Some extra info about the game from Nintendo World Report:

– Officially confirmed characters: Isabelle, K.K. Slider, Tom Nook, Mabel, Reese, Cyrus, Lottie and Digby;
– When you land on a space, a micro-episode of Animal Crossing happens;
– Your character is affected positively or negatively by this;
– Ex: Tom Nook could land on a space where it shows him smiling and sitting down;
– The events you land on are often specific to the character you choose;
– If it’s summer, you might expect the bug catching tournament or a Holiday to happen on a specific date;
– Other Animal Crossing mainstays are represented like villager interactions, the turnip stalk market (which has daily price fluctuations as well), and visitors like Gracie and Redd;
– Bonuses, events, little Animal Crossing dialogue trees.

– use amiibo to roll the dice;
– toggle to see what can happen ahead of where you roll;
– earn happy points and bells;
– corner of the screen shows an overall board map;
– every turn corresponds to one day in Animal Crossing;
– events come up based on date;
– there’s character backstory that you’ll hear;
– each game can be played as a full month;
– the date/month you pick will impact how the board looks;
– events you land on the board get you various happy points;
– whoever has the most happy points at the end of the game wins;
– bells will be converted to happy points;
– animals live in the town;
– your character will interact with animals that live in town;
– the host animal that explains all the board game rules also lives in the town;
– Katie likes to collect cards and also puts event spaces on the board;
– she’ll play games with you that let you earn stuff, such as playing high/low based on numbers;
– you earn item cards that let you do special things, like move a certain amount of spaces;
– interacts with Animal Crossing: Happy Home Designer via amiibo cards;
– use amiibo cards to invite animals to the boards game;
– if you designed a home for someone in Happy Home Designer, that home will be brought to the board game as well;
– K.K. Slider wears a guitar case as he moves around the board;
– buy turnips to gain money on the stalk market;
– can’t horde turnips longer than a week;
– board spaces show how much you can cash your turnips in for;
– characters roles in the Animal Crossing series are implemented into the board game as well;
– gyroids give you stamps portions, with gyroids in each corner of the map;
– collecting all portions to get a happy point bonus;
– Crazy Redd appears in game and adds special spots on the board;
– there is more to the game than just the board game, but details aren’t allowed to be shared just yet;
– The game will be available for purchase this Holiday season and will come packaged with two amiibo figures and three Animal Crossing amiibo cards.

The board layout can remain the same, but the spaces and even the environment changes, depending on which month players choose to play in. As in other Animal Crossing games, players can buy turnips and plan when to sell them for big money.

Another mode will challenge players to help animals gather supplies to build a raft and escape an island before time runs out.

Here’s the Facts Sheet for some extra details: 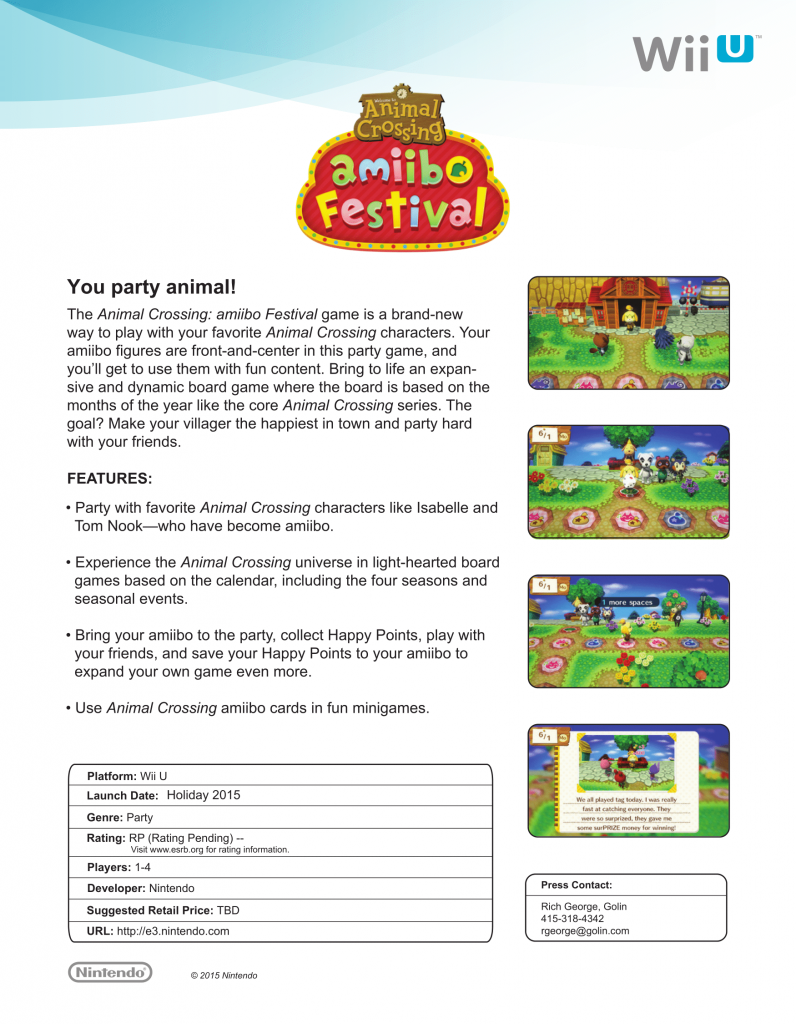 And below you can find the game’s trailer and screenshots galleries featuring both the game and associated Amiibo lineups.

(I think Nintendo needs to explain why Mable didn’t get an Amiibo figure!? They are sisters and are always seen together, why doesn’t she get the same treatment? 0.0′)