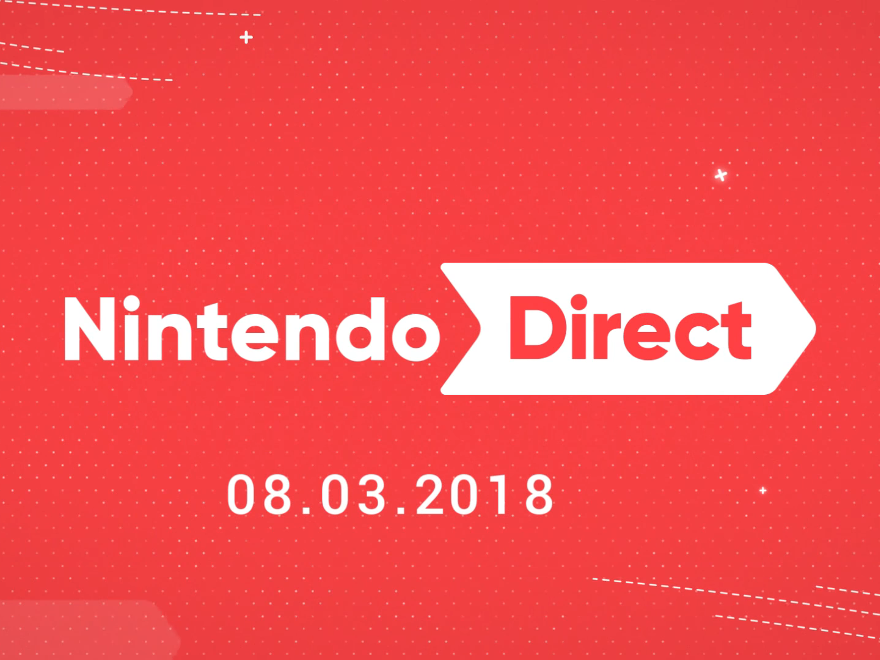 Nintendo released a new Nintendo Direct on March 8th, 2018 detailing new titles that will soon be released on Nintendo Switch and 3DS. You can find a roundup of all that was announced in all three versions of the Direct below, with Japanese exclusive announcements towards the end.

Note: You can find individual trailers for most of the following titles on the European, North American and Japanese Nintendo Youtube channels.

– Collection of 300 micro games, including classics and new additions
– Biggest entry in the series
– Familiar characters return with new looks

– Remake of the DS classic
– Contains an extra behind the scenes story about what happens to Bowser Jr. during the game’s main story

– Help Tim and Detective Pikachu figure out why Pokémon have been running amuck in Rime City
– The game is now available for pre-purchase on the 3DS eShop
– Amiibo is larger than regular amiibo at 13.6cm high and launches same day

– Story takes place after the bitter sushi struggles
– Musashi, the main character, was raised in a world where sushi is forbidden
– Musashi is waging an all out conveyor belt battle against the Empire to topple its sushi monopoly
– Gameplay revolves around eating sushi to pile up plates of matching colors on a table and then throwing them at your opponent
– Sushi Sprites might help you to unleash special moves to turn the tide of battle
– Contains an Online Multiplayer Mode

– Two new characters were introduced
– The first character is Tressa (Merchant), whose Path Action is Purchase which lets her obtain special items from townsfolk
– The second character is Alfyn (Apothecary), whose Patch Action is Inquire which lets him worm out info others aren’t privy to in standard conversations
– Characters start out with a base job, but they can equip an additional job to use in battle, which expands your strategic options
– A special edition of the game will be available on the day of release, containing a pop-up book introducing the eight characters and their places of origin, a helpful map for your adventure, and a replica coin based on the in-game currency. The NA version will also include a Soundtrack CD.
– The game’s soundtrack will also be available to purchase digitally at a later date
– Demo available on the eShop

– A Network Test will be held before launch, so players can try the game.
– An amiibo of Solaire of Astora will be released on the same day (GameStop exclusive in NA)

– More than 15 playable characters can be chosen from, including Mario, Luigi, Wario, Waluigi, Peach , Daisy, Rosalina, Yoshi, Donkey Kong, Bowser, Toad, Toadette, Bowser Jr., Chain Chomp, Boo, and Koopa Troopa.
– Various shots can be performed, such as the Basic Shot, Topspin, Slice, and Lob, among others
– With the new Zone Shot you can use motion controls to zoom in and pinpoint aim at a specific place first and shoot after
– Zone Shots are powerful, so they will damage rackets they come in contact with unless stopped with a Block, by returning a shot with perfect timing
– If a racket takes three hits, it will break and force you to forfeit the match if it’s your last racket
– Zone Speed makes things around you move in slow motion, allowing you to perform feats such as chasing down a Quick Shot
– Zone Speed also makes it easier to block Zone Shots
– To use Zone Shot and Zone Speed you will need to use up some of your Energy Gauge though
– The Energy Gauge fills up the longer you keep a rally going, but is easier to fill up by performing Trick Shots
– The Trick Shot allows you to get to balls that are far away from you, but is a risky move that may cost you your energy or points
– If successful though, a Trick Shot will greatly boost your Energy Gauge
– When the Energy Gauge is full, you can perform a Special Shot, which may even destroy the opponents racket in one hit
– You can also play using Simple Rules, where only Basic Shots are allowed
– Up to 4 players can play together, including in Online Multiplayer
– Online Multiplayer also provides access to Online Tournaments where you can gain special Participation Bonuses, such as outfits and characters
– Swing Mode allows you to use the Joy-Con to perform tennis racket motions and play casually with your friends and family
– A Pre-Launch Online Tournament will be held to let players try out the game before release

– Features new levels based on various kingdoms from Super Mario Odyssey
– Can now be played with a friend by sharing a pair of Joy-Con controllers, where one player controls Captain Toad, while the other assists by throwing turnips
– A 3DS version is also planned which features 3D visuals and touch screen controls

– All three original Crash Bandicoot games are debuting on a Nintendo system for the very first time
– The trilogy contains a hundred-plus action and platforming levels, playable as Crash and his sister Coco
– Everything (cinematics, animations, lush environments) has been fully updated since the original games

– All past DLC will be available for purchase individually or as a part of a Season Pass
– DLC 1: Danger Deck and DLC 2: From Dusk Till Casa Bonita will be available at launch
– DLC 3: Bring the Crunch will tell an additional story when it releases later this year

– Prelims will take place via Ranked Match mode and the 8 top players will move on to the Online Finals
– All finalist will receive a custom art piece created by the development team
– The event will be streamed live from Nintendo of America HQ, more details soon

– A livestream will be made available for fans to be able to watch the Splatoon European Championship Finals which will be held at Polymanga 2018 in Switzerland on March 31st, and a special concert hosted at the venue featuring Off the Hook’s Pearl and Marina and Squid Sister’s Callie and Marie
– Ver 3.0 of Splatoon 2 releases late April with over 100 new pieces of gear, extra stages (Piranha Pit, Camp Triggerfish and Wahoo World), and Rank X, an extreme rank higher than S+
– Callie will also appear in Octo Canyon after you meet certain conditions
– Splatoon 2: Octo Expansion is paid downloadable content containing a hefty new single-player mode
– In it, you’ll play as Agent 8, who looks like an Octoling and has lost her memories
– Splat your way through 80 shady underground test facilities in a massive subterranean world, where a variety of missions await Agent 8 and her talents
– Contains new stories that shed new light on beloved characters
– Upon completion, you’ll be able to join multiplayer matches as an Octoling
– If you purchase the Octo Expansion pass from Nintendo eShop, you’ll immediately receive Octo-themed gear to use in battle

– Inklings will likely make their debut as playable characters in Super Smash Bros.
– Mario and Link are also clearly hinted at, together with silhouettes of other veteran characters

If you would like to discuss any of this with me or other Nintendokusou readers hit up the comments section, Twitter, or our Discord Server.