Armikrog will finally be released on Wii U on August 23. The eShop lists a price point of $8.99 for North America and 9.99€ for Europe.

Armikrog is a point-and-click title, and will be appearing on Wii U nearly a year after its original debut.

Armikrog is a unique stop-motion, clay-animated, point-and-click adventure game from the creators of Earthworm Jim and The Neverhood. Unravel the mysteries of the fortress that holds Tommynaut and his blind alien talking dog Beak-Beak captive through exploration and puzzle solving!

Loveable characters designed by Doug TenNapel, creator of the Earthworm Jim, and developed by creators of The Neverhood, Ed Schofield and Mike Dietz.

RCMADIAX will be releasing Panda Love on the North American and European eShops on August 25. The game’s file size is 65MB.

You can find RCMADIAX’s announcement tweet with some screenshots below, followed by some footage of the title.

Our next #WiiU #eShop release is August 25th with #PandaLove! EXCITE!!! pic.twitter.com/cP08N9AP1M 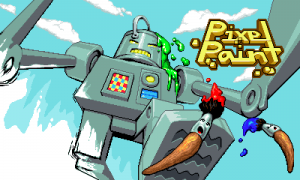 Pixel Paint is now confirmed for the North American and European 3DS eShops. The title will release on August 25 for $3.99/€3,99.

The game was originally released for Wii U in October 2014, but this new version has been converted for Nintendo’s portable. Here’s an overview of the game:

“Pixel Paint is an easily-to-use painting package that let’s players draw retro-style graphics from the classic days of video games. Using the stylus players can paint pixel-by-pixel making
it easy to create pixel artwork seen in many indie games these days.”

New features for the 3DS version include a shape tool to draw circles, triangles, squares and lines, the ability to export images to an SD card as a .JPG file, and Easer.

Just like on the Wii U version, Pixel Paint will still support the ability to share drawings on Miiverse.

It’s worth mentioning that BlockForm will only be playable on New 3DS.

You can find some gameplay footage below, courtesy of Nintendo Impact Gaming!:

Circle Entertainment has now revealed a North American release date for Adventure Labyrinth Story. The game will be out on September 1 on the 3DS eShop.

Adventure Labyrinth Story will hitting on Americas 1st of Sep. if you like Adventure Bar Story, don’t miss this one. pic.twitter.com/Z5jFvrw00A

Tom Happ recently announced in a blog post that Axiom Verge is coming to Wii U on September 1 in both North America and Europe.

Happ says Axiom Verge will likely have its best version on Wii U, since it’s the only console version with leaderboards for the Speedrun Mode, and it also features off-TV play as well as a map on the GamePad.

Here’s what Happ had to say in his blog post:

I’ve been waiting a long time to be able to say this: Axiom Verge will be coming to Wii U on September 1 in both the NOA and NOE regions!

When I first announced Axiom Verge about 4 years ago, there was tremendous excitement from Nintendo fans who had been waiting for years for a true 2D Metroid-style action/adventure/exploration game. Because of some technical issues, however, I wasn’t able to launch it on a Nintendo platform straight away. Some people were understandably upset: 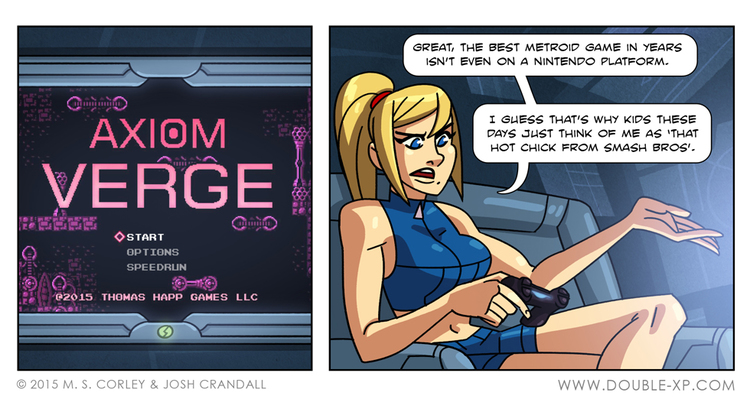 The Nintendo games of my childhood are what inspired me to make Axiom Verge. Metroid is probably one of the more obvious influences, but it’s actually a lot more than that. Axiom Verge actually started out as an exercise in game design. I wanted to deconstruct my favorite games from my youth and see what would happen if I took the best elements of each and put them together. The Bionic Commando’s grapple hook and Rygar’s Yo-Yo in the setting of Blaster Master and Shatterhand. I wanted to see what would fit together – and just as importantly what wouldn’t work.

But the influence of the olden times doesn’t end there. Remember glitches that would show up in the game if dust got in the cartridge? Remember Game Genie?

I used to love playing around with that thing. I used to love seeing what would happen if I started up one game and then swapped out the cartridge. It used to fascinate me as a kid that I could walk through a glitched wall into an area that was never intended to be seen. Or I could make enemies behave in strange ways. Sometimes it would freeze the game, and sometimes it would do something useful, but I just loved being able to experiment with all of that stuff. So I included glitching as a primary mechanic in the game.

There’s also another deep connection between Axiom Verge and Nintendo. Dan Adelman, who’s been working with me on the business and marketing side of Axiom Verge for almost 2 years now, was the one who started up the indie games business at NOA about 10 years ago. He’s helped tons of indies get their start from World of Goo to Cave Story to Shovel Knight.

So for so many reasons, Axiom Verge truly belongs on a Nintendo platform. It was only because of Blitworks’ amazing technical skill that we were able to make that happen, and I’m grateful for their work on the pixel-perfect port. Even though the game’s been out for a little while on other systems, the Wii U version is probably the best one. It’s the only console version to support leaderboards for the dedicated Speedrun Mode. And the Wii U GamePad will allow people to have the world map viewable at all times without pausing the game – or to play Off-TV.

It’s been too long in coming, but Axiom Verge is finally home.

You can also find some direct-feed gameplay footage below:

Thunder Lotus Games has confirmed a final release date for the Wii U eShop release of Jotun: Valhalla Edition. The will launch on September 8. 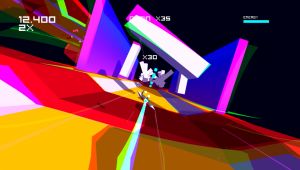 MixedBag’s Futurium EP Deluxe has been out on Wii U for some time, while the New Nintendo 3DS version of the game took a bit longer to develop, but it looks like the wait will soon be over, since MixedBag has announced on Twitter that the New 3DS version has passed Nintendo’s internal lot check, which means that as far as Nintendo is concerned, the game is ready to be released on their platforms.

MixedBag also confirmed that cross-buy with the Wii U version will be available, and that the game would run at 60 fps in 3D. A concrete release date is coming soon.

Monster Boy was announced earlier in the year, but only now has publisher FDG Games told Nintendo Life that “We’ll certainly bring this game [to] a Nintendo console. I can’t say more yet, unfortunately”, which seems like good news for Nintendo fans.

The side-scrolling adventure will let players transform into different animals to solve puzzles and progress through the world.

“A legendary game series returns with an all-new adventure! Monster Boy is a colourful side-scrolling action adventure created in cooperation with Ryuichi Nishizawa, the creator of the Wonder Boy* Monster World* series (* Trademark of SEGA Corporation Japan). Monster Boy is being created to bring back the enjoyment of classic games that shine by simplicity. Pure, exciting gameplay; upbeat music and smooth graphics. You’ll need to overcome huge bosses, find hidden passages, discover powerful equipment and use all your wits and skills to remove a powerful curse. Monster Boy can transform into 5 different creatures, each with their own skills and abilities. Take advantage of all the unique powers to open new paths and advance in an epic story. Monster Boy is a love letter to gaming from the 80’s and 90’s – will you join us and celebrate together with us?”

And you can also find a trailer and some demo footage below:

PixelMaker, an eShop app that allows users to easily design images and share them on Miiverse, was released on the Wii U back in May, and is now making its way to 3DS too.

This will be the first title on the portable from developer Nostatic Software. It’s currently running only on the New 3DS, but Nostatic hopes to make it work on the regular 3DS as well.

PixelMaker will be our first release on the Nintendo #3DS pic.twitter.com/6klrXqgpso 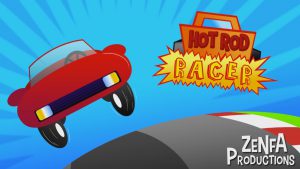 Hot Rod Racer will soon be getting its first patch.

In the update, ZeNfA Productions will be introducing a new mode that features a health system.

The 1st Patch for Hot Rod Racer is almost done. This will introduce a new mode, where you have a health system! Classic Mode still exist too

You can find the video interview below:

Besides that, we have some footage from the Gamescom Twitch stream, where Image & Form showed off SteamWorld Heist for Wii U. Give it a watch below:

13AM Games has recently told Nintendo World Report that cross-buy is planned for Pirate Pop Plus, which means if you pick up the game on either Wii U or New 3DS, you’ll get the other version for free.

You can also catch a glimpse at some off-screen gameplay footage from Gamescom below: 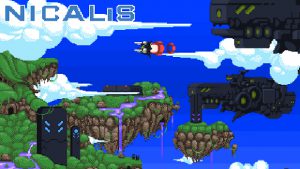 Various Nicalis games have been discounted on the North American Wii U and 3DS eShops, letting players save up to 30% on their titles until August 29.

The discounts are as follows:

The game’s developer has recently put out a new trailer for the Steam version, which you can watch below, while you wait for it to release.

Snowcastle Games has prepared a new trailer for Earthlock: Festival of Magic. You can watch it below:

Below you can find gameplay footage from various upcoming and recently released indie games. Some of the footage from upcoming games comes from the recently held Gamescom convention.