Dragon Quest VII’s North American website is now fully open. You can find it over here.

Nintendo of France has also prepared a new Dragon Quest VII video showing the changes the 3DS remake has made to the original release back from 2001. You can watch it below: 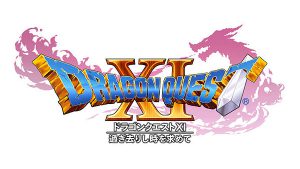 The development of the RPG’s scenario is now fully complete, and Square Enix is currently implementing maps, scenarios, and other elements. It’s now at the stage where you can get an impression of what they are about, but the details are still being fleshed out.

Horii recently met with Square Enix’s Yosuke Saito for a five-to-six-hour business meeting. The check of an episode took three hours, and various other ideas came into discussion. The response speed of the 3DS’ 3D mode was specifically being checked, which will be applied to the 3DS version’s 2D mode and PlayStation 4 version. Battle checks were also done for the PlayStation 4 (and perhaps NX) version. 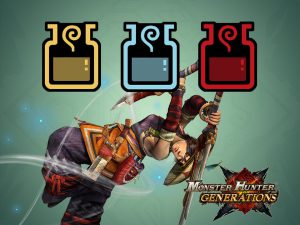 Players can now download the Competitive Edge Pack at no extra cost.

A few items are included in the DLC. They are the following:

Capcom has prepared two new Monster Hunter Stories videos. Both can be found below, in addition to a new segment of Capcom TV about the game.

We also have news about a collaboration with the manga Himouto! Umaru-chan by SankakuHead. The game will feature a costume for Nabiru, which is based on Umaru-chan’s hoodie.

The big addition to Phoenix Wright: Ace Attorney – Spirit of Justice was the extra “Turnabout Across Time” case. Capcom also created costumes for Phoenix Wright, Apollo Justice, and Athena Cykes plus a couple of brief non-canon stories that mainly featured the former two characters. So you can expect all these Japanese additions to make it over to the West in the near future.

The first blog focuses on the returning rookie attorney Apollo Justice, who will hold down the court while Phoenix Wright is away in the Kingdom of Khura’in. We also get our first look at newcomer Nahyuta Sahdmadhi, who will serve as the opposing prosecutor in this game. Not only will Phoenix be facing off against him in faraway lands, but it appears that Nahyuta will make an appearance in Apollo’s home turf as well.

You can read the full blog posts here and here.

Besides these, Capcom has published the third development blog, which cab be read over here.

Furthermore, you can now download a demo for Phoenix Wright: Ace Attorney – Spirit of Justice to your 3DS. The download features a section from the first courtroom battle between Phoenix Wright and his new adversary, royal priestess Rayfa, in the foreign Kingdom of Khura’in. It takes up a total of 890 blocks (111.25MB). You can find some gameplay footage of the demo below:

Finally, Capcom has released an 8-minute prologue video, which shows the events that  happen before the game, such as rumblings of a legal revolution in the Kingdom of Khura’in begin and Phoenix receiving a mysterious phone call while taking on a trial in the United States. You can find that video below, followed by a second video focusing on the voice cast of Phoenix Wright: Ace Attorney – Spirit of Justice, this time focusing on Apollo’s voice actor, Orion Acaba. 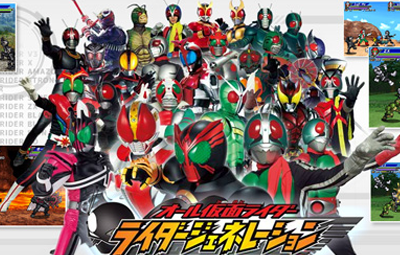 According to the latest issue of Famitsu, Bandai Namco is currently working on “All Kamen Riders: Rider Revolution” for 3DS, which will be a side-scrolling action title with several historical Kamen Riders appearing in it.

Confirmed Kamen Riders so far include:

All Kamen Riders: Rider Revolution is 70% complete so far, and the game is schedules to launch this Winter in Japan.

In the game, players can take on the opening parts of the upcoming retail version, Digimon Universe: Appli Monsters including battles. By checking in every day, you can receive various items, and it will later be possible to transfer save data to the full release. Appmon Chips are compatible as well.

Two characters have been introduced, according to Gematsu’s details:

You (Boy or Girl)

– Second-year student at Hifumigoaka Middle School
– Can be a little hot-blooded
– His buddy Appmon is the online game app Appmon, Onmon
– With his Appli Drive in hand, he’ll meet, battle, and train various unseen Appmon, while unfolding a grand story

– Your childhood friend, Naoto
– You played with him often as a child
– Recently he has drifted away
– His buddy Appmon is the offline game app Appmon, Offmon

You can find some new artwork and screenshots in the gallery below:

Bandai Namco and Ganbarion have announced that after the initial launch of Dragon Ball: Fusions, free updates will be handed out to players.

Dragon Ball: Fusions’ first update is planned for Autumn. A new stage will be added, which features space-time rifts when Wi-Fi waves are found.

Bandai Namco has also released another video from the game that gives us a look at time trial challenges. Check it out below:

The new characters include CP0 agents Rob Lucci and Spandam. Rob Lucci, who has his Zoan transformation, is being included on the roster, while Spandam will act as an assist character who uses his sword to slash though foes. Wanda, Nekomushi, and Inuarashi are also in as assist characters.

You can find the new One Piece: Great Pirate Colosseum scan below, showing all of these characters plus a look at the story mode, courtesy of ShonenGamez. 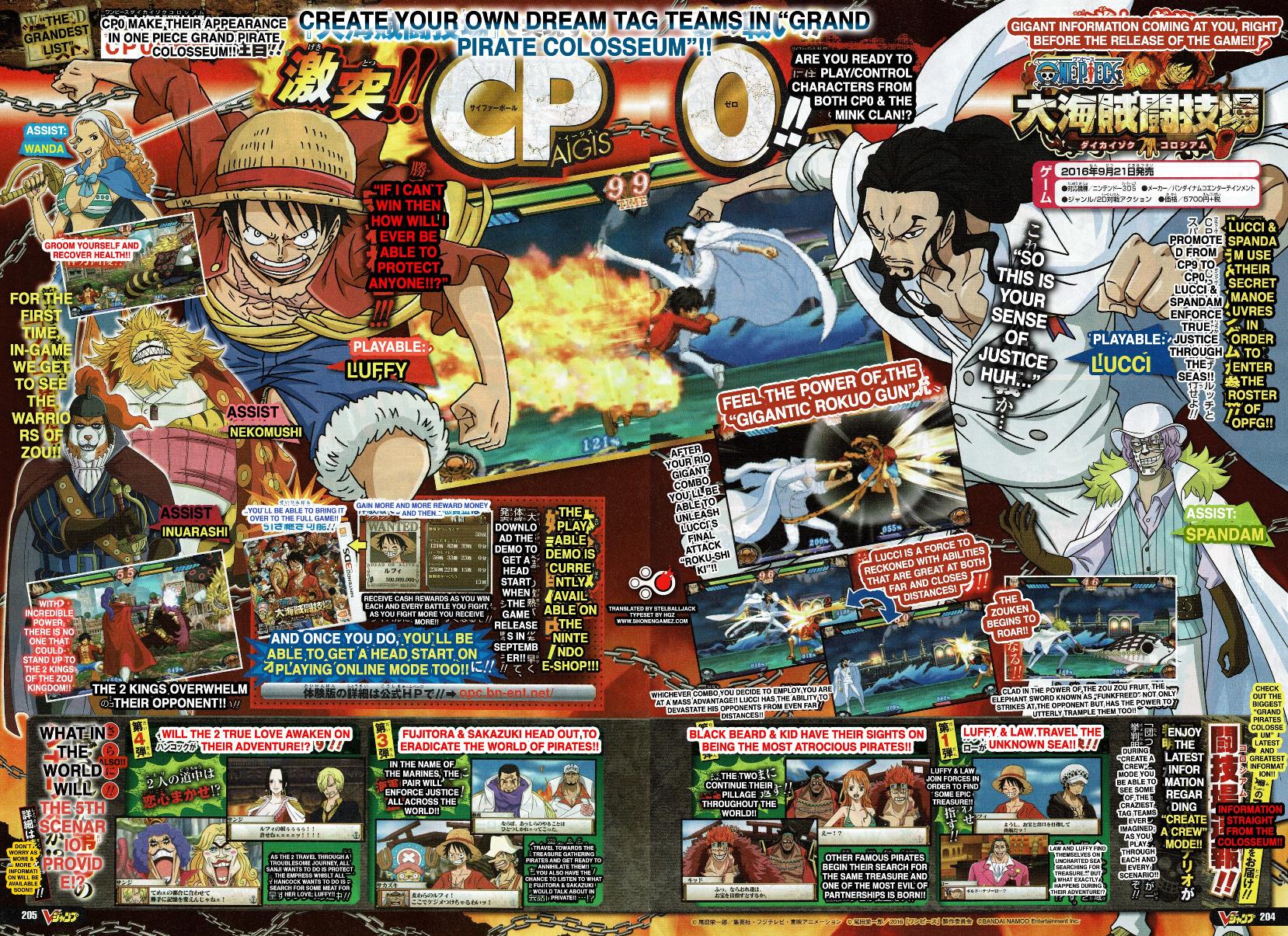 SEGA recently showcased the first footage from Puyo Puyo Chronicle in the company’s regular live show hosted on Niconico. Check it out below:

A new Japanese Sonic Boom: Fire & Ice video is now online showing off Sonic’s action skills, the air dash and speed dash. SEGA also showcased the game during its live stream program on Niconico. You can find boths videos below:

XSEED Games has added some more footage of Corpse Party to their Youtube page. Check it out below:

Inti Creates has now sent out some new screenshots and a facts sheet for the English version of Azure Striker Gunvolt 2. We also got a ton more gameplay footage besides that, and you can find it all below. 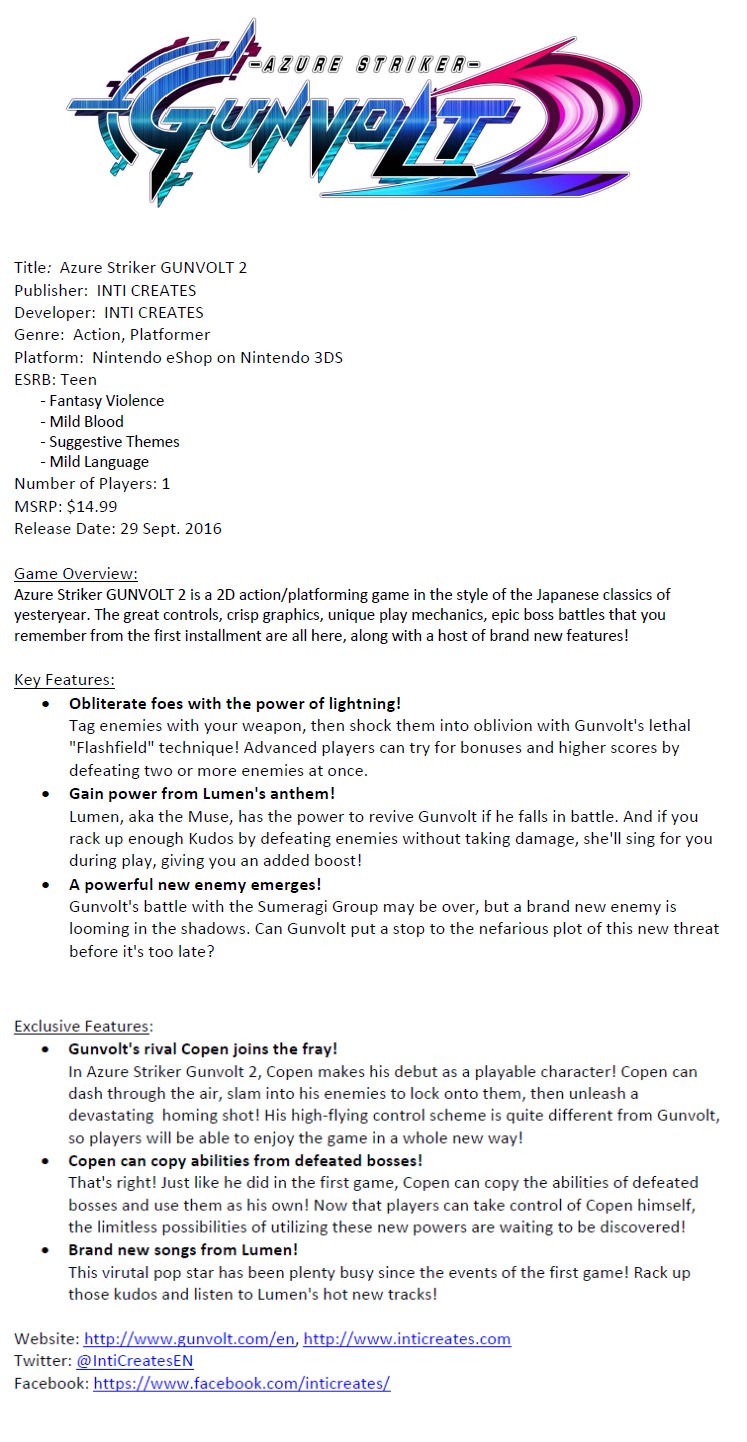 Konami has revealed that it has Jikkyou Powerful Pro Baseball Heroes in development for 3DS. The news was recently delivered during a live stream announcement a few minutes ago.

This is the first ever entry in the Jikkyou Powerful Pro Baseball series to come to the 3DS. It’s scheduled for release this winter in Japan. 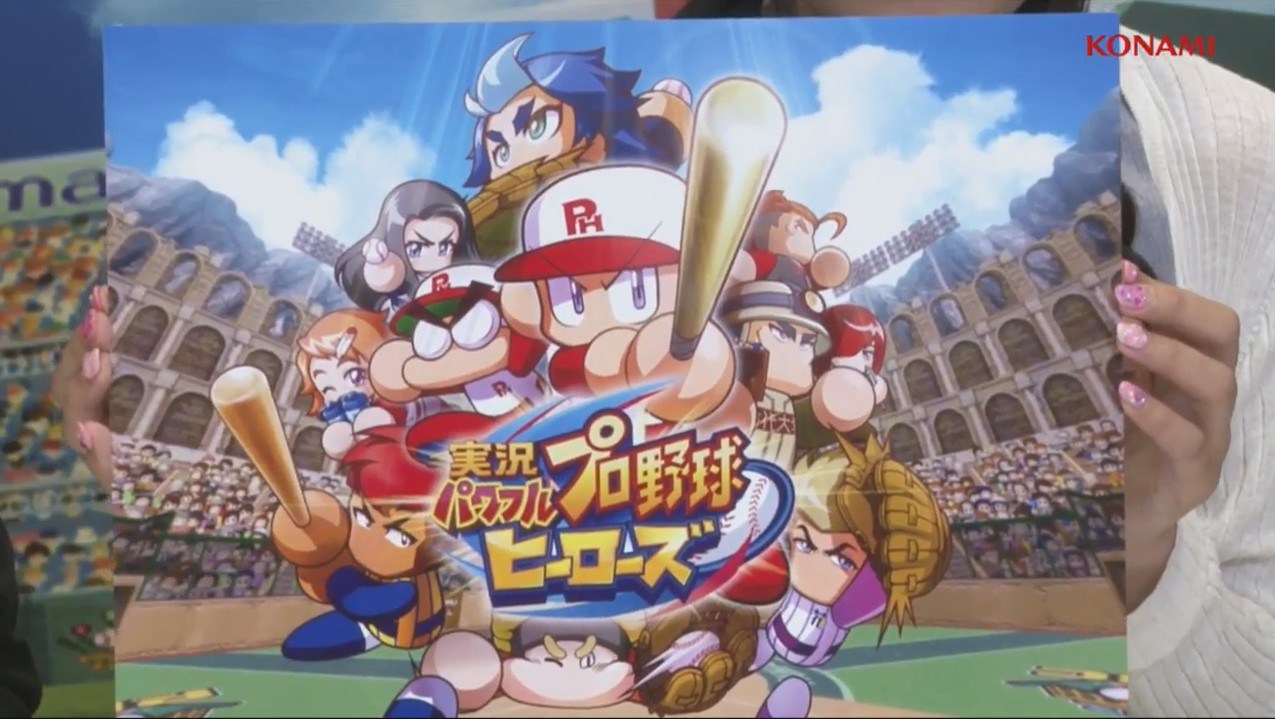 The latest issue of Famitsu brought with it the announcement of RPG Maker Fes for the 3DS. 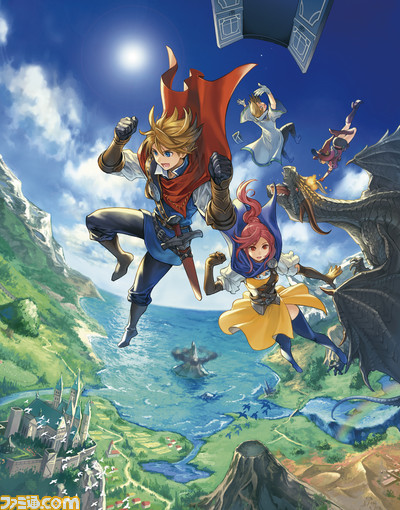 A listing on Amazon Japan has now confirmed that the game will be released on November 24.

Details from Famitsu show that the game will let you create your own art assets, but it will also feature many preset assets to make designing it easier. Furthermore, there will be a free 3DS app called Maker Player, which will let you play the RPGs that others make without needing to buy the program.

In the gallery below you can find several screenshots of the software.

Family Gamer TV has got a closer look at the new Harry Potter content on the way to LEGO Dimensions as part of Wave 6. Check out their video below:

Family Gamer TV also uploaded 30 minutes of new Skylanders Imaginators gameplay to their YouTube channel. Several different characters are shown off in the video, including Crash Bandicoot and Dr. Cortex. You can watch the video below:

Below you can find new trailers from Virtual Console games that were recently released on the Wii U and New 3DS eShops.