Another week, another Splatoon update! This time around the game is getting yet another new weapon, the Sloshing Machine Neo, which includes the Point Sensors Sub Weapon and the Inkzooka Special Weapon. You can find a few screenshots and a video overview of the weapon below:

Moreover, the Play Nintendo YouTube account is continuing its “Super Play Time” video series with another two entries with tips and tricks for Splatoon, which you can watch below:

We also got an announcement for the 10th North American Splatfest during the week. The event should begin on January 15 at 9 PM ET / January 16 at 12 AM ET, and will ask players if they would prefer to travel to the past or the future. 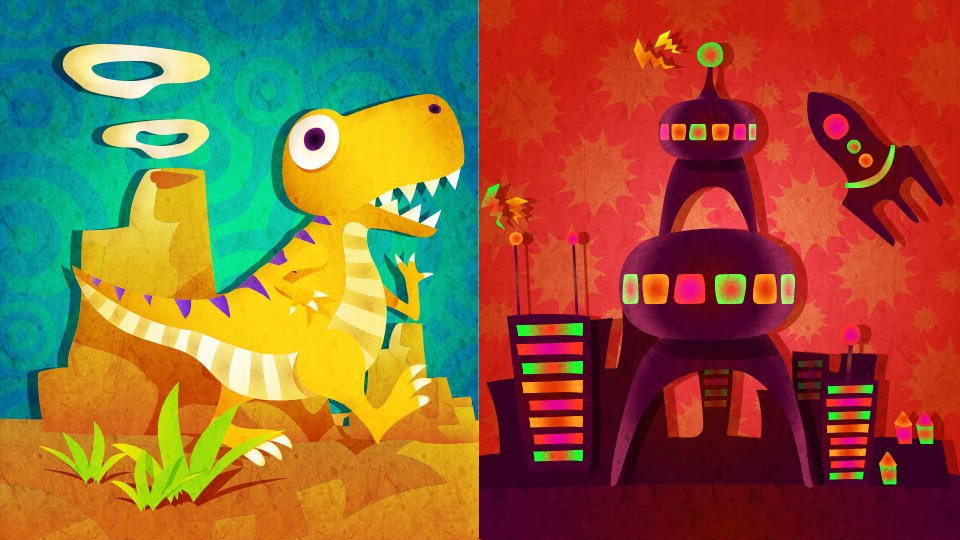 In other less important but still interesting news, Splatoon is getting two weekly manga serializations on Famitsu. Kino Takahashi will launch the “Honobono Ika 4-Koma”, which is a four-panel comedic manga, while different manga creators will contribute stories to “Play Manga”, which aims to capture gameplay experiences in manga format.
(I’m personaly curious to see if this will lead to another crossover with the Ika Musume manga or maybe a short form anime of some kind.) 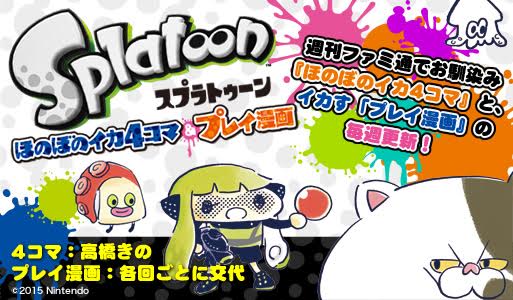 Finally, Takara-Tomy recently launched a new line of seven different wrist watches dedicated to Splatoon, since the game as been selling extremelly well in Japan. Here’s a look at the watch lineup: 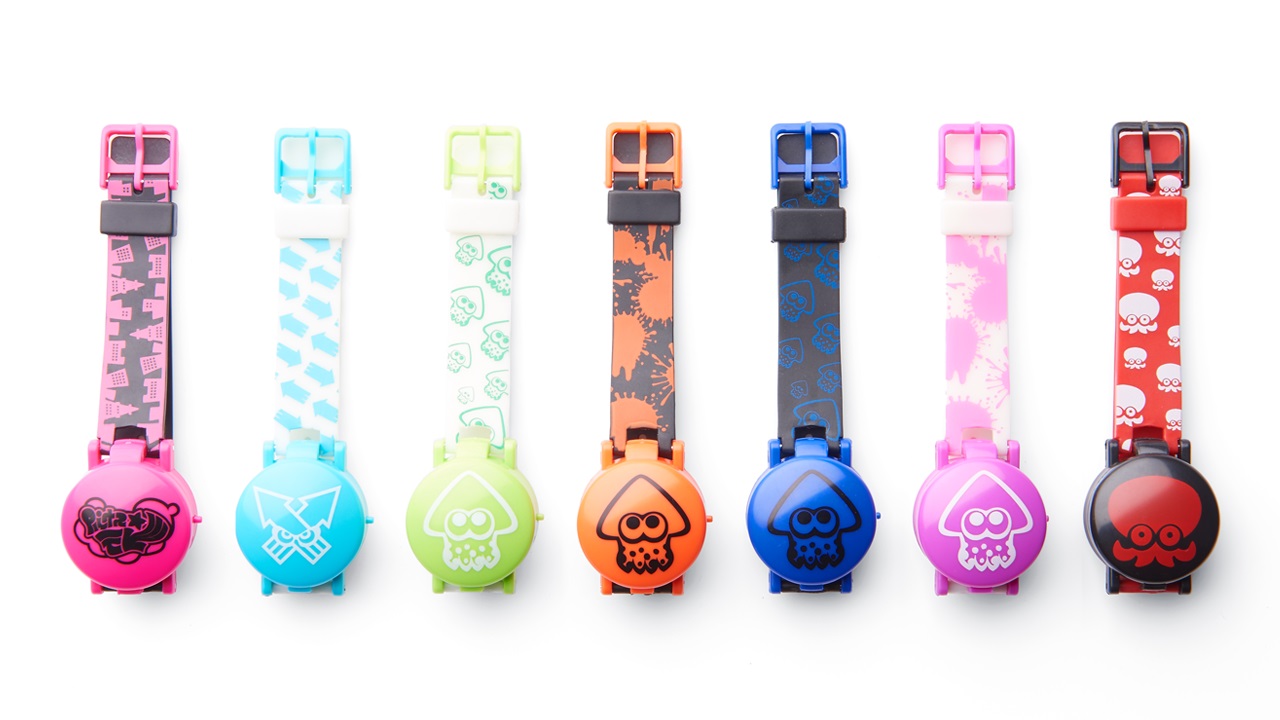 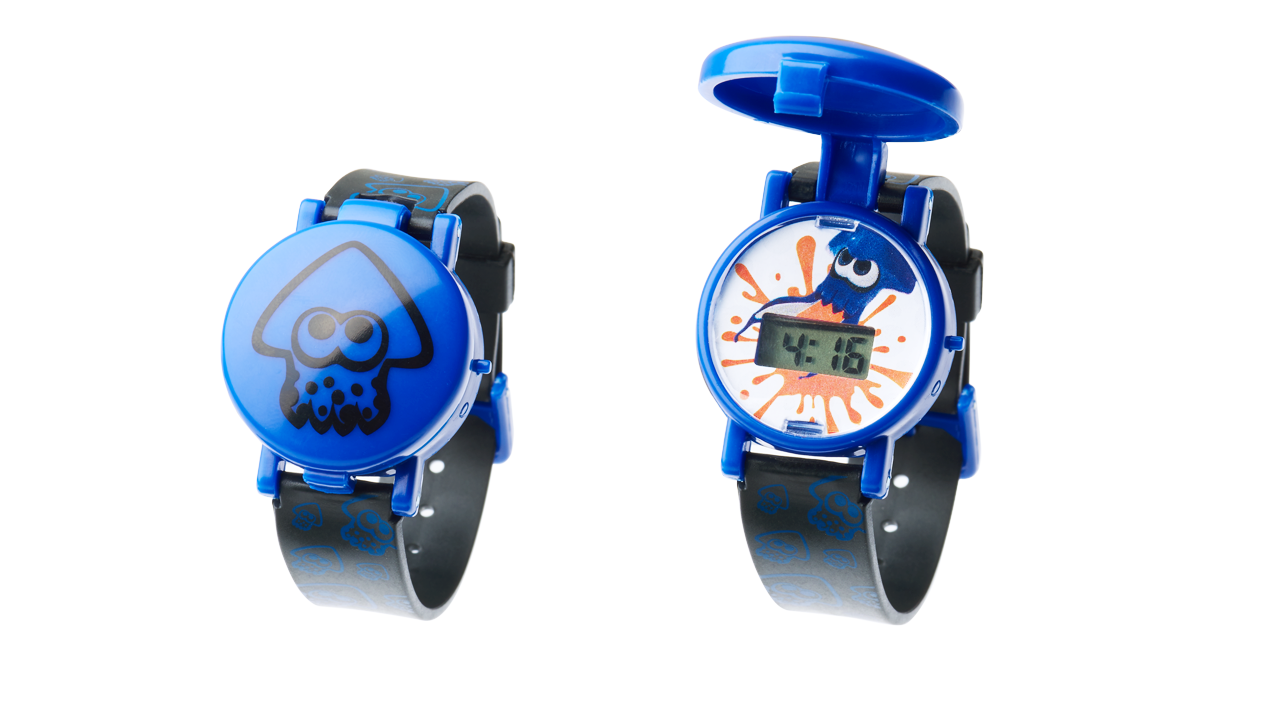 Another new Event Course and costume have been added to Super Mario Maker this week. By completing the Southwest Air Adventure course, players will unlock the Sky Pop outfit. You can find a course overview below, followed by a trailer for the costume and some footage of the course itself.

“Take to the skies through an adventure course designed by Mario fans from Southwest Airlines! Clear it, and you’ll unlock an exclusive Mystery Mushroom costume based on the Sky Pop airline from Super Mario Land!”

Nintendo released another Mario & Luigi: Paper Jam commercial for North America. You can find it below:

Nintendo has provided a look at the entire third set of Animal Crossing amiibo cards on its Japanese website. You can find an image with all the cards below, or zoom in and look at individual cards themselves by visiting the official page here. 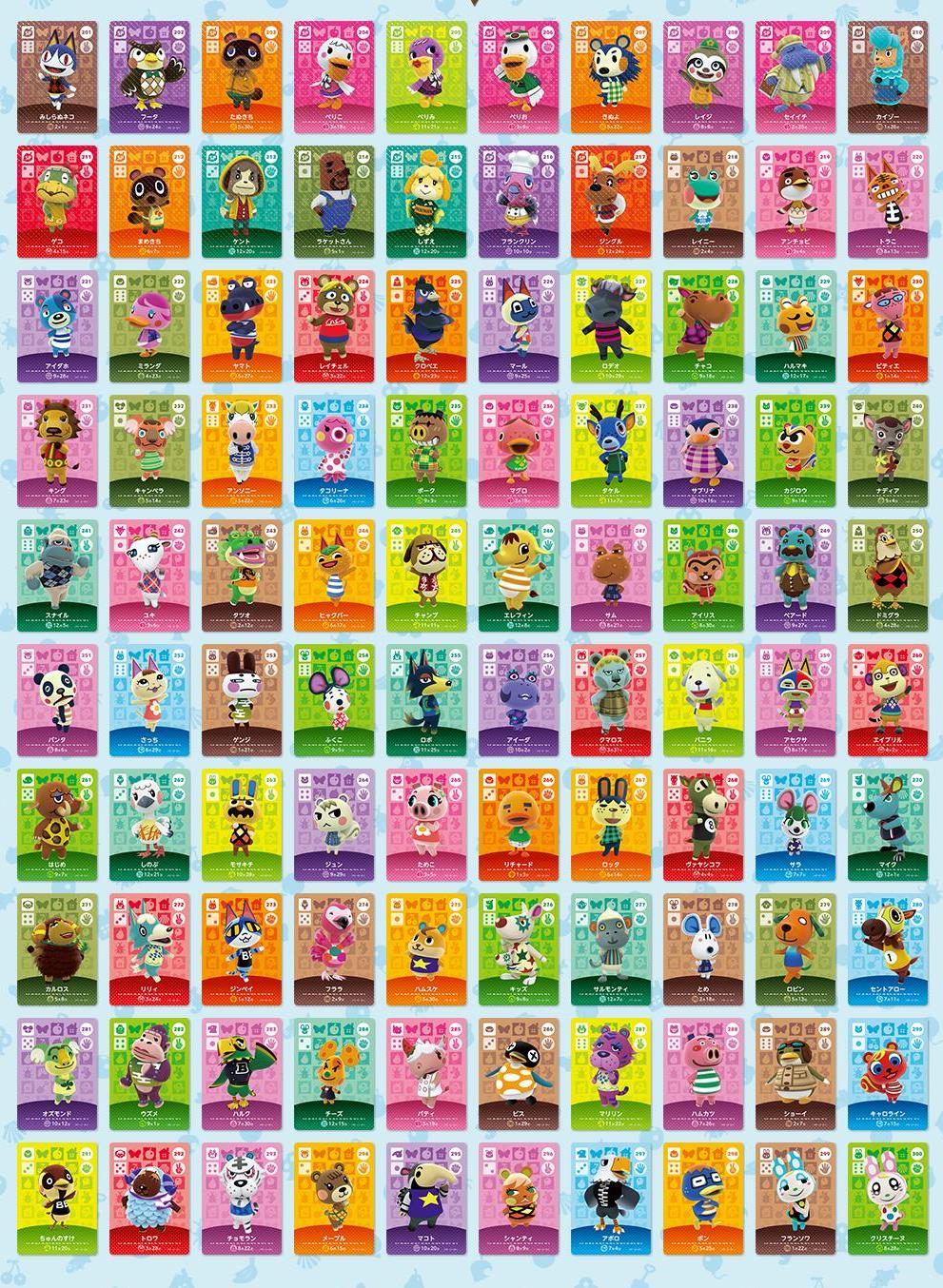 Polygon has posted another 14 minutes of footage from Fire Emblem Fates. It shows the early gameplay that leads up to the part where you decide to side with Hoshidoor Nohr. It’s mostly similar to previous gameplay videos but features no commentary and some extra scenes. Check it out below:

Genei Ibun Roku #FE was released in Japan back in late December and Famitsu reviewed the game a bit before that, giving it a score of 8/9/9/8. Nintendo Everything translated the comments of the reviewers so we could take a look at the reception of the game. You can check the review over here.

CD Japan is also offering a bonus poster with first press copies of the soundtrack, while mu-mo will include a character acrylic charm set for Tsubasa, Itsuki and Toma.

You can find a full lineup of the included tracks below :

Koei Tecmo recently uploaded a new video for Hyrule Warriors Legends with some gameplay presented by producer Yosuke Hayashi and voice actress Ruriko Aoki. You can find the video below, followed by a new commercial for the game.

Bandai Namco revealed during the week that it will be announcing another fighter for Pokkén Tournament on January 15. Like what happened with Sceptile, one clue was shared with players, that being that the Japanese name of the new playable Pokémon has the character ラ (ra) in it. Another support Pokemon will be revealed as well. 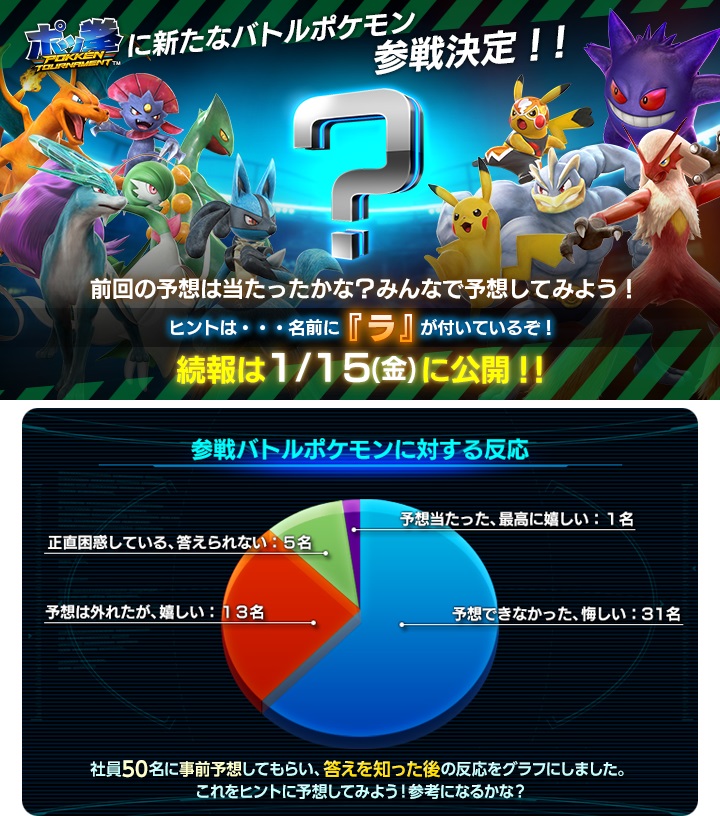 50 staff members attempted to predict which Pokémon it was and their reactions were polled after knowing the result (as you can see by the image above). You can find the results of the poll below:

Since we know the next fighter has a ラ (ra) in its name, here’s a list of possible Pokémon:

(My bets are on Swampert or someone totally ridiculous…)

Early in the week, Nintendo and HAL Laboratory unveiled a sequel to their hit 3DS eShop game, BoxBoy!. This sequel is called BoxBoy: Mou Hito Hako (roughly translated – BoxBoy! One More Box) and was released on the same day in Japan.

In the new game, players can once again control Qbby, who has the ability to create boxes just like in the first entry. As always, you need to head to the goal while passing through various obstacles. However, Qbby is powered up in this title, as he can now dish out two boxes at a time. Nintendo also confirmed that the stages have been powered up as well, and await Qbby with new gimmicks.

Medals collected in the different levels provide costumes, musics and comics. Those with save data from the first BoxBoy! can also use the costumes from that game.

BoxBoy: Mou Hito Hako is available on the Japanese eShop for 680 yen, and 712 blocks of free space are required on an SD card for the download.

You can find the official trailer and some gameplay footage from the game below: 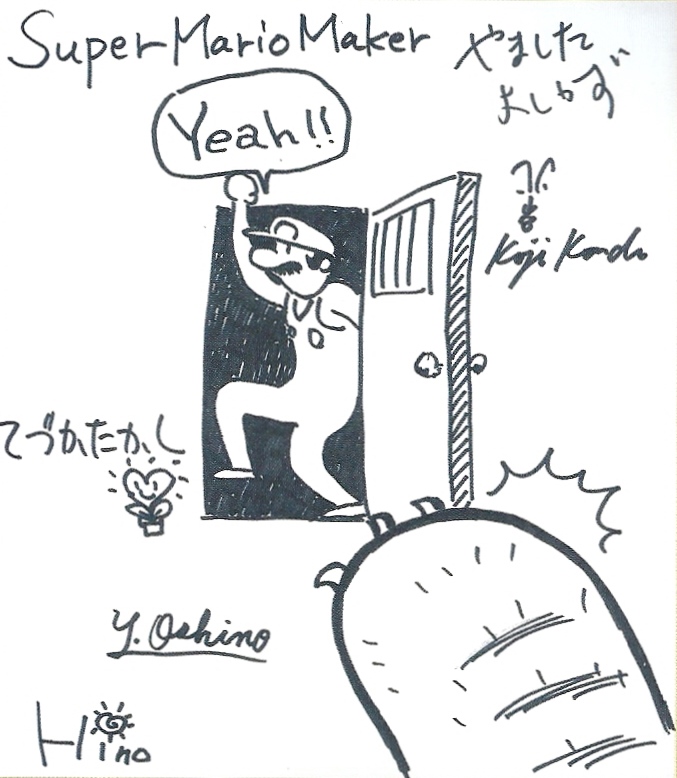 Continuing from last week’s collection of handmade drawings by industry developers to celebrate the new year, we once  again have more similar content from Japanese magazine Nintendo Dream. This time it features various game developers and other key members related to the industry, including from Nintendo, Capcom, Square Enix, and others. You can check out the translated messages and drawings over at Nintendo Everything’s page.

The first topic discussed during the interview was Splatoon. After Sankei mentions that it’s selling well, Kimishima said that painting colors as a way of battle and the characters allow it to be accepted by a family audience. He added that, in the future, it’s possible to extend it widely like Super Mario Bros.

Regarding sales, Kimishima acknowledges that the Wii sold a great deal, so the hurdle of migrating to Wii U was high. Nintendo wants to get consumers to understand new ways to play like Splatoon and speed up the migration. For 3DS, Nintendo increased the performance and released popular software, so there is still room for growth.

Kimishima also shared some brief words about mobile. Nintendo wants to provide a means of play that is different from consoles, such as progressing through a game for a short time each day.

Speaking about the aim of My Nintendo, Kimishima said the goal is to collect points by playing Nintendo games, and obtain bonuses in places like movie theaters and theme parks. There will be more chances to touch (get in contact with) the characters, and Nintendo wants to expand various kinds of businesses.

Finally, on the topic of NX, Kimishima noted that it will need to be an attractive system that gets them to jump in. He also reiterated said that Nintendo aims for it to be a new experience totally different from Wii U and 3DS, and development is steadily progressing.

Nomura Securities has recently shared some speculation about the timing of the reveal of the NX console. The concept of the system could potentially be announced between March and May, followed by an actual unveil in June (similar to the Wii U). It may then launch between October and November.

Here’s an excerpt from an article by Barrons:

According to analyst Junko Yamamura, Nintendo will make NX available by 2016 year-end’s shopping season. Nomura expects Nintendo to announce the “concept” sometime between March and May, unveil the actual console in June, and launch it between October and November. “We think the NX will start to boost operating profits in 18/3, when it will have been on the market for a full year and will have a line-up of software titles, which carry high operating margins.”

These news were released at the same time as Nintendo stocks dipped by 5 percent. Nomura Securities feels that the NX will cannibalize the existing sales of the Wii U and 3DS.

The 16th annual Game Developers Choice Awards will be held in March. During the week, the nominees for the various categories were announced, which obviously include some Nintendo games, these being Splatoon and Super Mario Maker. Neither one was selected for potential Game of the Year, but are being considered for the following categories:

For other nominees and categories, you can check out the GDC article on the matter over here.