Nintendo released a montage trailer of all the games that were at their booth during BitSummit, a Japanese indie event. You can find it below:

Fairune 2 is out in Japan starting today, July 13. The 3DS eShop game will sell for for 800 yen. The game will eventually come to western shores too. Meanwhile, enjoy the Japanese trailer: 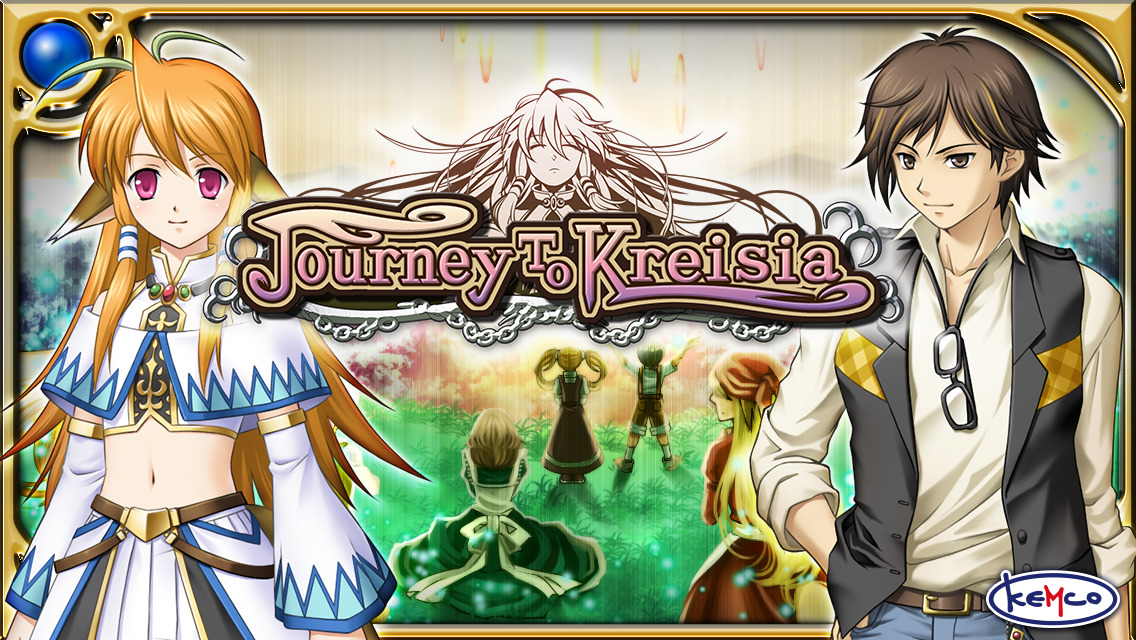 Journey to Kreisia will be out on the European and North American 3DS eShop on July 14.

Here’s an overview of the RPG from Nintendo’s website:

While attempting to skip out on a homework assignment and meet up with his friends at the arcade, a teenager by the name of Yusis is suddenly enveloped in a blinding light and transported to Kreisia- a world where fantasy meets reality.

Soon after, he learns he has been summoned as a Savior to deliver Kreisia’s people from the threat of the Overlord. Thinking everything happening around him is simply a dream, Yusis readily agrees to the task of saving the world and begins preparing for what is inevitably to be far more than he ever bargained for!

Blazing a new trail in classic RPGs, Journey to Kreisia is bound to please fans of the genre with plenty of engaging features such as hunting for hidden treasures, testing one’s strength in challenging battle arenas, and taking up a variety of subquests! Customize the fighting technique by raising weapon levels, equipping various orbs, and using extremely handy monster guide when in need of more information to perfect your battle skills!

Adventure Labyrinth Story is coming to the European 3DS eShop on July 21 according to Circle Entertainment’s Twitter account.

The company also shared some english screenshots of the game:

Defend Your Crypt is slated for July 21 in Europe, for both the 3DS and Wii U. The North American region still doesn’t have a concrete release date though.

Here’s the European trailer for the game:

Ancient has now opened up an English site for Gotta Protectors, confirming the release date for North America.

Ninja Smasher, PUMO’s latest title for the 3DS, is releasing in Europe on July 21 for €3.55. North America should be getting the game soon too.

Also releasing on July 21 is Petite Game’s Toon Tanks, which is finally coming to the European region, and will be priced at €1.99. 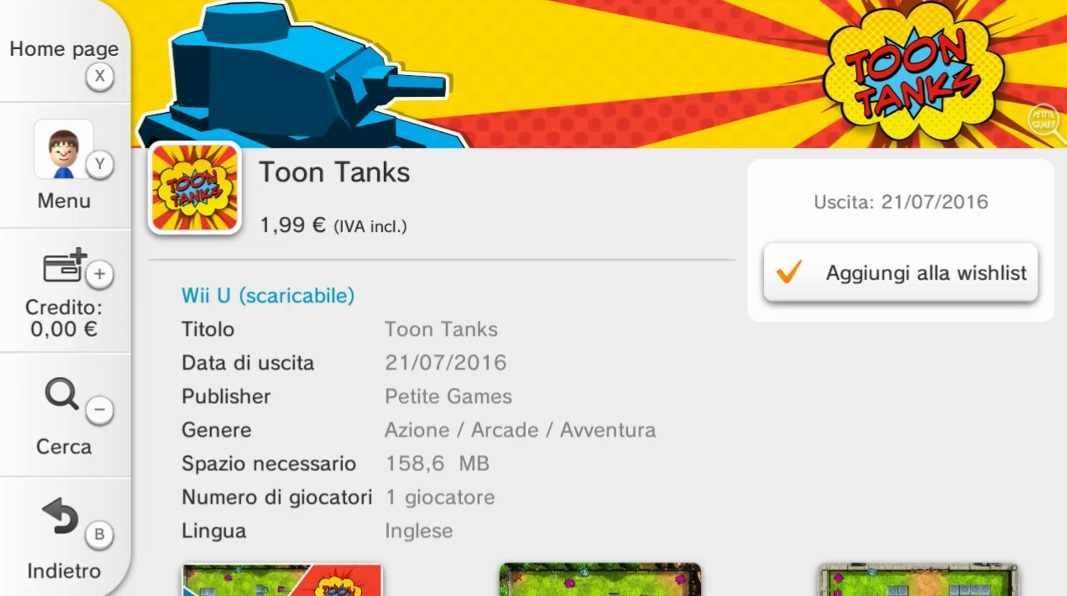 Red Column has announced that 3Souls – Episode 1: Nelesa will release in Europe on July 28, and a North American release will follow “a few weeks later”.

3Souls makes use of the GamePad for gameplay, and the co-op mode incorporates the use of a Wii Remote or Wii U Pro Controller.

The new trailer for 3Souls – Episode 1: Nelesa can be found below:

Petite Games is releasing another Wii U title called Laser Blaster, which is coming out later this summer on the eShop.

Petite Games hasn’t shared much information yet, but posted a few screenshots to Twitter:

Nexis Games has been tinkering with its Wii U eShop project UCraft, but in addition to that the indie developer will soon be coming out with “Draw the Line”.

It seems to be a first-person shooter, where some sort of mysterious threat is present, and you’re the only hope for humanity.

The game should release in the coming months.

The Girl and the Robot

Flying Carpets Games recently posted on Kickstarter that The Girl and the Robot will be debuting on Steam later this summer. Console versions will be coming later in the year, which includes the Wii U one.

A new trailer for the game was also released with these news:

It was confirmed last week that Back in 1995 is making its way to 3DS. The game was also shown at BitSummit. This new version is called “Back in 1995 64”. On the lower screen, you’ll see a Virtual Game Console. Sometimes irregularities will occur which will hamper the gameplay on upper screen, such as cables getting loose or cartridges needing to be re-inserted, reminding people of things that actually often happened 20 years ago.

Back in 1995 was released on Steam earlier this year, and was created as a love-letter to the survival horror and mystery experiences from the PlayStation days. In the game, players “uncover the mystery surrounding the disappearance of your daughter, the catastrophe that shook the city, and why you’ve decided to finally return”.

The game should be compatible with all of the 3DS line, but there’s a chance it might only make it as a New 3DS game, so stay aware of that fact.

You can watch a trailer for the original version below:

Over My Dead Body (For You)

DuneWorld Games has recently announced Over My Dead Body (For You), a puzzle title it’s developing for Wii U, and will be coming to the eShop.

In it, players control a ghost and a zombie as they navigate through levels filled with puzzles and enemies. You’ll need to “sneak past guards, possess your former co-workers, and take in an all-you-can-eat adventure”. DuneWorld includes 20 levels, challenge modes, and much more.

Over My Dead Body (For You) is tentatively targeted for an October release, with a $9.99 price point.

You can find the announcement trailer below: 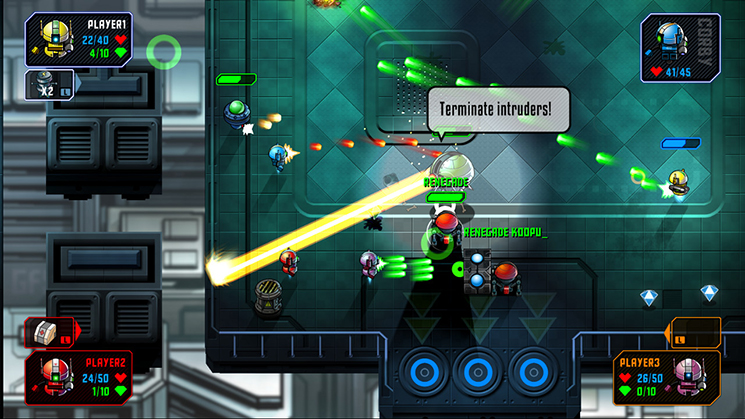 The patch adds off-TV play, new character upgrade options (speed/agility can now be upgraded), and fixes a number of bugs.

Gray Fin Studios says that the second Dual Core update is already in the works as well.

Those in Europe don’t need to worry, since they have had access to the first update since launch, as it was built into the game from the start.

Image & Form has released another episode of The Engine Room, and has revealed in it that an hat pack is coming to SteamWorld Heist.

Players can participate in a special event where they design a hat that will be included in the upcoming DLC. Designs can be submitted here through July 31. If you win, you’ll become a SteamWorld Ambassador, which means you will get free keys of every SteamWorld game plus access to exclusive information about the new entries as they progress.

You can watch lastets episode of The Engine Room below:

Teku Studios has posted a new making-of video dedicated to Candle that shows how the team created the game’s graphics in a handmade, traditional way. Check it out:

New screenshots from Quest of Dungeons have been released, and these show off the 3DS version of the game. You can look at them in the gallery below: