– Begins with the Mario & Luigi cast in the castle;
– The group sees a paper version of the pricess;
– Lots of humor;
– One of the E3 demo had a giant, robotic Mario held up by little Toads battling robotic Goombas;
– Terrain and inhabitants in the game are rendered in 3D;
– Perspective follows more closely that of Mario & Luigi rather than Paper Mario;
– Folding effects into the matches like the Paper Mario games;
– Card decks are new to the title;
– Earn cards by gaining points;
– This seems to be based on a star meter in the top left corner;
– Up to three types of cards take up the entirety of the bottom of the touch screen;
– Touch them to add an effect to the battle;
– Ex: making you stronger, disarming your enemy in some way;
– Cards are sort of like a Hearthstone element;
– Options of items, jump and hammer attacks, specials and run are available in battle;
– Mushroom houses, levelling up Mario poles after matches and identical items are back;
– Each enemy has a text box beneath showing what level they are;
– Ex: level 7 sand monster at the beginning of the E3 demo.

Here’s some gameplay footage from GameXplain:

Here’s the Facts Sheet for the game and some details Nintendo Everything compiled: 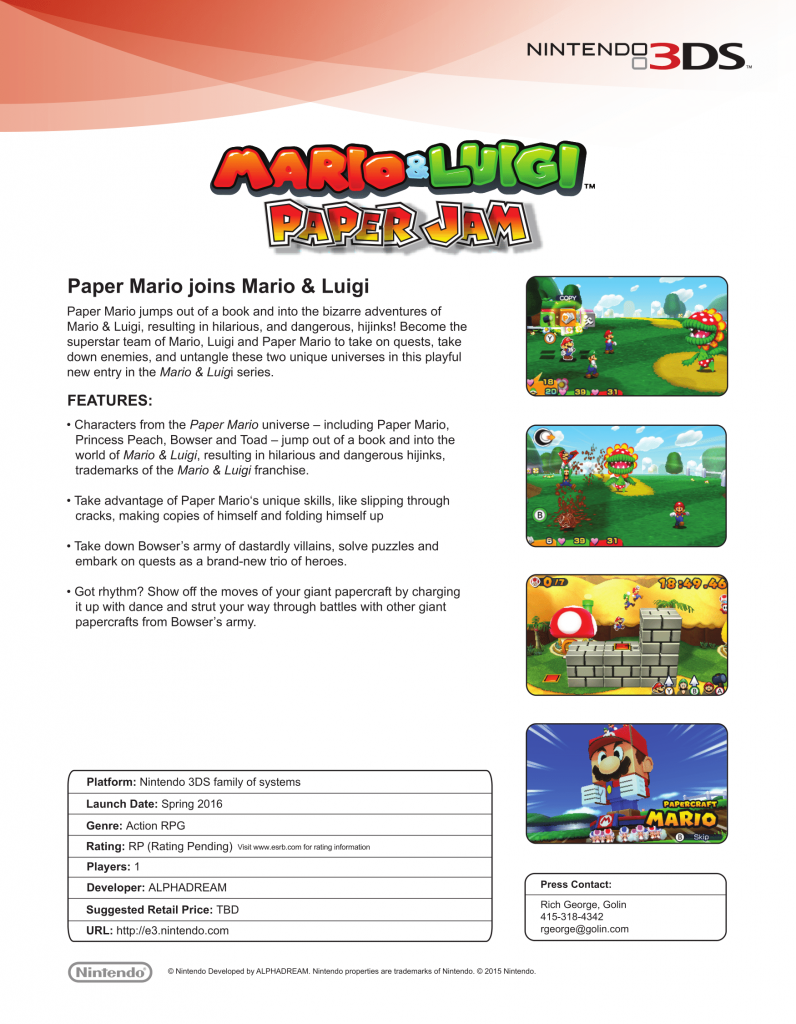 – Quest mode: find seven Toads in a field area;
– This has traditional Mario and Luigi gameplay;
– Control Mario with A;
– Control Luigi with B;
– Control Paper Mario with Y;
– E3 demo has players going through a small field on the lookout for these missing Toads;
– 3 of the Toads eventually pop out disguised as a wooden gate to shield themselves from Bowser;
– You then learn a dash move to help catch a Toad running around rapidly;
– The final Toad is located through a hidden pathway;
– Use Paper Mario to slide past some rocks to find the last Toad;
– Paper Mario’s abilities open up how puzzles are solved;
– Boss mode also included;
– In the demo, a magikoopa sets you on Petey Pirhana;
– Use cards during battle;
– Collect stars each time you hit an attack successfully that lets you spend points on cards that helped the gang in a number of ways;
– Use cards to do things like increase defense for a few turns;
– At one point in the battle, Petey Pirhana chases Mario and Luigi;
– Paper Mario saves the day by turning into a paper airplane that helps lift the brothers as Petey flung mud balls at them;
– Once stopped, Paper Mario returned to his current form and smashed him for more damage;
– Different set of battle commands for Paper Mario than Mario and Luigi;
– Mairo and Luigi have then traditional moves like jump and hammer;
– Paper Mario has copies;
– Copies disappear as Paper Mario is hit;
– The more copies he has, the more damage he can dish out with his jumping attack;
– Papercraft Mode: Mario, Luigi and Paper Mario control a paper mecha that is moved around to attack giant, paper-shaped Goombas on the field;
– To charge up the mecha’s power, there are pads strewn about that initiate a rhythm-based game where you press Y each time a wave reached the end of the circle;
– The better you’re at it, the quicker the meter will charge;
– Once charged, you can wipe out the Goombas by charging at them with the B button;
– Once the enemy is down, the Mario mecha can spring out of its pad and unleash a devastating pounce that often destroys the enemy;
– Mecha King Goomba is the boss of this mode;
– When you dodge from him, Goomba leaves open an opportunity to attack;

Also, here’s the trailer and some artwork: