NOTE: This post will be updated during the day as new info comes in.

You may want to read these interviews with Kensuke Tanabe about the game and the future of the Prime series, before judging this title…

Here’s some gameplay footage of Blast Ball from GameXplain and IGN:

Below you can find some details on both game modes, the Facts Sheet, the Trailer and some Screenshots.

– 4-player co-op first-person shooter;
– Takes place in the Metroid Prime universe;
– Local and online multiplayer available;
– 4-player squads are needed to complete different kinds of missions;
– Different mission objectives, for example, trying to capture certain kinds of creatures;
– Before going into a mission, you’ll sit through a briefing;
– As part of your mission preparations involves selectong different kinds of items and weapons to take into combat;
– These include Repair Capsules, Shield Generators, Missiles and Slow Beams, among others;
– Items/weapons have different purposes;
– Depending on what kind of weapons you carry, it will change your role in the party;
– You’ll then hop into a mech and tackle your mission;
– Aiming is done with the 3DS’ gyroscope;
– Blast Ball comes in addition to co-op;
– Blast Ball is a 3-on-3 sci-fi “sport” mode;
– In Blast Ball, players shoot a ball into the opponent’s goal to score;
– Throughout the match, players can gain a competitive edge by collecting and using a variety of individual power-ups, such as barriers, power-ups that speed you up or that let you eject opponents out of their mechs;
– Blast Ball matches end after a team scores 3 goals;
– Blast Ball supports 3DS Download Play;
– The game releases sometime next year;
– The music is being done by in-house Next Level folks along with Kenji Yamamoto from Nintendo’s SPD group.

– Blast Ball is a part of Metroid Prime: Federation Force;
– Teams are made up of 3 members;
– You play in Metroid-style mechs, with a first-person perspective and a massive arm-mounted cannon as a weapon;
– You have to try to knock an enormous, electrified orb into the opposing team’s goal, much like a first-person soccer, trying to keep the ball at bay with your blaster rather than your foot;
– If you’re hit with the ball, your suit takes damage, and taking too much will eject you from your mech, meaning you will need to wait and respawn;
– You can also take damage from enemy fire;
– Circle Pad: movement, B button: jump, A button: fire your cannon;
– Fire the cannon in rapid bursts with quick presses or a charged shot if the button is held down;
– Hold down “R” to strafe with the Circle Pad or fine-tune your aim with the gyroscope;
– L button: let’s you lock onto the ball, keeping it front and center in your visor’s Prime-style display;
– While locked on to the ball, your mech’s lateral movement is much slower than you’d expect;
– HUD cracks when you take too much damage;
– Smooth frame rate; 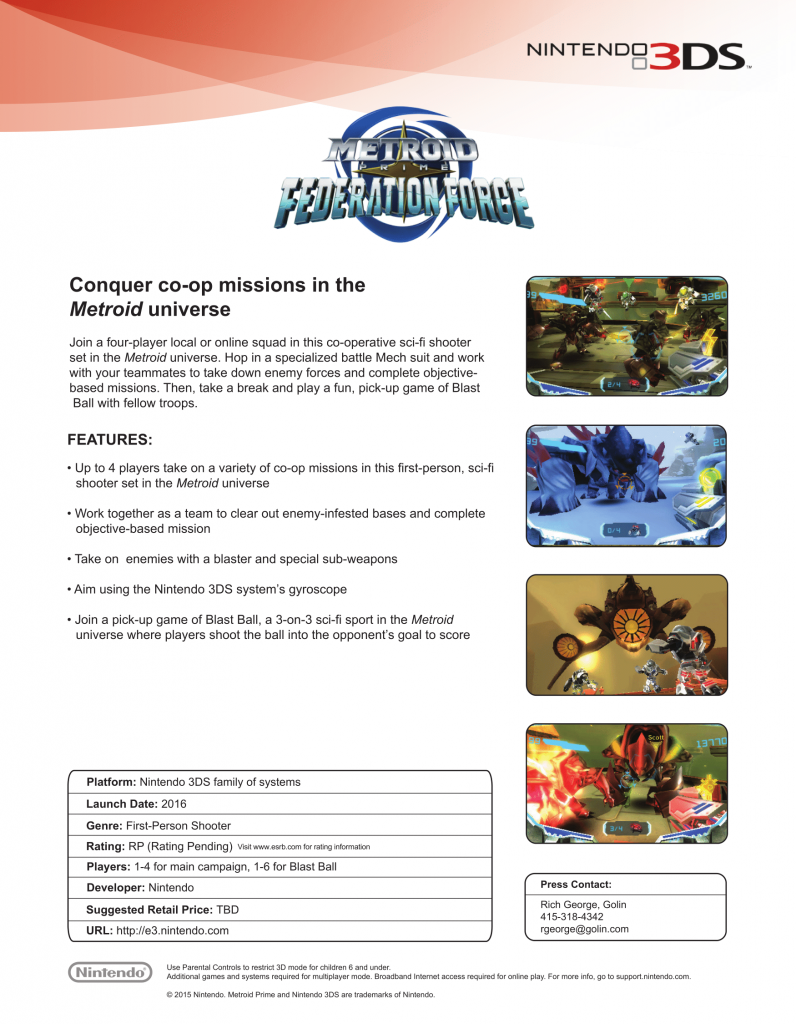 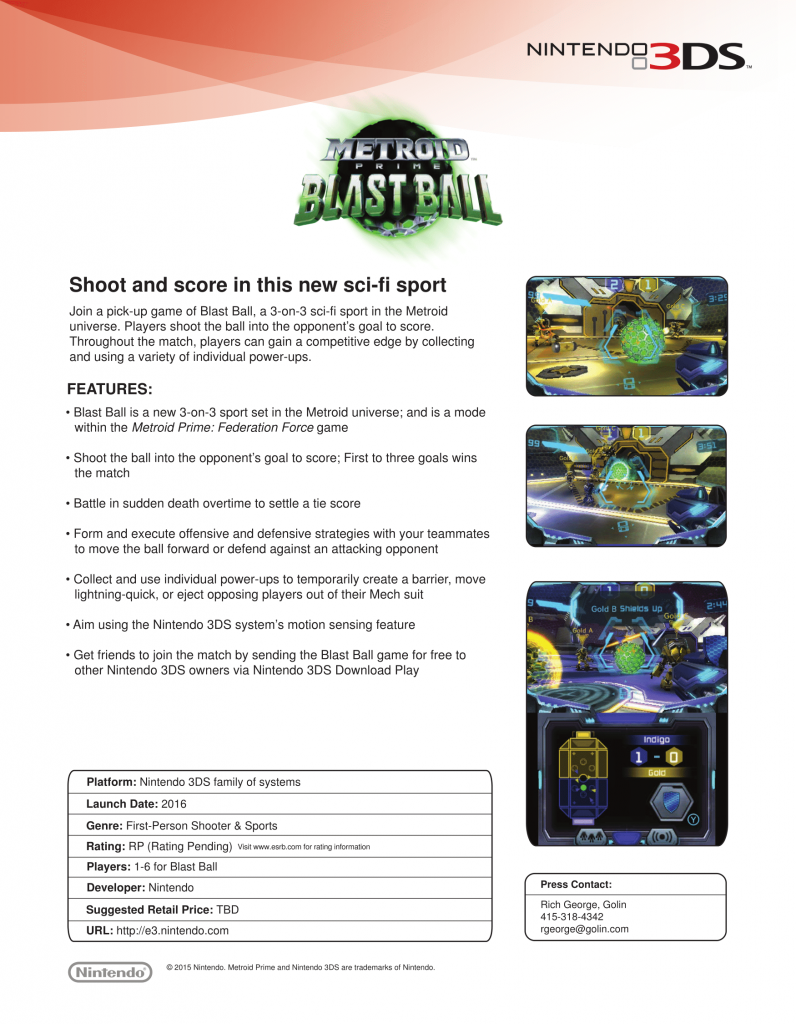 And here’s the trailer and screenshot gallery: