First, we have the recently announced Harvest Moon: Seeds of Memories.

Moreover, the 3DS eShop games Gotcha Racing and Brave Tank Hero, along with Ninja Strike, will be on display at the showfloor.

Natsume will also be talking about the GBA games they are bringing to the Wii U Virtual Console. These include Medabots and Pocky & Rocky With Becky, among others.

Those attending E3 will be able to partake in Natsume’s annual Bust-a-Move 4 Tournament. More details about this will be shared soon, including how to enter on each day. Prizes will be handed out to winners, including premium plushies and Harvest Moon headphones, like the ones below. 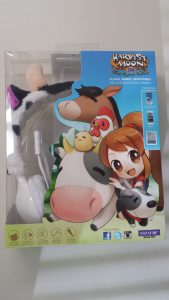 In addition, the company announced today that the aforementioned “Ninja Strike” is in development for the Wii U.

Run, fly, and slash enemies to get the stolen treasures back! Be sure to check out this high-speed, action-packed, side-scrolling title in Natsume’s Ninja series! Whether you go with strength or triple jumping, there is a ninja for you! Choose from 5 different ninjas, each with their own special characteristics. You’ll face much more than just run-of-the-mill henchmen! Use your hard-earned coins to level up a variety of skills that will help you get further and make you tougher! Pick the skills that best fit your playing style! How far can you go?

Like mentioned above, Ninja Strike will be one of the featured titles at this year’s E3.