Here are two infographics released by Nintendo with the software lineups for 3DS and Wii U: 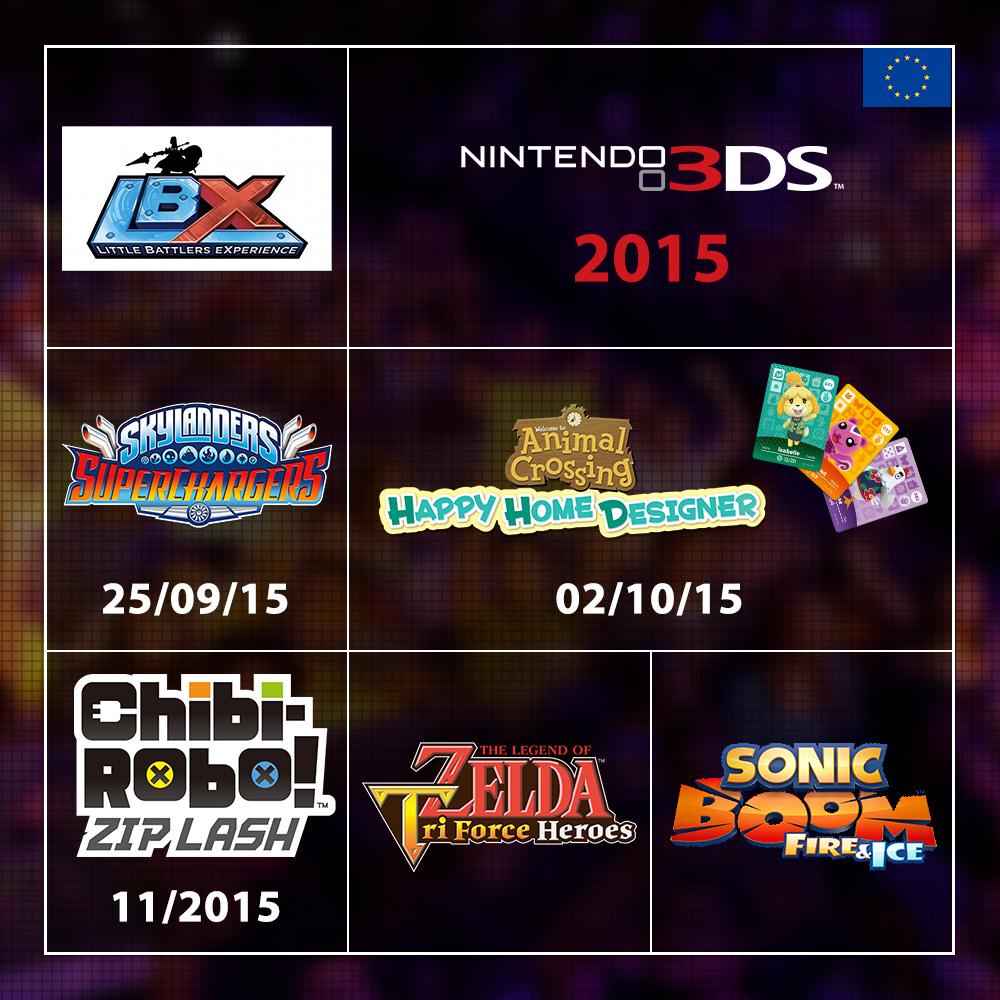 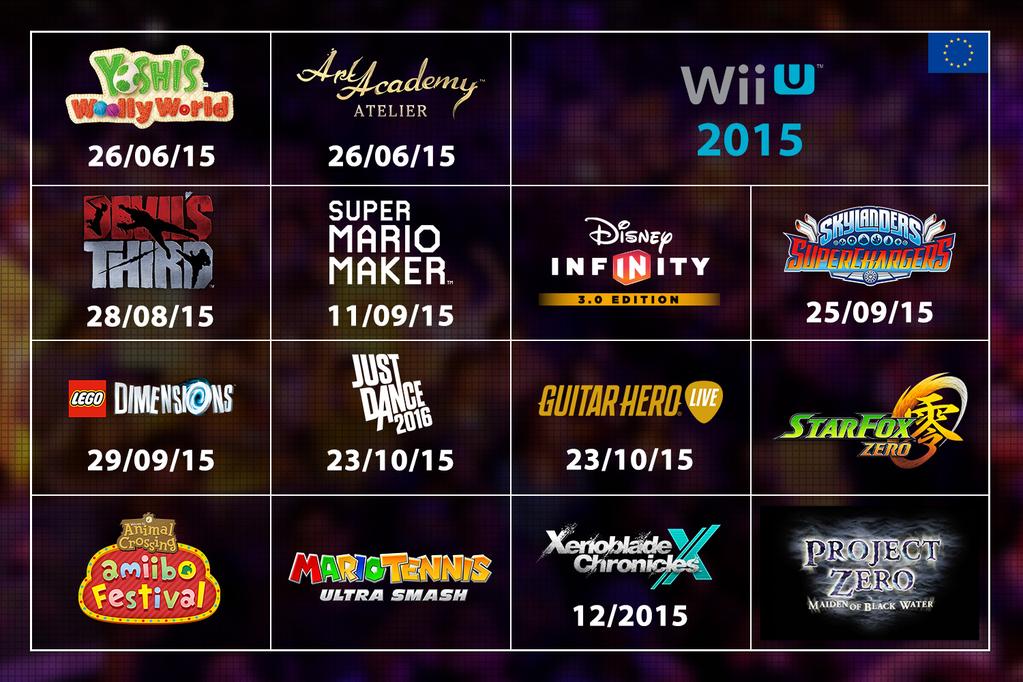 The Nintendo Digital Event is now over.

If you missed it, you can watch the full presentation below. I also added Nintendo’s Recap of the games that were shown at the event or are coming soon.

You can also watch Nintendo Treehouse Live in the following days right here.

LOS ANGELES–(BUSINESS WIRE)– This year Mario reaches an impressive milestone in video gaming: 30 years as a leading man in Nintendo’s timeless Super Mario Bros. series. At E3, Nintendo celebrates Mario’s longevity with a new installment in the franchise called Super Mario Maker, one of many games at the show that transforms familiar characters and their games with unique new looks, styles and game-play features. Players will see new installments of beloved franchises like Star Fox, Yoshi, Animal Crossing, Mario & Luigi, Xenoblade and Metroid, and enjoy the reimagining of Bowser and Donkey Kong as Skylanders figures that also have amiibo functionality with compatible Nintendo games.

“Millions of video game players worldwide look to Nintendo to deliver surprises and smiles,” said Nintendo of America President and COO Reggie Fils-Aime. “That’s what we have on display at E3 – familiar characters and franchises transformed in unexpected ways that can only be found on Nintendo systems.”

Here’s a roundup of some of the news and games Nintendo is showing this week:

Wii U Games and Other News

The Legend of Zelda: Tri Force Heroes: Three players take on the role of individual Link characters and team up to solve puzzles and battle bosses in dungeons. The game features the same top-down view and visual style of The Legend of Zelda: A Link Between Worlds. Players must work together, as the group shares all hearts. All three Links can stack on top of one another to create a Totem to reach new locations and solve puzzles or fight enemies. Different outfits offer unique abilities. The game is scheduled to launch this fall.
Pokémon Super Mystery Dungeon: The player transforms into one of 20 Pokémon as he or she sets out on an adventure in a world inhabited solely by the 720 discovered Pokémon, including Legendary and Mythical Pokémon. This game boasts hours of replay-ability by randomly generating each dungeon, so players will never explore the same dungeon twice as they unravel this tale of adventure and mystery. The game is scheduled to launch during the 2015 holiday season.
Animal Crossing: Happy Home Designer: One of the favorite activities in the Animal Crossing series now gets a full game. With more options than ever, players design interiors and exteriors of homes for hundreds of animal characters, and can even design a garden. They can choose where to place the home, and then pick out a house style and colors for the roof, door and fence before getting to work on the interior. Tapping compatible amiibo character cards brings favorite Animal Crossing characters with their separate personalities and design requests into the game, which launches with a complimentary amiibo card on Sept. 25. A bundle will launch the same day and include the game, one amiibo card and the NFC Reader/Writer accessory.
YO-KAI WATCH: This game sold millions and became a cultural phenomenon in Japan. Now U.S. players get to experience the fun of hundreds of sometimes cute, sometimes spooky, and usually mischievous Yo-kai that inhabit our world. Players explore using their Yo-kai Watch to find Yo-kai, then befriend them and turn them into a team to battle other Yo-kai. The game is scheduled to launch during the 2015 holiday season.
Fire Emblem Fates: Two versions of the franchise’s new installment offer players an unprecedented choice: fight an opposing force or join the other side and try to make changes from within. For the first time in the series, players take on the role of the main character and command an army, while struggling to decide which path to follow: helping blood relatives or the family that raised him or her. The game is scheduled to launch in 2016.
Mario & Luigi: Paper Jam: Paper Mario jumps out of the book and into the bizarre adventures of Mario & Luigi, resulting in hilarious and dangerous hijinks. Become the superstar team of Mario, Luigi and Paper Mario to take on quests, take down enemies and untangle these two unique universes in this playful new entry in the Mario & Luigi series. The game is scheduled to launch in spring 2016.
Hyrule Warriors Legends: The Wii U version of Hyrule Warriors comes to the Nintendo 3DS family of systems. In the portable version, experience new story elements and playable characters inspired by The Legend of Zelda: The Wind Waker. New features allow players to enhance their tactics and switch between different characters on the fly as they explore and battle in Hyrule’s most famous locales. The game is scheduled to launch in Q1 of 2016.
Metroid Prime: Federation Force: Up to four players can connect online or locally to take on co-op missions in this first-person sci-fi adventure set in the Metroid Prime universe. Players don a mech suit and work together as a team to clear out enemy-infested bases and complete objective-based missions. After completing the missions, up to six players can compete in Metroid Prime: Blast Ball, a three-on-three game that requires players to shoot a ball into their opponents’ goal. The game is scheduled to launch in 2016.
Additionally, select Nindie developers will feature exclusive content and reveals on Nintendo Treehouse: Live throughout the week of E3. Titles include Runbow (13AM Games), FAST Racing Neo (Shin’en) and Typoman (Headup Games and Brainseed Factory) for Wii U, SteamWorld Heist (Image & Form) for Nintendo 3DS, and Mutant Mudds Super Challenge (Renegade Kid) for both Wii U and Nintendo 3DS.

For details about these games, the Nintendo Treehouse: Live programming and other Nintendo activities during E3 2015, visit http://e3.nintendo.com.

As a treat for fans watching all the E3 action from home, the Nintendo eShop is hosting its biggest sale of the year for both Wii U and Nintendo 3DS games. Players can get up to 30 percent off select games related to some of the top franchises featured at the show, including Super Mario Bros., The Legend of Zelda and Yoshi. The sale runs now through June 23 at 8:59 a.m. PT. For full details, check http://e3.nintendo.com/offers.

Finally, here’s a Release Date Infographic with all the upcoming titles: