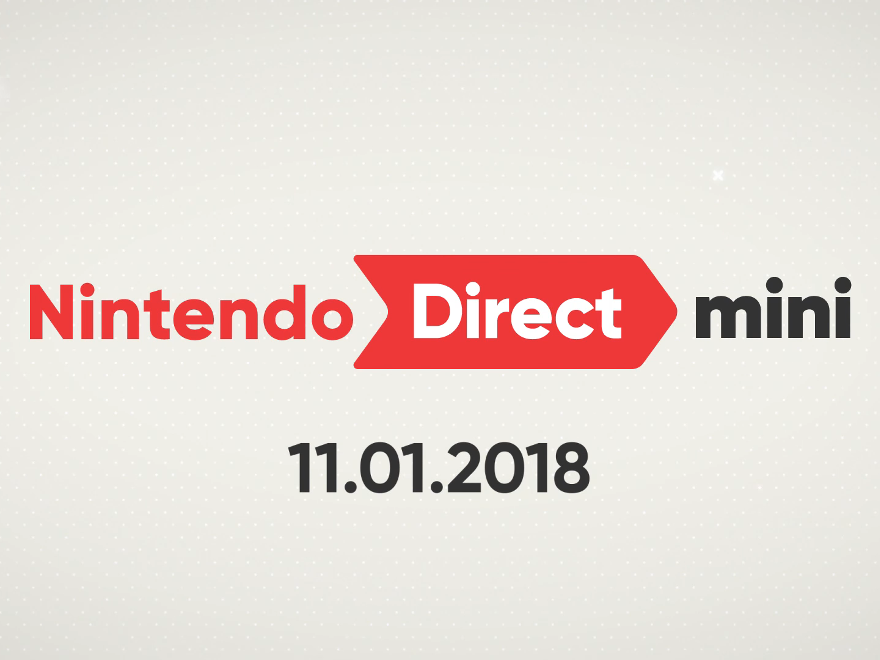 Nintendo released a new Nintendo Direct Mini on January 11th, 2018 detailing new titles that will soon be released on Nintendo Switch. You can find a roundup of all that was announced in all three versions of the Direct below, with Japanese exclusive announcements towards the end.

– Brings the original Nintendo DS classic to Nintendo Switch.
– Can be played with traditional touch controls or the new Joy-Con controller style.
– Features a sizeable new epilogue scenario that delves right into the heart of the story.

– A free demo is now available on the Nintendo Switch eShop.

– Introduces new Copy Abilities such as the Artist and Spider abilities.
– Combine abilities to create new Friend Abilities such as Zap Yo-Yo, Icicle Lance, Friend Throw, and more.
– 4 Player Co-op opens even more possibilities such as Friend Train or Star Train.
– Features fan favorite bosses like Meta Knight and new ones like Francisca, the Frozen General.
– The story revolves around an unknown deep space threat that Kirby and friends must save Dream Land from.

– Contains all the content from previous versions of the game, including DLC.
– Features full 1080p HD graphics in TV mode and 2 Player Multiplayer in a single system by sharing Joy-Con controllers.
– Link and Zelda receive new outfits based on their appearance in Breath of the Wild.

– New mechanics will challenge players’ ability to read an opponents position and stroke to determine which shot will give them the advantage.
– Features a new Story Mode with missions, boss battles, and more. This is the first time the mode has been featured since the Game Boy Advance title Mario Tennis: Power Tour.

– Join Adol and Dana in their adventure to survive a deserted island and change the course of history.
– Gather shipwreck survivors and build a base as the game progresses.
– Fight monsters in high speed battles by alternating between characters with different attack types, such as slash, strike, and pierce, to better suit your foe’s weaknesses, until you can unleash powerful special moves.

– After completing the story a new online activity will become available, Luigi’s Balloon World.
– This activity features two modes: Hide It, where you have 30 seconds to hide a balloon, and Find It, where you have 30 seconds to find balloons that have been hidden by other players around the world. By knowing each world’s terrain well, you can better hide and find balloons, allowing you to climb the rankings faster.
– The update will also feature new outfits for Mario (Sunshine Shades & Outfit, Musician Hat & Outfit, Knight Helmet & Armor) and new filters for Snapshot Mode.

– Features 2-on-2 tag team battles between fan favorite SNK heroines.
– Activate a variety of moves with just one button and get the upper hand by using various items while changing characters.
– Allows you to customize your fighters with different outfits and accessories.

– Features Yuri Sakazaki, one of the heroines present in the title above.

– Work together with up to three friends who own the Switch version, locally or online through CRIME.NET.
– Has touch screen menu navigation and HD rumble.
– A new heister, the Japanese computer whiz, Joy, will premier as a timed exclusive in the Switch version. She owns a changing LED mask, her own weapons and hacker perks, allowing her to break through any firewall.

– Climb, glide and dig your way through a dark Nordic forest and explore its living, breathing ecosystem filled with secrets, side quests and mystical creatures.
– Experience the tactile, analogue song mechanic that allows you to communicate and speak to every living thing in the forest, through the use of the Joy-Con controls and HD rumble.
– Learn a diverse array of animal cries that allow you to befriend or manipulate creatures and plants.

– Journey across the many dangerous environments of Celeste mountain, explore strange places and meet peculiar characters as Madeline, by using her mid-air dash. She can climb any place as long as her stamina lasts.
– Assist Mode lets you tweak the difficulty to a slower pace or full on invincibility.
– If you really want to white-knuckle it though, you can take on the challenging B-Side chapters.

– Improved version of the Wii U game.
– Features Funky Kong as a playable character in a whole new mode. He can double jump, hover, perform infinite rolls and underwater corkscrews, and thanks to his sturdy surfboard even spikes can’t slow him down.
– A new 2 Player Co-op Mode has also been added.

– Includes the main game plus the Artorias of the Abyss DLC.

– No new information was announced outside of the Japanese release date.

If you would like to discuss any of this with me or other Nintendokusou readers hit up the comments section, Twitter, or our new Discord Server.