Pokémon Sun & Moon released in Europe during the week, so a new launch trailer and commercial have been released. You can find them below.

Ohmori and Masuda talked about various aspects and mechanics of the game, including the challenge of implementing Z-Moves, getting the most out of the 3DS hardware, and new Pokémon and features introduced this time around. You can find an English translation of this interview over here, thanks to Nintendo Everything.

When it comes to sales, Media Create has reported that Pokémon Sun and Pokémon Moon have sold 1.591 million copies in its first three days available in Japan. The sales tracker also revealed that Sun sold 808,000 copies by then, while Moon was at 783,000 units.

If you count the Double Pack which also sold 151,000 units (containing two games in each), the overall total is 1.893 million, putting Pokémon Sun & Moon at the same scale as X & Y, which in turn sold 1.867 million in the first week without a Double Pack option. Both have relatively the same sell-through rate of about 80%.

However, the number of pre-orders for Sun & Moon, which sits at 1.406 million (including the Double Pack) is a bit lacking when compared to X & Y’s 1.740 million. Pokémon GO’s release did help attract attention to the Pokémon series again, but it’s surmised that its impact had a limited effect on boosting reservation numbers.

Meanwhile, according to Famitsu, Sun and Moon’s first week sales are second behind X & Y’s 2.096 million. 3DS hardware sold 114,000 units, almost four times as much compared to the previous week’s amount of 30,000 units.

In North America, GameStop shared that Pokémon Sun & Moon are the retailer’s best-performing games of 2016, with pre-orders at the highest ever for any title at GameStop in five years.

When taking all of this into account, the Nintendo 3DS has reached a new and pretty important milestone in Japan, where 3DS software sales now top 100 million. According to Famitsu, the 3DS is the third platform to reach that number in the last 20 years, after the Nintendo DS and the PlayStation 2.

Finally, you can take a look at the latest episode of Nintendo Minute below, for another Pokémon Sun & Moon focused episode, this time covering Battle Royale.

The Pokémon Company and Niantic have now officially announced that Ditto can be caught in Pokémon GO. However, it can be disguised as any other pokémon when you find it. Check out the announcement trailer below.

Niantic has also been tweaking a few features in the game.

First, we have a few adjusments to the Nearby and Sightings feature, which you can learn more about in Niantic’s message below.

We will be expanding the ability for Trainers to test this updated version of the features and provide us with feedback. Starting today, Trainers in the following areas will now be able to use the new Nearby and Sightings functionality:

United States of America: All states west of the Mississippi River (except Hawaii and Alaska)

Canada: British Columbia, Alberta, Saskatchewan, Manitoba, and the western half of Ontario.

Australia: All states and territories

Your feedback submitted to all of our official social media accounts and posted in other channels is important to us. We will continue to review community feedback and make changes if necessary.

Our first six months has been nothing short of exciting and your continued support has been inspiring. We have a lot of content, features, and functionality that we will be implementing over the coming months and years. Our goal is to to always improve on existing features where we can while also releasing exciting new content and functionality.

Moreover, Niantic has made adjustments to the CP (Combat Power) of Pokémon in the game, including Alakazam, Rhydon, and Gengar, which will receive a boosted CP, while others will be lowered.

Niantic says that the changes “will allow a more balanced and competitive battling and training experience in Gyms”, and that the company “will continue to adjust the CP going forward to improve the game balance when necessary”.

Finally, until November 30 Pokémon GO players will be given the opportunity to earn double the amount of XP and Stardust, by completing an in-game action during this period, which makes them eligible for the bonus.

Here’s Niantic’s take on the promotion:

“It has been an incredible experience since we launched Pokémon GO a few short months ago in July. We are passionate about creating experiences that encourage exploration and promote exercise. We are humbled that hundreds of millions of you around the world have joined us on this journey. So we would like to say thank you – and what better way to say thank you than to celebrate our community.

So, starting November 23rd at 00:00 UTC and going through November 30th 00:00 UTC, we will double the amount of XP and Stardust you receive when completing in-game actions.”

Episode 14 of Pokémon Generations is now available on the official Pokémon YouTube channel. You can watch it below.

A small new patch is now available in Japan for Animal Crossing: New Leaf – Welcome Amiibo, bringing the game up to version 1.5.

The patch is not up in either North America and Europe, and it merely addresses an issue in the Japanese version of the game, with error [004 – 6006], which happened when players downloaded presents/campers. Nintendo says that there are also additional enhancements to improve the user experience.

Meanwhile, now that the game is available in Europe, Nintendo has released an overview trailer, covering the newly added features. You can find it below.

In it, the two developers talked about the Animal Crossing series as a whole, covering topics such as if they anticipated Animal Crossing becoming so popular, their approach to making games, and what they aim for when creating new titles, among other things.

You can read the interview in question over here.

Nintendo has once again updated the Japanese Kirby: Planet Robobot website with more concept artwork of certain physical mechanisms. You can find those in the gallery below.

It also contains some new details about the soundtrack. Apparently, after initially hearing the Haltmann Works Company theme, director Shinya Kumazaki gave an order to composer Hirokazu Ando to “add more weight to make it feel like an evil giant corporation”, so he made a new version of the theme. However, it might have ended up feeling a bit too “heavy” when it was redone. From there, Ando received feedback to “make it feel more like an unknown invader”, which resulted in the final version.

When it comes to the Decisive Battle Against Machines track, Andou initially created a piece with the theme of “a being that exceeds human wisdom by wandering around galaxies”. For the next version, the latter part was made exciting to have a feel of “a decisive battle with a countdown timer”. Then Andou was given feedback to make it “even more exciting, and after it calmed down to oblivion, revive it with a loop at the end!”, and it was improved even more.

Moreover, the voices of animals heard during the Decisive Battle Against Machines were recorded from actual pets raised by HAL Laboratory. They have a cat named Tom and a chicken named Nago-chan.

You can listen to these music tracks on the Kirby: Planet Robobot site over here.

The North American Super Mario Maker website is now available, and you can access it over here.

Nintendo also shared a few more commercials for the game, both in North America and Japan, which you can find below.

Finally, both versions of Super Mario Maker have now received a new costume and Event Course, where players can unlock a Mystery Mushroom costume based on the Undodog after completing the “Walkin’ with Undodog” level.

Here’s an overview of the course:

“Mary O. was too busy to take Undodog for his usual walk today, so he decided to head out all by himself! He didn’t make it far before he came across a strange green pipe. Well, curiosity never hurt a dog, so he jumped right in! Now Undodog finds himself stranded in an unfamiliar land… Can you help him find his way back home?” 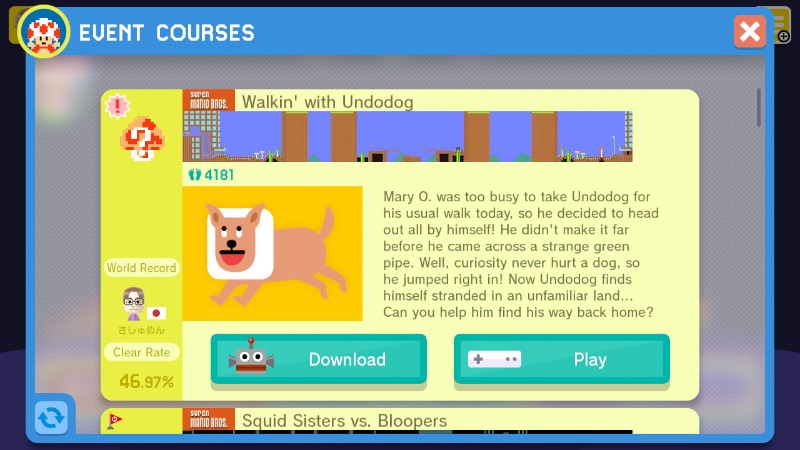 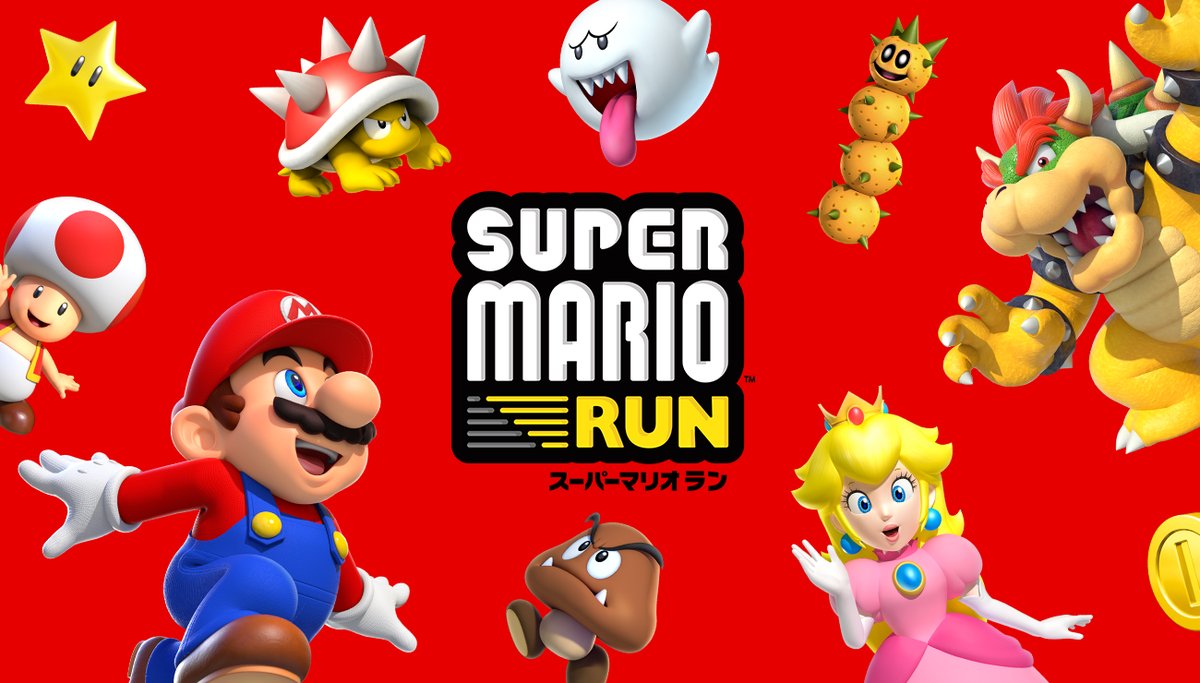 Nintendo has shared another batch of Super Mario Run artwork. Check it out in the gallery below.

Nintendo has announced that the Miitopia preview available on the Japanese 3DS eShop will be receiving an update this upcoming Wednesday. With this, Nintendo will be including new features, such as a new adventure movie, a costume change feature, and “Everyone’s Mii” functionality. Moreover, it’s mentioned that Miitopia’s built-in Mii studio is capable of using 32 colors, unlike the regular Mii Studio which is limited to eight.

“Everyone’s Mii” is a feature that lets players use popular Miis created by others. When starting the game, a questionnaire appears to determine popularity.

Finally, Miitopia’s website has been updated with the confirmation of a few new jobs. These include the Cat, Devil, Scientist, Tank, Princess, and Flower jobs.

Below you can find some gameplay footage of these jobs, followed by a new commercial recently released in Japan.

Nintendo has once again updated Miitomo with another batch of new and returning Miitomo Drop and Shop items. In addition to the returning items listed below, note that the Metroid collaboration items will also be around again until December 7.

The decisive battle! The Battle of Miitomo #2

The decisive battle! The Battle of Miitomo #3 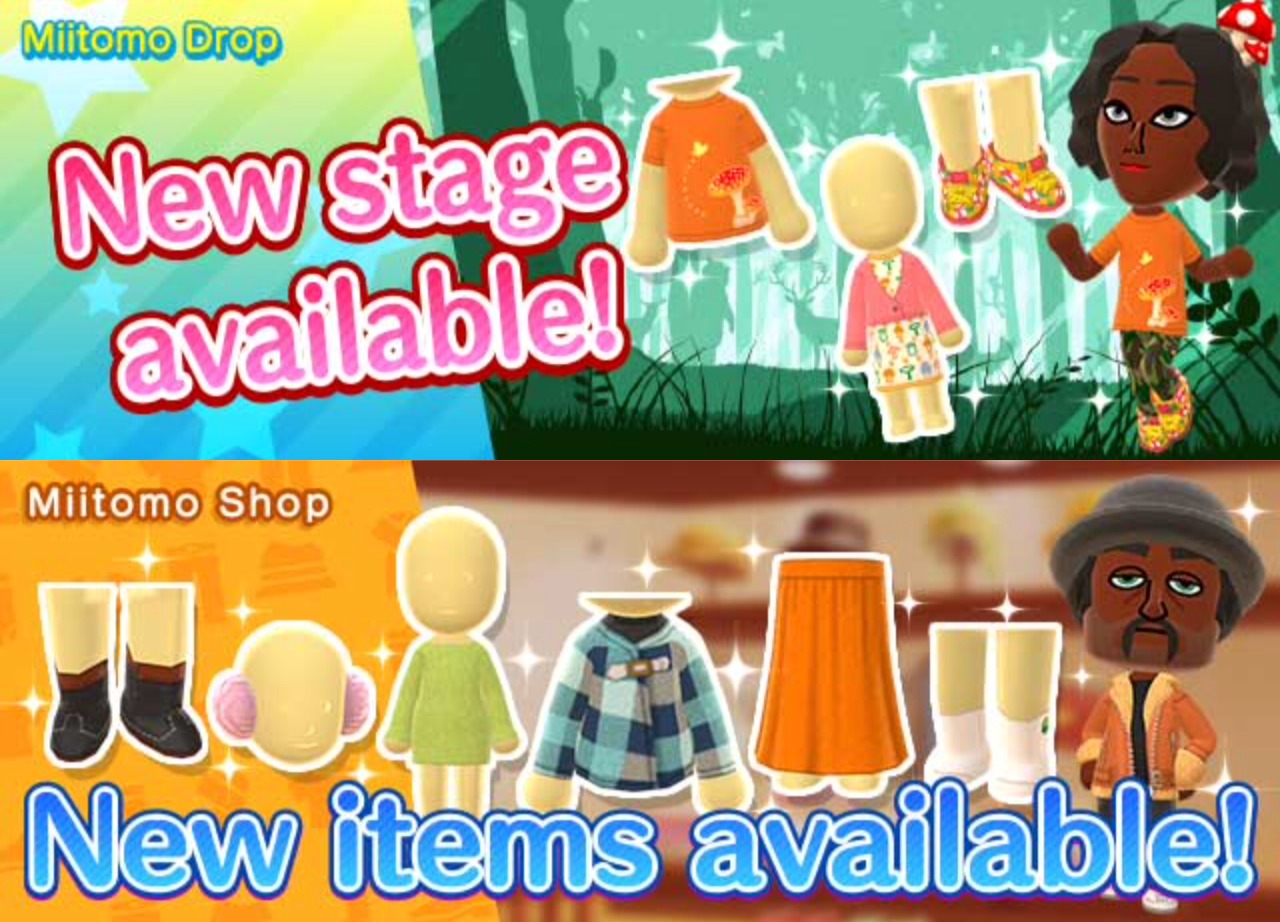 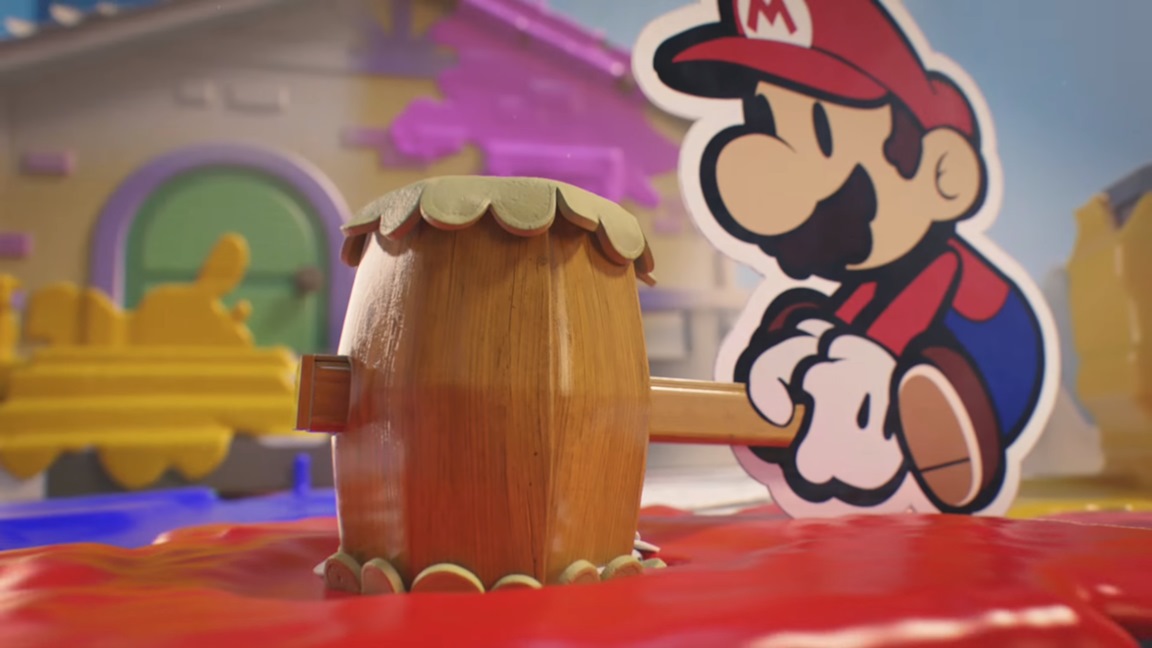 Data for other 3DS titles is also available. Yo-kai Watch 2, which shipped in September, has sold under 50,000 units. Dragon Quest VII, which also debuted last month unfortunately appears to have sold unfavorably, since it was outsold by the likes of Pokémon X & Y, Smash Bros., and even Pokkén Tournament at retail, all games that have been in stores for quite some time now.

Special thanks to @AstronautClaire for all the info. 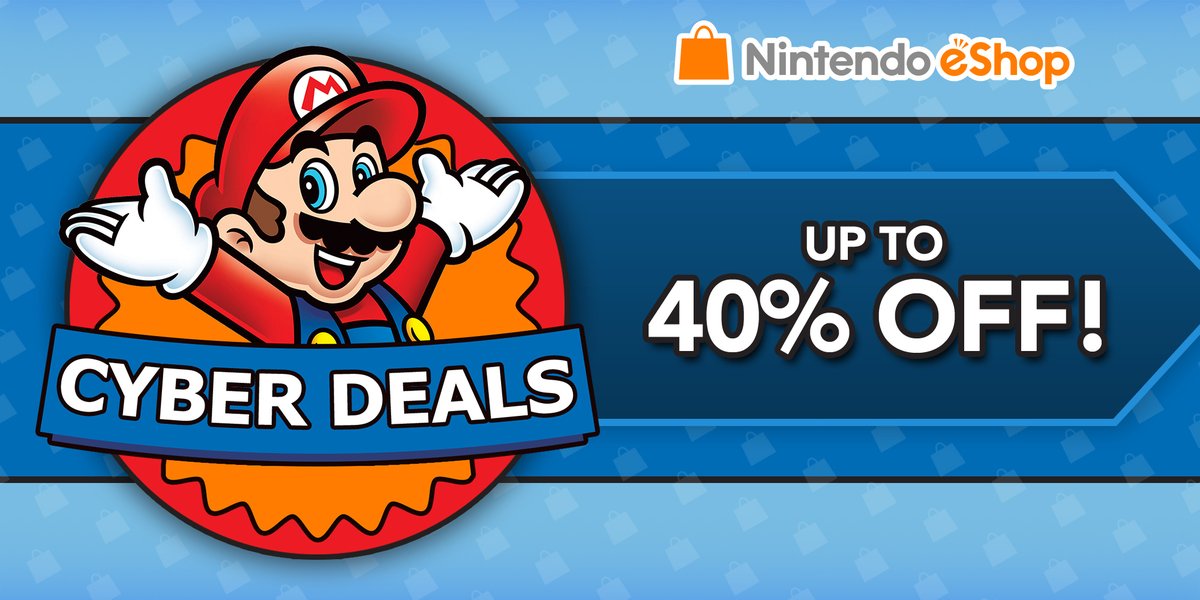 Nintendo recently announced a new Cyber Deals promotion, which is now live on the Wii U and 3DS eShops in both North America and Europe.In North America it will last until December 5, and in Europe until November 28.

You can find the full lineup of titles with discounts for both regions below.