13AM Games is promoting a special indie sale on the Wii U and 3DS eShops. If you’ve already purchased Runbow or plan on buying the game soon, you can save 30 percent on select Wii U and 3DS titles until 8:59 a.m. PT on October 22.

The full list of games discounted in the sale includes:

Here’s a trailer that was released to promote the sale: 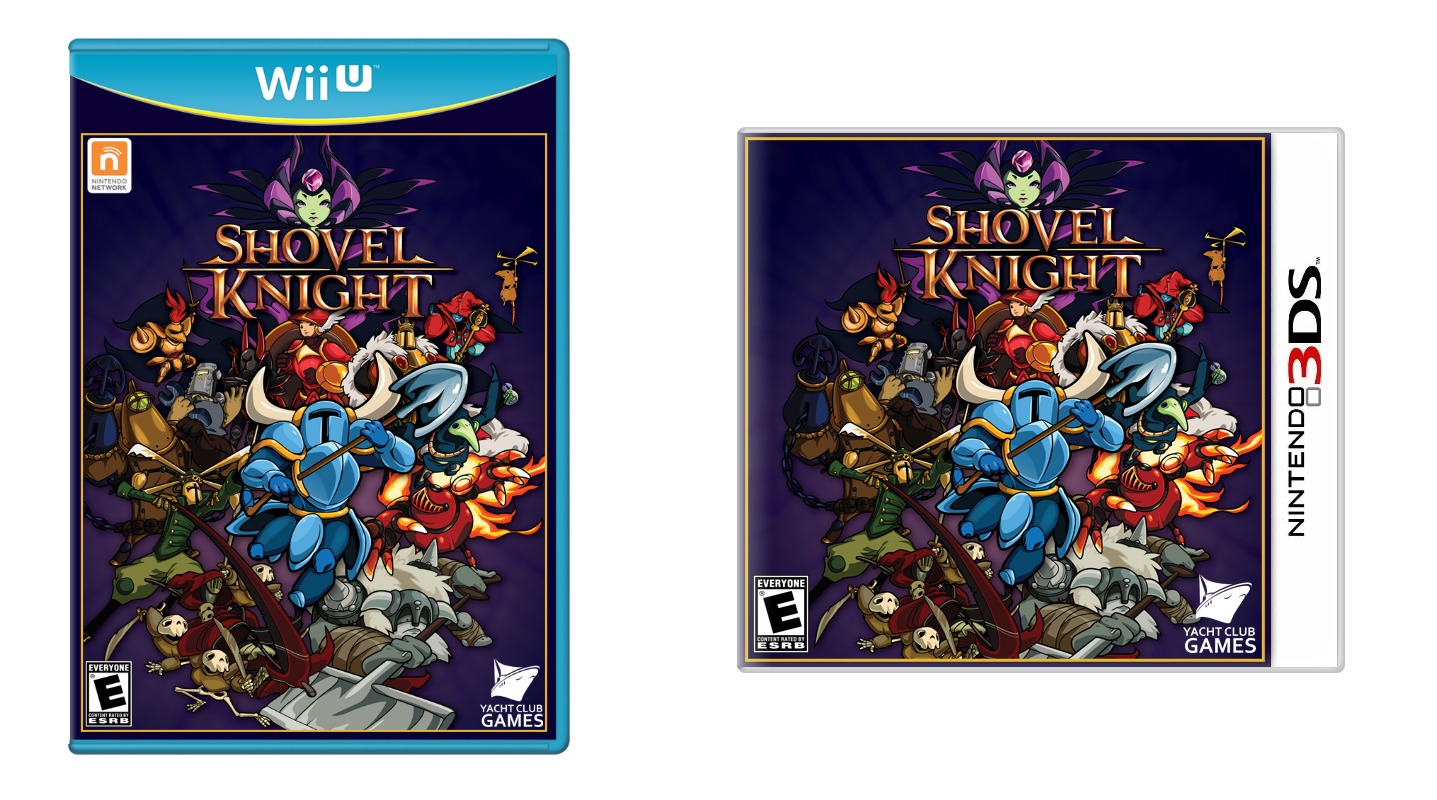 According to them, the release of the game’s physical version has now officially moved to November 3 in North America and October 30 in Europe. Yacht Club Games also explained the slight delay and price increase, as you can see below:

The final few steps of the Plague of Shadows content took a little longer than expected, but it was important to us that this update to be on the disc/cart right out of the box! Unfortunately that meant we had to push back the date just a little a bit. Luckily, all of the teams throughout the various console manufacturing steps have been really helpful in reducing this knock-on delay as much as possible.

In an unexpected turn of events, we’ve had to raise the price of our game to $24.99. Although everyone initially agreed to a $19.99 price point, some retailers ran into trouble with limited space to show off their wares, and the rules in place about where games with certain prices are displayed. We didn’t want our ‘bargain priced’ game to go straight to the bargain bin of obscurity, so we had to raise the price.

However, we didn’t want anyone to feel as if they were getting hoodwinked just because of our retail situation! If you have already pre-ordered Shovel Knight, your retailer should honor the original price!

We’ve been working hard every day to ensure the physical version is a welcome addition to your game library. From box cover to disc to full color instruction manual. Lastly, to make the package even more compelling at its new price, we’ve added even more!

All versions of the physical release will now come with a free soundtrack download. We know this is a bit redundant, as the soundtrack is ‘pay what you want’ online, but this provides a guilt free way to formally obtain the full, high-quality version of the soundtrack for free! Hopefully, it also gets Jake Kaufman’s beautiful soundtrack into more people’s hands for those people who are unaware of Bandcamp!

For all those wondering about all things Shovel Knight amiibo, we hope to have more updates soon. We’re still pinning down a final release date. As soon as we know, you’ll know! Many have asked for us to open up preorders in North America — and so do know that we are considering it. Hopefully when we announce the release date we’ll have more info on that front!

Alright, that’s all we’ve got for today. Let us know if you have any questions about what’s happening at retail! Hope everyone is enjoying the Plague of Shadows content!

You can find a new trailer and some gameplay footage below:

Corecell’s shooter game, Wicked Monsters Blast! HD Plus, is scheduled for release in the European Wii U eShop on October 15 with pricing set at €7.99.

Below you can find a new trailer for the game:

Wobbly Tooth is bringing out its new game, The Magic Hammer, to the 3DS eShop on October 15 for $5.99. The European release will come as soon as the game gets rated, according to the creators.

The Magic Hammer is an open-world co-op action RPG, where players can create an avatar character and explore different worlds, battle enemies, mine, build and play with others locally or online.

You can find a gameplay trailer for the game below:

After a long wait, SmileBASIC is finally coming to North America, since Nintendo’s website now has the app listed for release on October 15 with pricing set at $9.99.

Below you can find an overview of the different features included in this programming tool and a few screenshots:

A Range of Versatile Instructions:

Pictures and words that “pop out” from the screen!
Information obtained from various different sensors
Voice input and playback via the microphone
Versus play using local wireless communication
Draw instructions for lines and circles, filling, and more
Music composition using MML

Yet another game releasing on October 15 in the European Wii U eShop, is Old Skull Games’ Rakoo & Friends. You can find some footage from the game in the video below:

Another upcoming game for the Wii U that we got footage for this week, is Still Games’ Animal Gods. Give it a look in the gameplay videos below:

The Dance of the Damned

After a long time without news, Nexis Games has released some new screenshots of their upcoming multiplayer title for the Wii U eShop, The Dance of the Damned.

In case you never heard of it, here’s an overview of the game before you take a look at the screenshot gallery:

The Dance of the Damned is a tale based on love, betrayal and vengeance that takes place during the mid-evil times. Players will embark on this epic journey as Ayamei Shimata a seemingly ordinary young girl that soon becomes known throughout the land as The Dragon Princess. The story begins on a warm summer night during Ayamei’s childhood, a night that started no different from any other but was soon to be one she would never forget.

Choice Provisions, Fishing Cactus and Moragami are teaming up to bring Shift DX to the 3DS.

Shift DX is a follow up to Shift 1 and 2, a pair of classic puzzle-platforming games. The new title for the 3DS, will feature levels from both versions along with 100 new ones. On top of that, it will feature a new Shift Challenge gameplay mode, a level editor with shareable QR codes, “Pop-Art” and “Classic” visual modes, and unlockable playable avatars from various indie games.

Shift DX is coming soon to the 3DS, in both physical and digital form. Read on below for a full overview of the game and then check out the gallery for some screenshots:

Shift DX marks the return of the classic Shift series. The game will feature all of the levels contained in Shift 1 and 2, along with 100 all-new levels designed specially for this release.

Many have tried to emulate the gameplay of Shift since its first release in 2008, but none have managed to capture the frantic, mind-bending nature of the series. Players are tasked with making their way through a series of perplexing rooms, equipped with nothing more than their ability to “shift” the playing field. Is a wall blocking you from progressing? Flip that level upside down and turn that wall into a pit!

Of course, that’s only the beginning of the challenges players will encounter in Shift DX. The road to victory is paved with mysterious items, complex environmental puzzles, and a variety of deadly traps.

Shift DX is coming soon to Nintendo 3DS. Both digital and physical releases are planned.

Chud Chud Industries has released a new trailer for the upcoming Wii U game Temple of Yog. Check it out below:

Human Resource Machine is being slightly delayed on Wii U. The title was originally planned to release on October 15, but it’s now been delayed for about a week.

“But looks like our North American Wii U version will be delayed a week or so – we’ll post an updated date here as soon as we get it. It’s totally our fault for submitting a little late, we just tried to fill the Nintendo version with too many mushrooms!”

Wales Interactive, the makers of the upcoming Soul Axiom, are now pondering to extend their support to the New 3DS, thanks to the new Unity compatibility.

“Definitely. Actually, weirdly enough when we were out in Cologne we were talking to some of the developers of that. It is something that we want to actually try, because we’ve created a handheld version of Gravity Badgers for PlayStation Vita a while back which kind of did quite well. We know the 3DS is such a massive market. We’ve been to Japan a few times now as well, and we couldn’t believe people were playing it all the time. It will be something we definitely want to try out. For us especially, we like to develop and it would be a nice one for us to do.”

If you would like to check out the rest of the interview on Soul Axiom, check here.

Freedom Planet is now out in North America but still coming to Europe in November, so while you wait here are a few hours of gameplay footage from the game:

Here’s some footage of the game in action: