London, United Kingdom – June 14, 2016 – During today’s Nintendo Treehouse Live at E3 presentation, new information and features were revealed for the highly anticipated Pokémon Sun and Pokémon Moon video games coming exclusively to the Nintendo 3DS family of systems. Details of three brand-new Pokémon that will be discovered as players explore the Alola region have now been officially unveiled—introducing Pikipek, Yungoos and Grubbin.

The first of the new Pokémon revealed is the Normal- and Flying-type Woodpecker Pokémon Pikipek, which can bore holes in trees by striking them up to 16 times per second. These strikes can do more than drill through hard wood—they can even shatter stone. Pikipek can attack distant opponents by firing seeds with enough force to embed them into the trunks of trees. This Pokémon also likes small glittering objects and will hide these amongst their food stores.

The second new Pokémon announced was the Loitering Pokémon Yungoos. This Normal-type Pokémon is known for its humongous hunger and has a terrible temper when hungry. The majority of its long body is made up of its stomach, and it is never satisfied due to its swift digestion. Trainers will encounter some Yungoos that possess an Ability no other previously discovered Pokémon has had—Stakeout. This Ability means that the Pokémon’s moves can deal twice the normal damage to any Pokémon that switches in or enters the field mid-battle.

The final Pokémon revealed was the Larva Pokémon Grubbin. This Bug-type Pokémon relies on its strong and sturdy jaws, using them as both a weapon in battle and a tool to help them burrow into the ground. Grubbin can spew sticky threads from its mouth and can wrap these threads around trees, enabling this Pokémon to swing around and become much more mobile.

A brand-new battle format called Battle Royal which debuts in Pokémon Sun and Pokémon Moon was also revealed during the Nintendo Treehouse Live segment. In previous games in the Pokémon franchise, battles have generally been Trainers facing off against each other one-on-one. Battle Royal is a new battle system where four players battle against one another at the same time in a furious melee. Each of the four Trainers in the battle chooses three Pokémon and sends one Pokémon into battle at a time. The battle finishes at the end of any turn when all of the Pokémon of one Trainer have fainted. The players are then ranked, and a victor is declared based on the number of Pokémon each Trainer defeated and the number of Pokémon each has remaining in play. This is a completely new way to enjoy Pokémon battles, and many interesting strategies will be discovered as each player must try to predict who will attack whom, or choose whether to act to save a player who is in a pinch in order to claim the number-one position before the battle ends.

The Mythical Pokémon Magearna will be making its debut in Pokémon Sun and Pokémon Moon. Magearna was created by a scientist of uncommon genius 500 years ago, and it has the power to perceive the emotions, thoughts and feelings of other Pokémon. Stored in the centre of Magearna’s chest is the Soul-Heart, an artificial life which was created using the life energy of other Pokémon. Magearna has the Ability Soul-Heart, a new Ability that no other previous Pokémon has had. This Ability raises Magearna’s Special Attack by 1 each time another Pokémon in the arena faints.

In Pokémon Sun and Pokémon Moon, there is a QR Scanner function. Trainers will be able to catch the Mythical Pokémon Magearna by scanning a special QR code which is planned to be distributed in Europe at a later date. More details for this will follow.

Some extra details about the Pokémon can be found on the official site.

The game is being directed by Shigeru Ohmori. Junichi Masuda is the overall producer.
The team put some focus on the movement of the starters when in battle while producing the game.
Ledyba can be found in Route 1 of the game. It is #020 in the Alola Region Pokédex.
The Pokédex will show you the evolution chain of a pokémon or if it forms a pair with another pokémon.
Moves are now show in a list and you can bring up full details telling you if the move will be effective, super effective, or not effective on the opponent’s Pokémon.
You can also see how a stat has been altered while in battle.
Yungoos can be found in Route 1.
Pikipek has two evolutions and is #010 in the Alola Pokédex.
There is a festival in the next town that starts off your journey. A guardian of the island called Tapu Koko is mentioned during this festival.
this is where you battle Hau, and he has a Pichu in addition to a starter.
Popplio can know Disarming Voice.

A Pokémon Sun & Moon double pack has also been confirmed for Japan, including a copy of both games as well as two sets of 100 PokeBalls. Pricing is set at 9,960 yen. 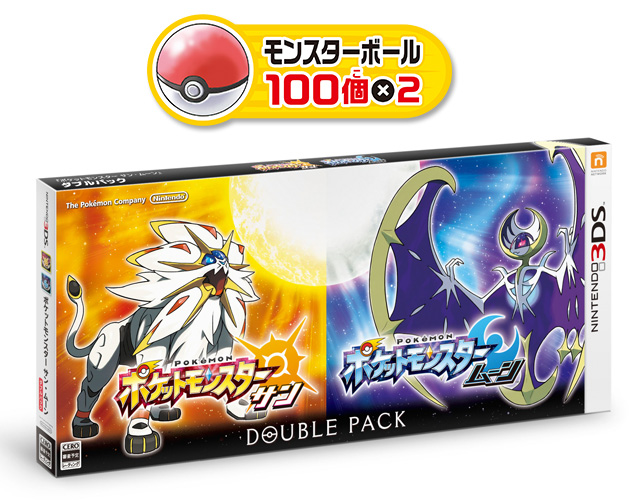 Moreover, a pair of New 3DS XL units were announced for the same region. One model is black and features Solgaleo and Lunala, while the other is yellow and has Pikachu on the front. Each model comes out on November 18 and will sell for 18,800 yen. 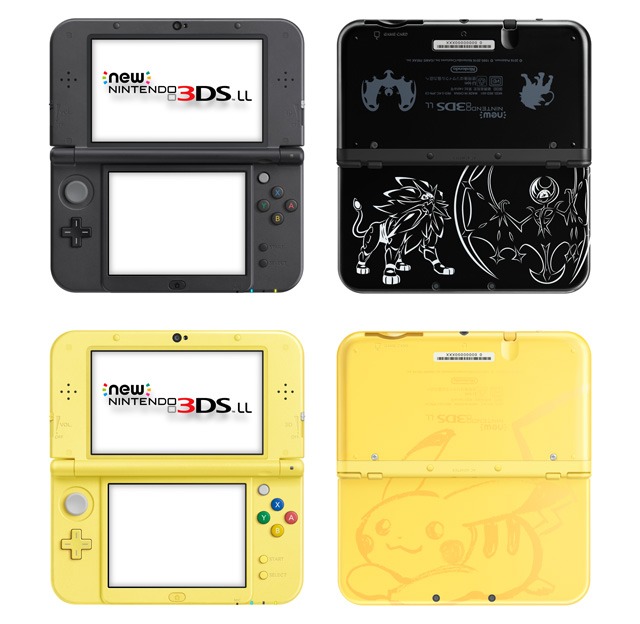