Over the past few days, Reggie Fils-Aime, President & Chief Operating Officer of Nintendo of America, was interviewed quite a few times about various different subjects. 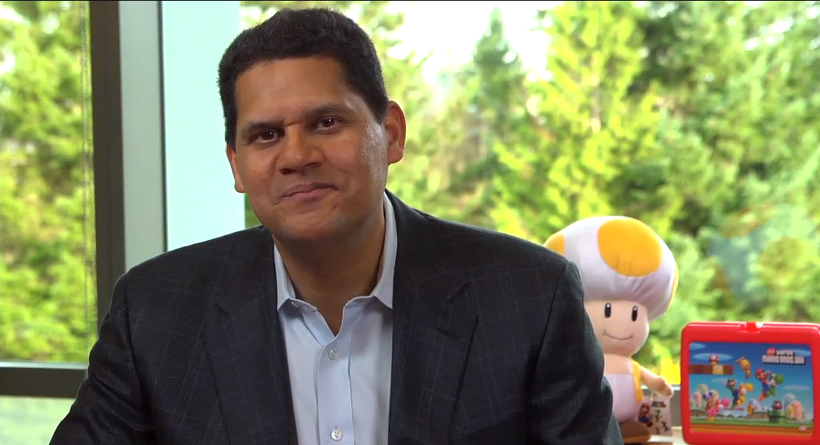 I compiled the most relevant statements he made in those interviews below.

From Polygon regarding Iwata’s “Apology”:

“It was not an apology. It was not a statement about the content we’re showing, essentially it was an ‘I hear you’ message.”

“Mr. Iwata is in Japan and what he’s trying to do is help explain to consumers in Japan what’s going on at E3. The correct translation of his message was: ‘Thank you for your feedback. We hear you and we are committed to continuing to meet your expectations,’ was essentially his message.”

“One of the things I find interesting is that if you look at E3 historically for Nintendo, typically what happens is a press briefing happens or our digital event happens, and then over the course of the next couple of days people see the games get to play the games and the appreciation and understanding of what we’re doing increases over those three days and continues to build into the holidays.”

“Splatoon is a game that people are loving right now, but if you rewind to E3 last year, Splatoon was being viewed as, ‘Yes, it’s innovative and it’s different, but the controls are a little hard and I don’t understand the mechanic of turning into a squid and going through the ink.’ There were all of these complaints. But now you look at the finished product and the satisfaction is huge.”

“For us, our goal is to make sure we announce the content, help people understand the content, but most importantly get hands on with the games.”

“I haven’t heard the feedback (for this year’s Best Buy demonstrations), but I think the feedback is going to be quite positive because what we do is make great games and they show well and they really lead to consumer excitement.”

From IGN regarding Zelda Wii U’s delay and it still being on the console:

On the decision not to show Zelda Wii U at E3:

Reggie Fils-Aime: “It goes back to the statement i made earlier about how we view E3. We just fundamentally don’t believe in showing content at E3 that is going to be a long term proposition. We like to show content that typically will launch in the upcoming Holiday and maybe extending into the first half of the following year. And at this point, the new Zelda for Wii U is not a 2015 project.”

On how Nintendo showed Zelda Wii U last year even though it seemed like a Q3 game:

On whether he worries that not showing it sends the message to current/potential Wii U owners that it’s not a 2016 game:

Fils-Aime: “Our mentality is more near-term when we think about E3. And, yes, we take it on a case-by-case basis. There’s also a recognition that we didn’t want to frustrate the consumer. We could have scored a lot of points and showed some little tidbit of Zelda Wii U, but in our collective opinion the belief was, in the end, that would cause more frustration than benefit.”

On whether that’s based on knowledge gained from years of having to delay Zelda:

Fils-Aime: “It’s based on a collective belief — and when I talk collective, I’m talking about [Satoru] Iwata, Mr. Miyamoto, myself, Tatsuya Eguchi, [Shinya] Takahashi. The collective braintrust within Nintendo. It was our collective belief that it would have a negative effect of showing a game that we knew wasn’t going to be a next-six-to-eight-month-type of game.”

“We focus on the here and now. We’re not like other players in the space that might show a little bit of something that is going to be years in the making. It’s simply because we believe that in getting the fan base excited, we really want to satiate that excitement as soon as possible.”

“We’re at a point where we have to take our volume estimates and double them or triple them based on the levels of demand we’re seeing. We’re working very hard to meet that demand.”

– Fils-Aime said Nintendo has been working with its suppliers to “push the envelope” for production;
– “the consumer demand continues to outpace supply”.

On how the partnership with Activision for Skylanders SuperChargers came about:

Reggie Fils-Aime: Activision came to Nintendo at the outset of Skylanders development four years ago. So there was always this thought of, wouldn’t it be great if Nintendo [intellectual property] could somehow be integrated into the game?

Jump forward to last year’s E3, when we introduced amiibo, (Nintendo figurines that work with its games) and we articulated our strategy of having figures that could work across games. At the same time, Activision shared with us their vision for their next installment of Skylanders that would include vehicles. And that’s when the conversation became serious.

On why Donkey Kong and Bowser were chosen:

Fils-Aime: Skylanders is all about creatures. So as we looked at our roster, those two fit the game. They’re much more creature-like in their gameplay mechanics and their movements, so those were the two that we agreed would make sense.

On the business strategy behind the collaboration:

Fils-Aime: We are producing amiibo as quickly as we can and getting them out into the marketplace as quickly as we can. With the most recent wave, over about a 30-day period, we sold just in the U.S. over a million amiibo. Through the end of March, we’ve sold 10.5 million amiibo globally, more than two-thirds in Canada, the U.S. and Latin America.

There’s a huge amount of demand and that demand is even more concentrated in the Americas. It is a manufacturing process that takes some time and we had to scale up our supply chain, and it’s still scaling up to try and meet that demand. (Nintendo has said that Marth and a few other hard-to-find amiibo will be hitting shelves in limited quantities over the next few days.)

On Nintendo’s strategy in light of the PS4 and Xbox One outselling Wii U:

From a Nintendo perspective, we clearly have strength here in the Americas, we have strength in Europe and we have strength in Japan. That isn’t necessarily true of some of our more direct competitors. We’ve also said publicly that we are already hard at work on our next home console and that’s another element we’ll be talking about much later.

Fils-Aime: I can’t talk to you about our upcoming mobile games. The core construct in terms of whether a game is free to start, has in-game transactions, or costs a certain amount and you own it forever — those kinds of decisions need to be made at the time the concept is being created for the particular game.