During the week, Nintendo of America uploaded the remaining interviews from the Nindies Lounge at PAX Prime 2015 to its YouTube channel, where Damon Baker interviews WayForward about Shantae Half-Genie Hero and Brainseed Factory about Typoman.

You can watch them below:

Martin Sauter, the Art Director behind FAST Racing NEO, has recently revealed the game will feature a brand new Hero Mode specifically designed for those that love a challenge and are fans of F-Zero.

In FAST Racing NEO, normally when you go through the shiny strips on the sides, they serve as a way to replenish your boost gauge, but in Hero Mode, the gauge will now serve as the racer’s shield. With that in mind, Hero Mode is specifically designed to be a challenge for the more experienced players, and you must always finish in 1st place in order to progress to the next race.

Martin Sauter told Nintendo Life that the team is confident that Hero Mode and the difficulty associated with it should quench the thirst for “F-Zero starved players”.

If you would like to know more about the game, Nintendo UK has published a new interview with Sauter where he talks about the development of the game, sci-fi inspirations, multiplayer, difficulty and controls, among other topics. You can give it a look here.

You can also take a look at the game’s split screen multiplayer in the video below:

Yacht Club Games has just released the new Shovel Knight 2.01. patch on Steam and Humble, an update that is’t out on Wii U and 3DS just yet, but that will be making it’s way into those versions soon. 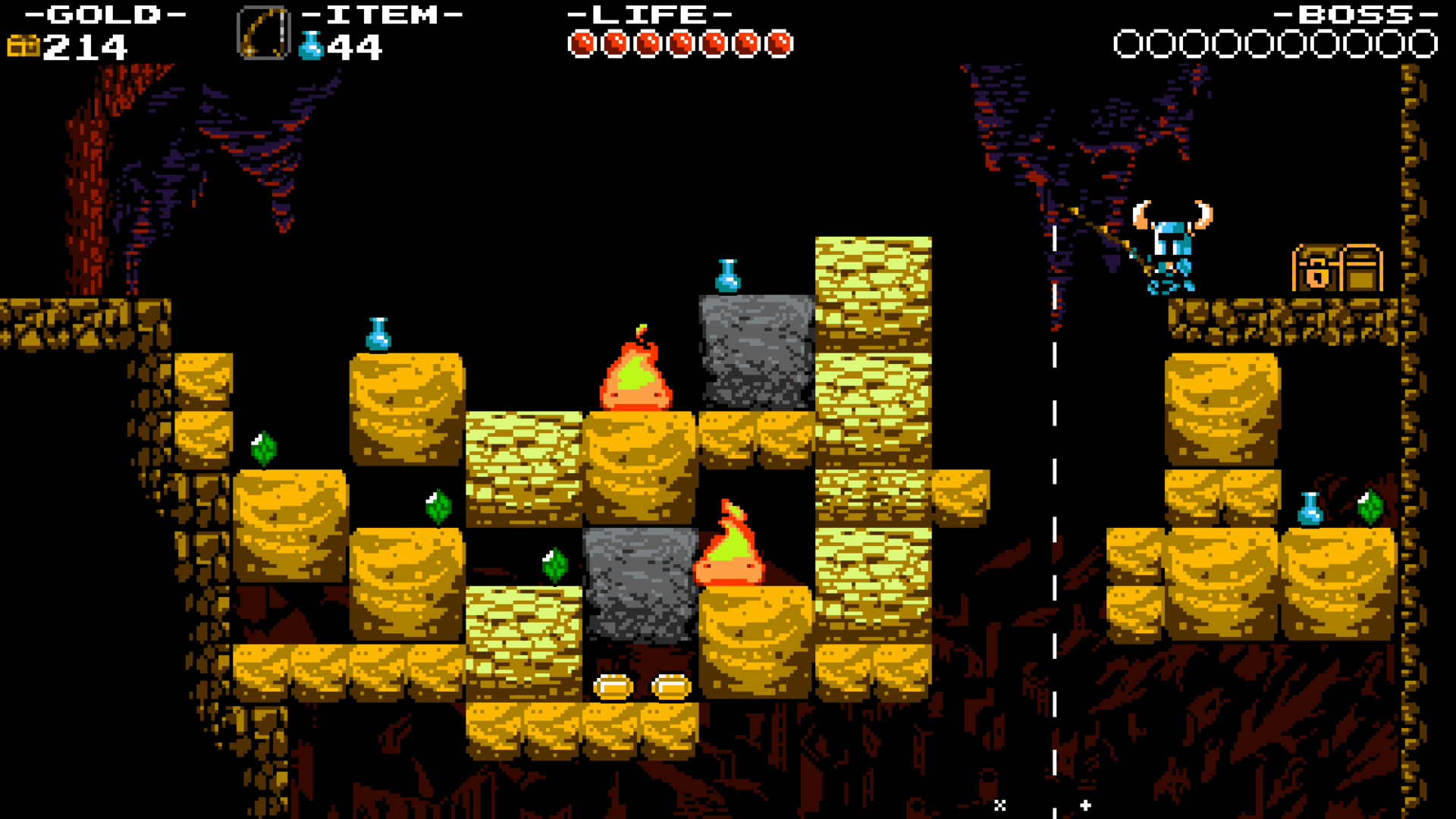 Head past the break for a breakdown of what you can expect in Shovel Knight’s latest version.

Starwhal recently released on the Wii U eShop during the week, so you can find some footage from the title below, in addition to some new screenshots.

Golden Ruby Game’s Extreme Exorcism is also out on the Wii U eShop. You can find some footage from the game below:

Witch Beam has released an official launch trailer for Assault Android Cactus, so enjoy the trailer below even though it will take a while longer for the game to be ready for the Wii U.

You can also check an initial look at the game below:

Juicy Beast’s Toto Temple Deluxe is coming to the Wii U eShop on October 1, with price set at $9.99.

You can find a rather funny trailer for the game below:

Another game releasing on the Wii U eShop soon is  BNC Design Studios’ Gemology. The gravity puzzle game will release on October 2 and cost $6.99.

You can find an overview of the game and some screenshots below:

Gemology is a unique gravity puzzle game. It draw inspiration from titles like Tetris, Dr. Mario, and Bejeweled, however, actual gameplay is significantly different. With two games to play, Lapidiary and Annealiation, Gemology is an original title that challenges player’s wit and judgment.

The first of these game modes, titled Lapidiary, tasks players to solve a series of pre-established puzzles. The objective is to mine (remove) all of the raw gem-formations in each shaft. Players accomplish this by calling down rocks, breaking them into gems and completing rows. Unlike the aforementioned titles, the player has no control over the movement of these objects. Rocks will fall
from the left and right sides and the player must strategize how to allocate these pieces by altering the environment.

Lapidary: “engraved on or suitable for engraving on stone and therefore elegant and concise.”

The second of these modes, Annealiation, is an arcade experience challenging the player’s sense of priority and judgment. In a frantic game of risk and reward, players must choose to prolong their match or score big. Combine gems for higher values or save smaller gems to extend the timer. Simple controls and easy-to-master methods allow players of all ages to enjoy this exciting experience; dynamic gameplay and responsive decision-based consequences make this an experience to keep coming back to.

Anneal + Annihilation. Anneal: “to subject to a process of heating and slow cooling in order to toughen and reduce brittleness.”

Touch screen controls allow the user dramatically-increased control over both games and involves the player further with direct responsiveness. The Wii U GamePad is also utilized to offer three different playing options: Immerse yourself in the world of Gemology with unique content on both the TV and the
GamePad, Off-TV Mode keeps the Gemology experience on the GamePad; and an additional Observers Mode allows for easy viewing.

Two additional options to play, level creator for Lapidiary and an Annealiation multiplayer mode, are currently under development and will be made available as a free update to users once available.

Legendary Bros has announced that its new Wii U game, 8 Bit Hero: The Final Knight, is coming to the Wii U eShop in Q4 of this year.

You can find more information about the game in the infographic below: 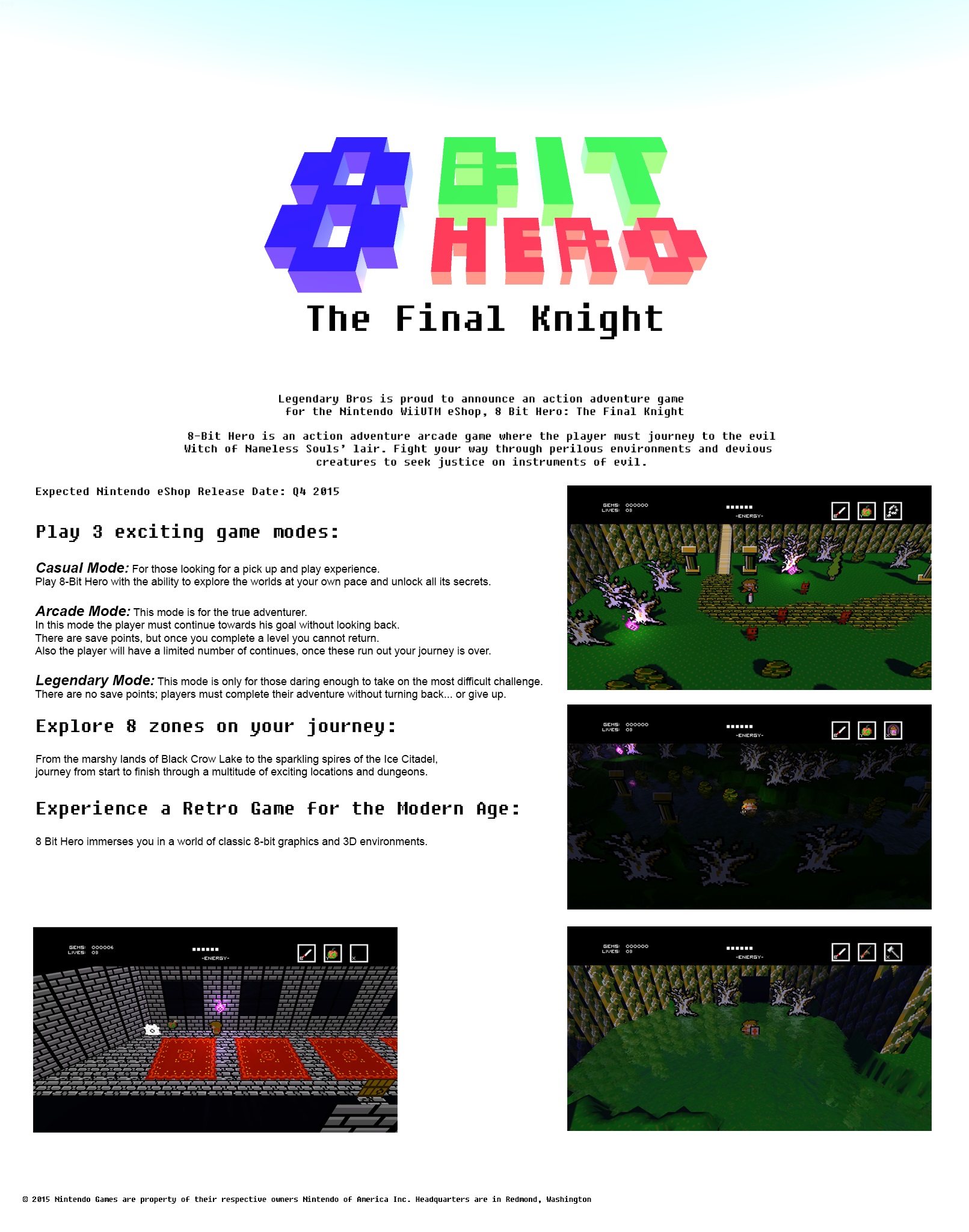 Megamagic: Wizards of the Neon Age

BeautiFun Games, the creators of Nihilumbra on the Wii U eShop, have announced a new project entitled “Megamagic: Wizards of the Neon Age” and are bringing it to Kickstarter in hopes of realizing their vision. According to them, if a certain amount of support is reached, the game could eventually come to the Wii U.

You can learn more about this mixture of action RPG and real-time strategy gameplay of a game inspired by the ’80s in the video below or at the Kickstarter page.

BeautiFun Games are looking to raise $20,000 for funding by October 14, so go show them your support if interested.

In a recent website post, SmileBoom has shared that the company has “already proceeded to the final stage for delivering SmileBASIC via Nintendo eShop”. The company is now working with Nintendo to get the title out in overseas territories as soon as possible. 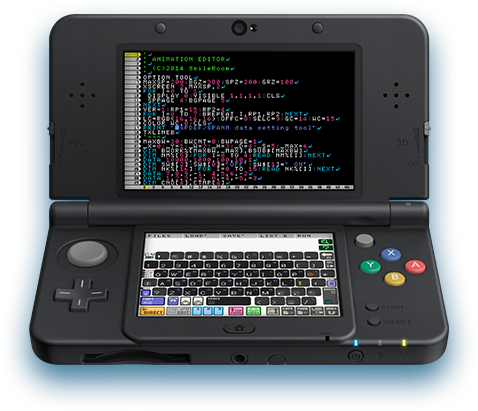 You can find the full notice below:

We really apology that we have posted no updates since the last posting in May.

We are almost there! All necessary development work was completed a few weeks ago and we’ve already proceeded to the final stage for delivering SmileBASIC via Nintendo eShop. For now Nintendo and SmileBoom is working hard to make it available to all awaiting fans outside Japan as soon as possible.

Once we obtain the final approval, the delivery date will be determined and can be announced officially.

We really appreciate all of your patience. It is really coming!