During this week, Kit and Krysta started a multi-part playthrough of the Year Walk on Nintendo Minute. You can watch the 1st episode below:

Playtonic recently updated its website with some new info on Yooka-Laylee.

One of the most important aspects of this new update is a first look at an as of yet unnamed NPC. Here’s what they had to share: 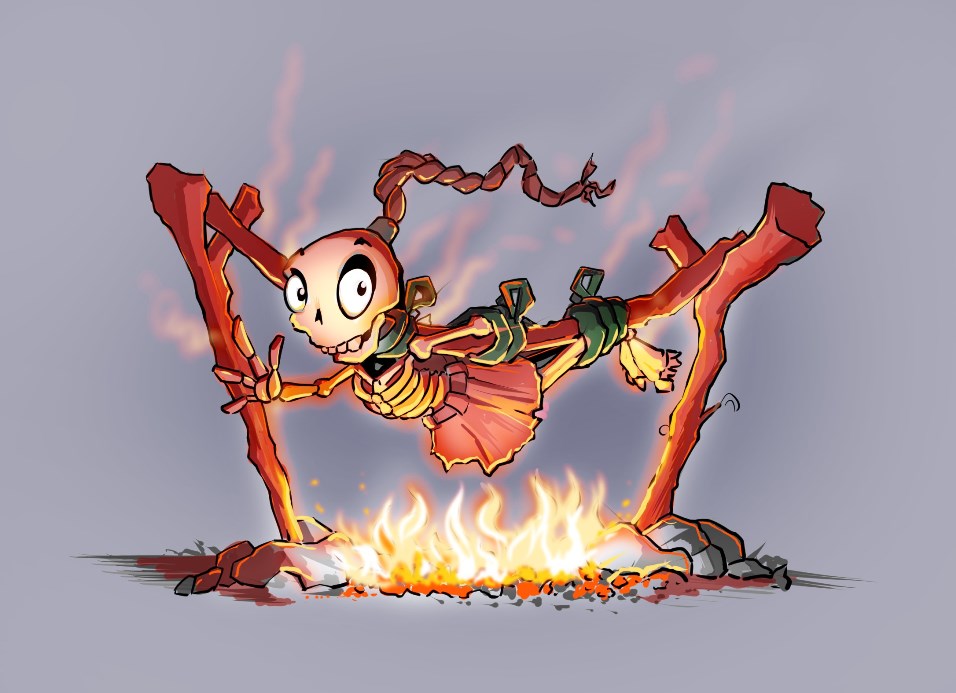 “One new character you may have spied in a recent issue of Edge is the slender lass below. Crayoned by our own Kev Bayliss, this yet-to-be-named NPC will require Yooka and Laylee’s assistance on the very first world of the game. Obviously she’s forgot to turn the iron off or something and they’ll need to go and get the spare keys off her landlord.”

In addition to this, you might want to check the interview the studio participated in at EGX, by visiting the website here.

Comcept recently uploaded the second episode of the Mighty No. 9 MighTV where lead composer Manami Matsumae tries out the Challenge Mode that is being made available to backers. Check it out below:

13AM’s Tom McCall was recently interviewed by Nintendo Life ans said that the team is very much interested in the idea of possibly bringing Runbow to the 3DS eShop at some point. Besides looking into that, he also confirmed the team is patching up issues with the game and planning some additional content for it. You can check out the interview below:

Curve Digital’s Pumped BMX+ launched on the Wii U eShop during the week, and with it comes a new launch trailer you can watch below. It is also followed by some footage from the game.

“For EU, we’re trying hard to release it as early as possible, but apparently it won’t be ready until November? We’ll try and speed it along.”

Meanwhile, if you live in North America and are interested in the the game, you might want to know that some players are unfortunately encountering a notable problem with it. During a particular cut-scene, a bug pops up that can cause the Wii U to freeze, stopping you from progressing in the game itself.

GalaxyTrail said on Miiverse that they’re aware of the problem and are looking into it so they can patch the game soon. They also shared some temporary solutions you can find below:

We’ve recently discovered that the game may freeze on some consoles in one specific cutscene. It happens after Fortune Night when Syntax the robot says “Hello sir. Have you beheaded the intruders yet?” If the game freezes at this point, here are some solutions you can try to avoid it and continue with the game: 1. When Syntax starts saying this line, press any button immediately to skip to the next line. 2. Pause the game at the beginning of the cutscene and select Skip Scene from the menu. 3. Transfer the game from the Wii U console to an external hard drive and play it from there. You can find information on external devices through Nintendo’s web site. We will patch the game as soon as we can to fix this, but in the meantime, we hope these suggestions help. Thank you for playing!!

You can also find some gameplay footage of the game in the video below, in case you have never seen the game in action yet.

Last month, OXiAB Game Studio announced that free DLC would be coming to Canvaleon, and you can now check below what is expected to arrive in the game this November. 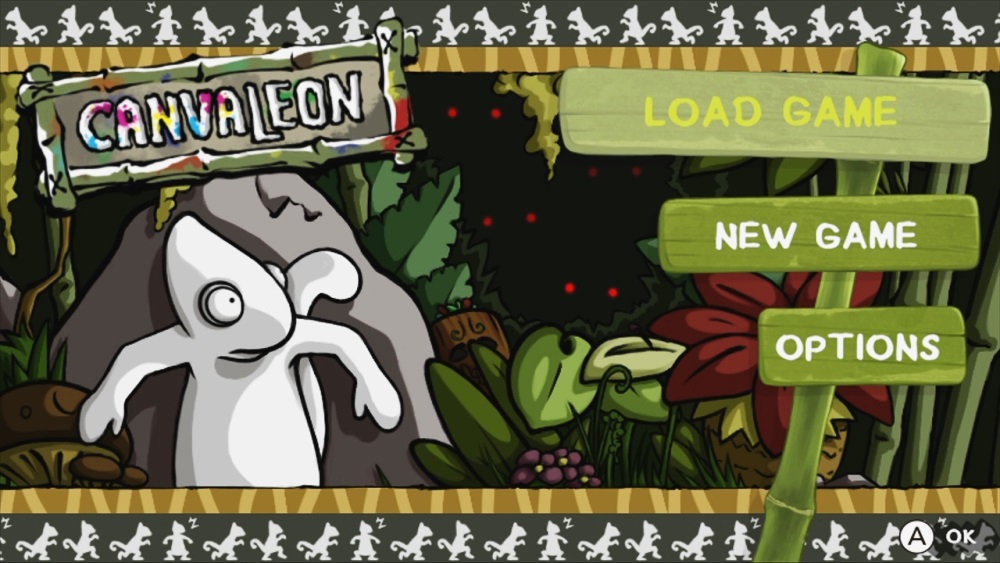 You will be able to access this new game mode from the main menu. It consists of mini-levels for the player to learn all the dynamics of the game. In addition, the “SP MISSIONS” will also incluide 10 totally new levels. These new levels will be a challenge for all the players. Furthermore, the “SP MISSIONS” will have its own song, composed by the author of the Canvaleon’s original soundtrack.

When starting a new game, the player can choose from three different difficulty levels:

Extreme Mode: Players who think that the “Original mode” is not very hard, now have a new challenge. In this game mode, if the enemies detect you, you will be defeated and you will have to start the level from its beggining.

With the DLC, Canvaleon will have a new statistics screen. You will be able to see easily the levels completed, ranges and times. You can see if you have achieved the villagers and the collectible CD’s as well.

* During the game, Doodle will have more importance because he will communicate more often with Canvas in different situations and will contribute to improve the Canvaleon’s gameplay.

* We have improved the camera, so the phrase “I can’t see the enemy!” will no longer be an excuse to advance in Canvaleon.

* In addition, the DLC will include some visual enhancements that will detect in a better way some particular elements and enemies at certain stages.

Nostatic Software’s VoxelMaker released on the WiiU eShop during the week. Here’s a trailer for the game:

The Deer God, a game by Mobot Studios, will finally be making its way to Nintendo’s Wii U console on the eShop this December. 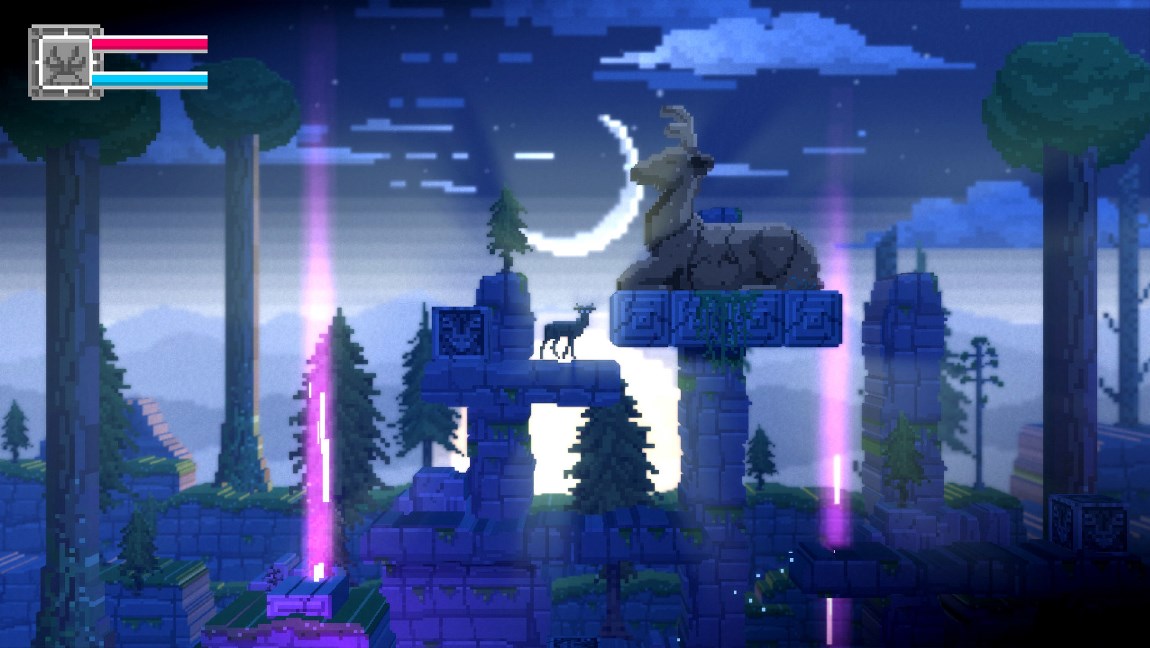 You can find an overview of the game with a description and list of features below:

Game Description:
The Deer God is a breathtaking 3D pixel art adventure that will challenge your religion and your platforming skills. It’s a game about survival, reincarnation, and karma; all set in a unique 3D pixelized world. Feast your eyes on the beautiful lighting, day and night system, and vast landscapes. Become one of the most beautiful animals on planet earth. LIVE AS A DEER. SURVIVE AS A DEER.

The Delusions of Von Sottendorff

Coming to the 3DS eShop this winter, is Delirium Studios’ The Delusions of Von Sottendorff and his Square Mind, a mix of platforming and environmental puzzles.

The game stars Baron Von Sottendorff, a well-to-do aristocrat, who believes he’s living the good life in early 20th century Europe. However, he has been trapped inside a reproduction of his mansion created by his own lunatic mind and players will need to help him escape the madness. By completing various levels, you’ll gain objects that will help the baron to recover memories from his life.

You can find an overview of the game below, followed by a teaser trailer and some off-screen footage.

Unique Game Mechanics – Von Sottendorff is a non-traditional take on the classic platform-puzzle genre as the good Baron explores the constructs of his madness. Rather than just control one character, players can also manipulate the 200 rooms in the game by using the touch screen to solve puzzles.

Moving Story Line – Recover all of the Baron’s lost memories and discover the reason behind his descent into madness.

Ginger: Beyond the Crystal

BadLand Indie has announced that it will be publishing Ginger: Beyond the Crystal, a 3D platform adventure developed by Drakhar Studio, on Wii U and other platforms in 2016.

You can find an overview and trailer for the game below:

“(Ginger: Beyond the Crystal) follows a heroic young boy named Ginger whose entire life crumbled around him when an ancient crystal exploded. Thinking he is the sole survivor of his world he is astonished when he meets another lone survivor, the mayor, who explains to him that all the people who one inhabited their beloved planet have been taken to other planets and are now trapped there. Ginger must traverse the crystal to reach other worlds where he will be able to find and save his people. Along the way Ginger must reconstruct the world as he knew it by building homes for the people he manages to save. Full of mini-games, puzzles, skins to earn, and, of course, platforms you’ll spend hours aiding Ginger on his quest Beyond The Crystal.”

Prismatic Games managed to fund Hex Heroes through Kickstarter last year, and after some time have finally released a new trailer for the game, that will later be coming to the Wii U. Check it out below:

Juicy Beast’s Toto Temple Deluxe launched on the Wii U eShop during the week, so you can find the launch trailer and some footage of the game below.

IGN and GiantBomb have released some more gameplay videos with commentary showcasing Witch Beam’s Assault Android Cactus. While you wait for the game to release on the Wii U, take some time and check the out:

PencilTestStudios has now released Armikrog on PC so, while you wait for the Wii U version of the game, you can enjoy the new trailer and footage from the game available below.