During Sony’s E3 2016 media briefing, it was announced that Crash Bandicoot will be playable in Skylanders Imaginators.

Turns out, the character isn’t exclusive to PlayStation and you’ll be able to play as Crash in the Wii U version of the game, if you own the figure. Right now there are only plans to offer it in the PlayStation 4 Starter Pack version though. However, Activision will likely give Crash a standalone release at some point in the future as well. 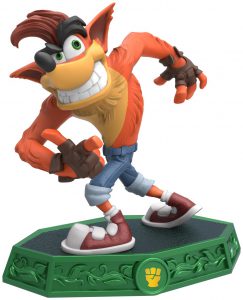 Here’s the backstory for Crash in Skylanders Imaginators:

In Skylanders Imaginators, a wormhole has opened in Skylands and the great Aku Aku appears! He comes to announce the once in two decades Synchronization Celebration. It is the time when all of the worlds align perfectly. They are having a huge celebration event in the Wumpa Islands and want to invite the Skylanders. But with Kaos on a quest to take over Skylands using his army of Doomlanders, the Skylanders must focus on stopping his evil plans. Never one to shy away from danger, the legendary marsupial Crash Bandicoot travels through the wormhole to join the Skylanders in the ultimate battle against Kaos!

And the official trailer and some gameplay footage both from Crash and the game in general: