You can find them all below: 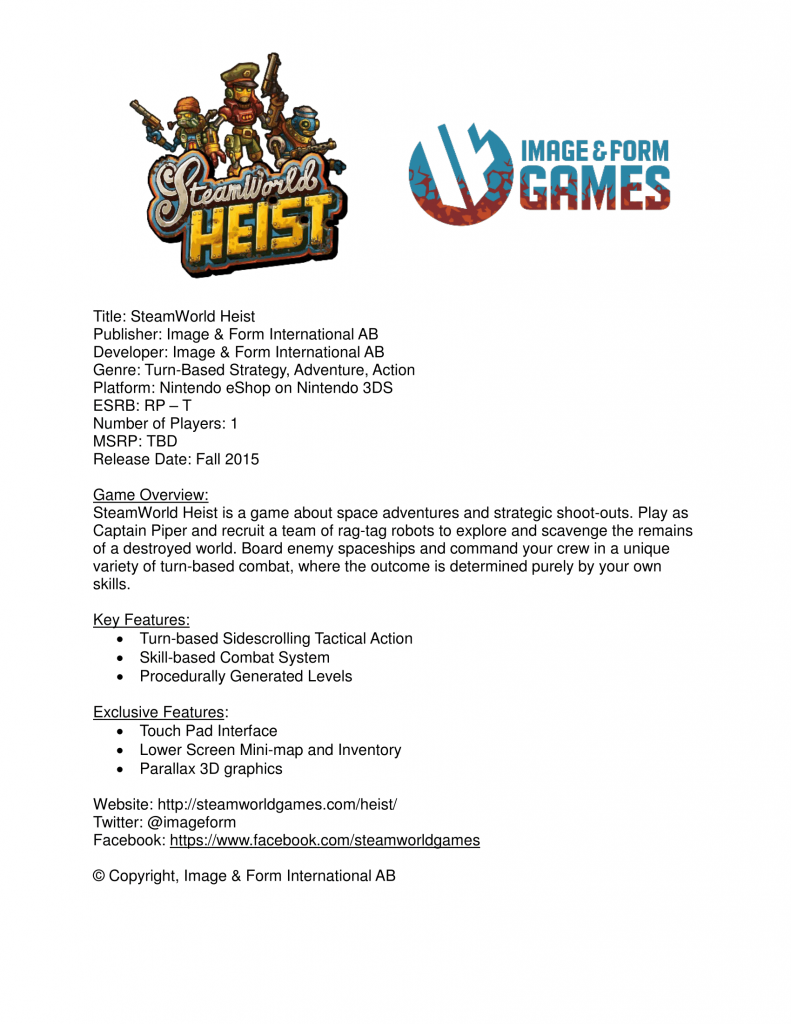 It’s been announced that SteamWorld Heist will come to the 3DS first. Can you give us a brief history of how you came to this decision?

We thought about it long and hard… no, it was actually quite easy! At one point we discussed going to PC/Mac/Linux first, but please see the next question for the main reasons behind the decision to go with the 3DS first. SteamWorld Heist will come to 3DS first, and then to all other current-gen platforms. The order among them is yet to be determined. It could be important to mention that we haven’t made any deals – we’ve decided to let the release schedule rest on our own choices.

What are the biggest factors for you when making a choice like this, and what would you say is the most notable reason for choosing 3DS as the launch platform?

First, it’s a matter of conscience. It dates back to August 2013, when we first released SteamWorld Dig on Nintendo 3DS and raced to the #1 eShop spots in America, Europe and Australia. In a fit of emotion I couldn’t keep my trap shut and in some forum ecstatically announced that our next game would MOST DEFINITELY come to the 3DS first.

Dig was our first self-published game that received major attention, and as a result I was speaking to media the whole time. Some of the other guys in the office, cautious of my transformation from mediocre programmer and wallet to self-proclaimed media rock star, suggested early that I shouldn’t be over-promising, that those sneaky journalists would try to make me divulge things the team would have to deal with later. I promised them I wouldn’t promise too much, and then promptly promised that our next release would hit the 3DS first. At the time I shrugged it off and thought that the intense love we were getting from the 3DS community might wane, and that nobody would remember my “3DS first!” outburst long after the fact.

But then I saw a discussion on NeoGAF around six months ago where people were discussing SteamWorld Heist, and someone mentioned that “the devs have promised that it’ll come to the 3DS first.” The Internet has a long memory!

Second, it’s a matter of convenience and production schedule. We’re familiar with 3DS development, and we decided early that we would anyway have to develop specifically with the 3DS in mind, since it’s so different from the other platforms. In other words, it’s no mere port – SteamWorld Heist is built for the 3DS from the ground up. That obviously doesn’t mean it’ll be less of an experience on other platforms later, but it really makes good use of the two screens, and we’ve got performance issues sorted out right off the bat.

And third, I’m proud to say it’s a matter of loyalty. We have been surprised to see how steady the sales of the 3DS version of SteamWorld Dig have been. In the end, we’re happy to give something to a community that’s very supportive, and perhaps doesn’t see too many third-party “first releases”.

E3 is the first time you’re showing a playable build of the game on 3DS, having previous opted for the PC version at shows. Has it been particularly challenging – on a technical level – bringing this game to the 3DS?

In a sense it IS challenging, because you always need to keep track of the frame rate on the 3DS. But although SteamWorld Dig was our first try at the platform, I’d say we’re pretty good at developing for the 3DS. We make pretty good use of it.

Is it the fully featured game on the portable, or have any sacrifices been made in comparison to the Wii U eShop and other HD versions?

It’s fully featured. It would be unfair to bring a game early to one platform and then flesh it out considerably in subsequent ports, saying “hey, be happy, at least you got it first.” It’s a lose-lose proposition, I think, almost like punishing early adopters. A sure-fire way of disappointing everyone a tiny bit.

Is the adjustment to the smaller screens a simple 1:1 in ratio, or have you – like in SteamWorld Dig – made adjustments to viewing angles and the camera between the portable and HD versions?

I think you’ll be able to see a bit farther in HD versions, which actually addresses a shortcoming on all other systems – the lack of a persistent secondary screen. The 3DS has a great advantage there, that we can use the lower screen for an in-combat ship map. I think that’s good to remember if someone slams the platform for its lesser performance, small screen estate, and so on. The very existence of two screens is fabulous, and contributes to the immersive feeling when you play on the 3DS. You don’t need to muck about calling up screens to get the information you need – it’s right there.

Moving onto the game in more general terms, is the final structure and open-ended nature of the campaign now nearing completion? How far have you progressed in completing the game’s world (or universe)?

That’s a very interesting way of posing the question. How far “towards the end” of SteamWorld this game is remains to be seen. We have quite a few ideas for games that come “after” SteamWorld Heist, chronologically.

When George Lucas announced parts 1-3 of Star Wars, it sounded pretty strange – but apparently this was something that he’d had in mind from the start, being quite frank about the original movie trilogy being parts 4-6. I specifically remember seeing “Episode V” and wondering about it when I first saw The Empire Strikes Back. Where were episodes 1-3?

I’m not saying that we’re anything like George Lucas! But on a grand scale Star Wars legitimised producing prequels and sequels out of order. The next game we’ll make in the SteamWorld series is probably going to take place before SteamWorld Heist. Since we feel that we can use SteamWorld as an umbrella universe that can contain any kind of game genre, we feel that progressing the story in order is not that important. In the end, you’ll have the whole picture. Calling up another movie reference here, Memento does it all backwards, and is no less interesting for it.

With the music partnership with Steam Powered Giraffe, robot designs and fan submissions for hats etc, is it fair to say that you’re putting a great deal of effort into the ‘character’ of this game? How important is this factor in development?

It’s VERY important – and in a sense a product of lessons learned from SteamWorld Dig. We had almost no collaborations at all in that game, apart from the eminent H.M. Hammarin who made the music and sfx for Dig. The characters in Dig were likable, but they were quite “cardboardy”, if you understand how I mean. It’s no coincidence that Rusty is the quiet, strong type – very much like Clint Eastwood’s Bill Munny from Unforgiven. We realized that we wouldn’t have time and resources to flesh out the characters very much that time.

With SteamWorld Heist we’re in a new position. We’ve been able to spend much more time on the development, and not only in terms of gameplay and graphics: this time around we’ve worked more on the music, the story, the characters. That means that we’ve been able to work more with references to other things, and to give adequate back stories – proper places – to the characters that appear.

Are you confident that the 3DS will, once again, deliver a significant proportion of this game’s sales and audience?

I’ve played SteamWorld Heist extensively, so – yes, I believe so! It’s remarkable how well it works on the 3DS, and it’s very hard to play the game and put it down after just a few minutes. Even if I decide to do a short playthrough where I want to look at a specific detail, I don’t go “unpunished” – five minutes quickly turns into an hour. There’s something about being so close to the screen – it’s so immersive, and every successful shot is SO gratifying. It’s almost like tactile feedback.

Do you have a final message for our readers and 3DS owners?

You may not know this, but Nintendo Life is a distinguished place for us. Before releasing SteamWorld Dig, getting a write-up – any kind of write-up – on Nintendo Life was one of our written goals. That’s how small we considered ourselves, and how hugely we thought of the site.

If you look through the history of articles Nintendo Life has published about us and our games up until now and look at the comments, you’ll find that almost all comments are very positive. Thank you for that, readers – it’s probably hard for you to imagine how often game developers like ourselves “wear our nerves outside our shirts”, as we say in Sweden. Encouragement like yours is very much like oxygen – it gives us the strength to go the extra mile.

So, readers and 3DS owners: Prepare for boarding this fall, and prepare to be entertained.