In a recent blog update, on Project X Zone 2’s Japanese site, Monolith Soft producer Koji Ishitani gives us our first look at the game’s main vehicle which was made by Naohiro Washio, of Mobile Suit Gundam 00 and Gyrozetter fame. 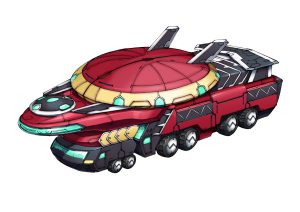 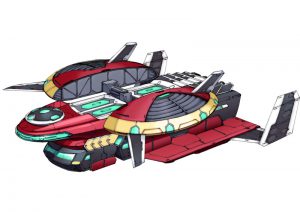 Siliconera also translated some info found in this blog post that you can find listed below:

– Dr. Chizuru Urashima (the white-haired woman dressing in red, we previously saw) is the head of Shinra’s Equipment Division;
– Chizuru pilots a new vehicle called the “Ryuki Ichi-go” (which roughly translates to Ryuki #1 in English…). It is known as the Dragonturtle MK. 1 in the English version;
– This is a well-equipped transport vehicle that can travel to various worlds, and more details about it will be revealed in the future;
– It also posseses a Terrain mode and flight mode, which are portrayed in the pictures above, and act as a mobile base of operations where the characters will gather;
– Monolith’s Ishitani has known Naohiro Washio for quite a while now, and previously talked about how it’d be nice to some day work together. With Project X Zone 2, he felt that now that they could use some of his mecha designs, it’d be now or never;
– Other guest designers will be revealed in the future.