Nintendo released a new trailer for Bravely Second: End Layer as the RPG launched in North America last week. In this new trailer you can watch below, a closer look at the jobs system is given.

Due to the release of the game in North America, Game Informer interviewed co-producer at Square Enix Masashi Takahashi. Takahashi talked about topics like player feedback, the new approach to character designs in this game, how the job classes were decided, and the series’ future. You can find the full interview over here.

Capcom has shared a new batch of details and screenshots from Ace Attorney 6. Below, you can find a roundup of the details translated by Gematsu introducing the game’s “3D Fingerprint Detection” system, a gallery with the related screenshots, and a new commercial released by Capcom.

Capcom has recently issued a new Monster Hunter Generations trailer to showcase the gameplay mechanics known as Styles and Hunter Arts. According to the company, these “allow for an even more visually striking and personalized playstyle than ever before”.

Here’s a rundown of the four available Styles from Capcom:

Each hunting Style opens up different ways to tactically take on foes. Each Style also allows access to different Hunter Arts, indispensable combat skills and power-ups that can be unleashed with the tap of a button when charged, making it easy to execute these special moves.

The game will also make its first public playable debut in the west at PAX East.

You can find the new Monster Hunter Generations trailer below, followed by several gameplay videos:

Bandai Namco has recently shared the very first trailer for Dragon Ball: Fusions. Give it a look below:

Bandai Namco has recently released two more My Hero Academia: Battle for All character videos, this time covering Tenya Iida and Ochako Uraraka. Check them out below:

All pre-orders and day one launch copies of 7th Dragon III Code: VFD come with a 28-page art book, featuring designs from Miwa Shirow. It contains the designs for the game’s numerous character classes, enemies, environments, and much more.

SEGA has now prepared a preview of the 7th Dragon III Code: VFD art book, which you can find below:

Atlus has issued a new Etrian Odyssey V trailer highlighting the game’s Fencer class. You can find it below:

Meanwhile, Nintendo Everything has translated the Famitsu details regarding the various races and classes in Etrian Odyssey V, including the above mentioned Fencer class. You can find the translated details over here.

Here’s an official overview of the game:

You can find the announcement trailer for Shin Megami Tensei IV: Apocalypse below. You can also read a post from Atlus talking about the western name change here and find the official site over here.

Following a leak from the ESRB, XSEED has now officially announced plans to bring Corpse Party to North America on 3DS this summer.

Corpse Party will be sold at retail as a “Back to School” edition for $49.99 and digitally for $29.99, coming with miniature figurines of Naomi Nakashima and Seiko Shinohara, as well as a soundtrack CD featuring nearly 80 minutes of music from the game, including three tracks exclusive to this version.

Below you can find the official overview of the game and the teaser trailer.

Remastered from the 2011 PSP game, the Nintendo 3DS rendition of Corpse Party will feature redrawn, high-resolution character sprites, newly arranged music tracks, and 3D art stills, as well as four new Extra Chapters exclusive to this version that provide insight into lesser-shown characters and plot elements previously left unexplained. This title has been rated “M for Mature” by the ESRB.

In Corpse Party, players take control of a group of Japanese high school students who inadvertently engage in a pagan ritual and find themselves inexplicably transported into a whole other space: an inescapable echo of a long-since demolished school building where a series of gruesome murders once took place. They must now evade the grasp of the tortured souls who roam the halls of the doomed Heavenly Host Elementary School, lest they join the ranks of the dead themselves.

As players advance through Corpse Party, they will strive to avoid the game’s more than 20 “wrong ends,” in which tragedy takes over and one or more characters suffer a grim demise. Whether buried alive, forced to swallow scissors or cannibalized by a friend, wrong ends are often as disturbing as they are morbidly intriguing. To advance through the game, players must reach the one true ending in each of the game’s five chapters to unlock the next leg of the journey. The game features several “true” endings depending on how many characters survive the journey through the haunted school – and at Heavenly Host Elementary, survival is no easy task.

The publisher has also put up a Tumblr post clarifying certain aspects of the release.

According to XSEED, all voices will be retained and censorship avoided:

– Worry the First: The 3DS version has no voice-acting, right?

– Worry the Second: The 3DS version has to be censored, right?

Nope! All versions of Corpse Party released by XSEED Games are presented to you with no content removed or altered whatsoever (save for the small handful of sniggly things we had to change for legal reasons, like a Nokia ringtone). The ESRB M rating exists for a reason, after all, and our M rating for Corpse Party 3DS has already been secured.

Marvelous has released a new batch of Story of Seasons: Cherished Friends of Three Towns screenshots based on Famitsu’s coverage from last week. You can find them in the gallery below:

Natsume recently launched Super Strike Beach Volleyball on the North American and European 3DS eShop this week. The publisher has since uploaded a trailer, which you can find below:

You can find the scans in the gallery below:

When the game was announced last year, it was confirmed that the game will have two protagonists and take place in two countries. Keita and Jibanyan’s story will be in St. Peanutsburg, USA while Inaho and USApyon’s story will be in Sakura New Town, Japan. Sakura New Town has a new map Aobahara (reference to Akihabara), along with a NyaKB48 Theater (reference to AKB48).

Yo-kai Watch 3 will have a brand new battle system with the Tactics Medal Board. The placement of the medals on the lower screen’s board will also determine yo-kai positions in the upper screen. Players will be able to do things like make a formation, evade enemy attacks, and switch in reserve yo-kai.

Yo-kai Watch 3 will have over 600 yo-kai in total, including the new yo-kai introduced, which are American Yo-kai and Great Legend Yokai.

The new bosses in Keita’s USA part will also look very American. For example one of the bosses is a lump of garbage scraps.

And here’s a roundup of the game bonuses:

Finally, you can find the new trailer, screenshots and artwork from the game below:

A new Yu-Gi-Oh! game for 3DS, Yu-Gi-Oh! Saikyou Card Battle, has been revealed in the latest issue of Weekly Jump. The game is planned for a digital release in Japan this summer, and features brand new characters, with the player facing off against numerous rivals in card battles. The scan shows the protagonist, a character named Guide-san who helps in duels, and two rivals: Psychic Tendo and Strong 19. Tendo will use Psychic types, while Strong 19 uses monsters with high attack power.

Though it is currently only announced for Japan, Konami previously announced that they were working on a 3DS Yu-Gi-Oh! game for a worldwide release in the summer, and it seems like this might be that game.

You can find the Jump magazine scan below: 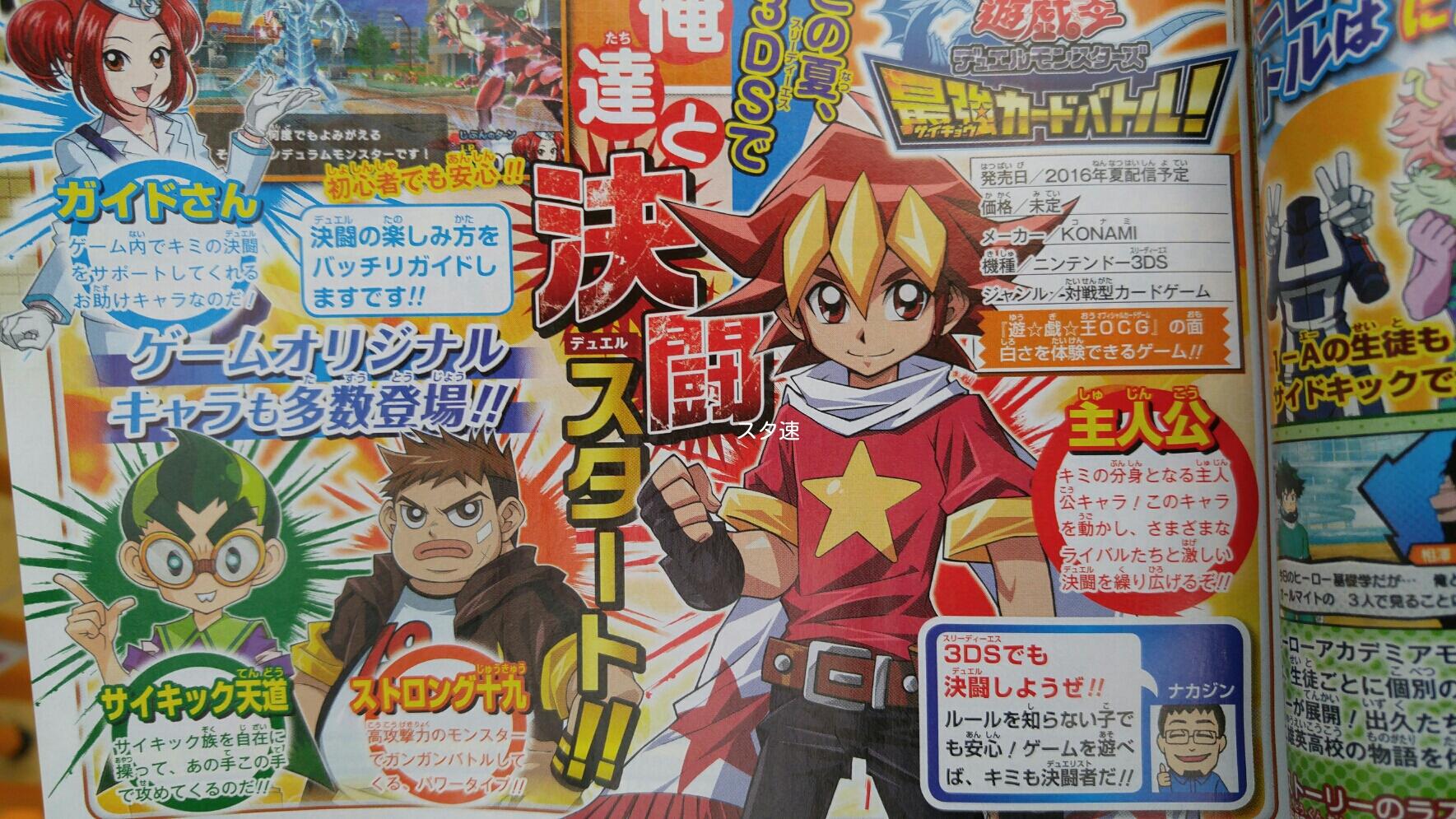 Langrisser Re:Incarnation -TENSEI- will be available starting tomorrow, so a new trailer for the game in now online. Check it out below:

Kouenji Joshi Soccer 3 was announced back in 2014, and after two years later and following a few delays, the game is finally launching in Japan on June 16 for 6,262 yen. You can take a look at the boxart below, and visit the official Japanese website over here. 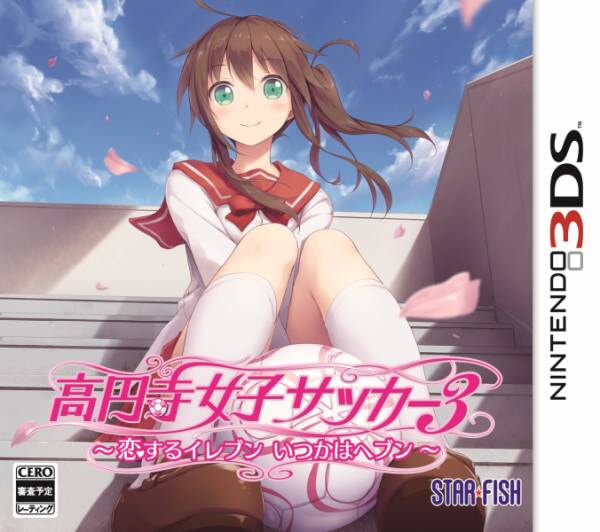 GungHo Online Engtertainment has recently published the opening movie for Puzzle & Dragons X. You can find it below:

Last year, Japan received a game by PONOS after its announcement in a Nintendo Direct called Battle Cats.

It now appears that that tower defense title will soon be available in English, since developer PONOS has recently tweeted out the following:

At long last… The Battle Cats POP! for Nintendo 3DS is coming! Battle your friends in glorious 3D! #BattleCats3DS pic.twitter.com/ils9ttxTAI

While you wait for an official announcement of a localization, you can take a look at Japanese trailer:

Nintendo recently released an official video for Final Fantasy IV Advance on the Japanese Wii U Virtual Console. Check it out below: