Nintendo of Europe finally announced today a released date Art Academy on the Wii U. The titled, named Art Academy: Atelier, launches on June 26 in Europe.

The game offers “30 comprehensive lessons” and, for the first time ever, charcoal is included as one of the tools available to be used while drawing. You will be able to upload your creations to Miiverse, as well as “display them in a virtual in-game gallery and, in another first for the Art Academy series, upload time-lapse videos of these works being created to YouTube.”

Here’s the full summary and boxart by Nintendo:

21st May 2015 – From 26th June, with Art Academy: Atelier the Wii U GamePad transforms into an artist’s canvas full of possibilities. The latest instalment in the popular educational software series offers 30 comprehensive lessons under the tutelage of a friendly master named Vince who takes you by the hand and offers information on concepts, theory and techniques. Artworks can be created from a wide variety of materials and tools, including charcoal for the first time in the series. The user can import and export images using an SD card, share their works via Miiverse, display them in a virtual in-game gallery and, in another first for the Art Academy series, upload time-lapse videos of their works being created to YouTube.

The Art Academy titles teach people drawing and painting skills on a touch screen that transfer to the real world – just follow the easy steps and create stunning masterpieces you might never have believed possible. Following the release of Wii U Download Software Art Academy: SketchPad – which offered budding artists a taster of the full experience – this new instalment offers a fully comprehensive drawing and painting package, with the stylus once again acting as your art material or tool and the Wii U GamePad touch screen as your canvas. By utilising the touch screen’s large surface as well as the ability to zoom in on specific areas of the touch screen, you can create highly detailed works. Gain inspiration from some of the artworks already created and shared by some Wii U users in the Art Academy: SketchPad Community on Miiverse.

Art Academy: Atelier offers a fun and interactive course of study called Lessons Mode where you follow step-by-step tutorials to learn drawing and painting techniques. The techniques handed down from your master Vince are categorised into groups called Beginner, Advanced and – a new category for Art Academy: Atelier – Tools, with the Lessons in each category increasing in complexity as you progress. By completing Lessons, you will become familiar with the reasoning behind the techniques and learn more about the masters of the craft. Of course the software can also be used to draw or paint freely thanks to the wide variety of available materials and tools.

Whether you have created fun doodles, work-in-progress artworks or finished masterpieces, you can show off your creative process by uploading a time-lapse video of the creation of your artworks to YouTube. Whether you set it to one, two or five minutes in length, the time-lapse video shows the process of creation from the first brush stroke to the last. You can also save your creations to an SD card to view on a computer, as well as view your work in a virtual Gallery. The Gallery also includes the Family Wall, where all household members linked to the same Wii U console can contribute their artistic touch to the same canvas.

You can share your creations via Miiverse, Nintendo’s network service that brings together like-minded communities from all over the world. Artwork created by others is sorted using predefined tags for easy searches and can be viewed without leaving the software. It can also be saved to the software or to an SD card for future use as a reference for your own work. What’s more it’s just a single button press away to access the Art Academy: Atelier Community online. 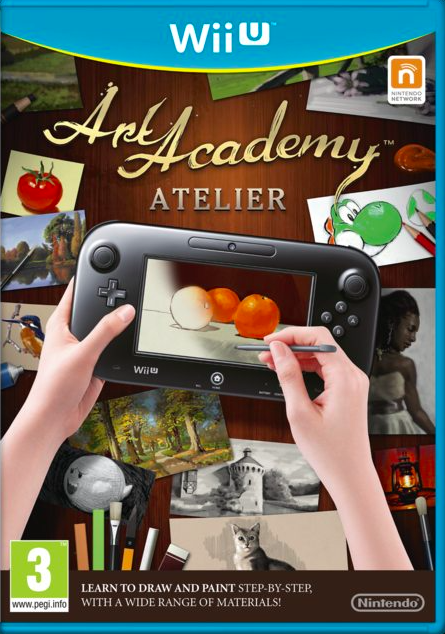