After presenting us with a new trailer a few days ago, Bandai Namco has now given us another sneak peek at the game using the demo:

Due to this system, you can choose to go with three fighter characters without any assists, or go with one fighter and four assists, for example. That said, it’ll be up to you to decide whether you’d like to have more characters with their own health, or have more moves from helping assist characters.

During battle, the commands are rather simple. For example, you can press the Y button to do a light attack and keep pressing it repeatedly to connect into a combo. The A button lets you shoot energy attacks and the X button is used for heavy hits. You can change between characters by touching the bottom screen, and this switch can be used to connect combos between characters. Both fighters and assist characters have their own delay.

At the 5:05 mark, Vegeta is shown performing a combo and linking into his Galick Gun move. While the player didn’t react to the attack in this occasion, you can return fire for an “energy beam struggle” where whoever button-mashes the most comes out as the winner. 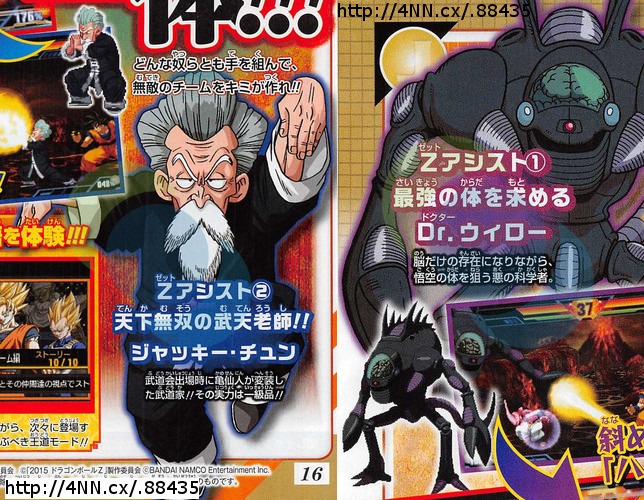 Meanwhile, the latest issue of Jump has also revealed two new assist characters for the game. These are Dr. Wheelo and Jackie Chun.

Bandai Namco has also prepared a few more screenshots for your viewing pleasure. Check them out below: