Here’s some footage from the game by Nintendo World Report:

Nintendo released a new batch of assets for Chibi-Robo! Zip Lash. You will find those below.

But before that, we have some new details about the game:

– The game starts with the disappearence of all of the Earth’s natural resources due to an invasion of small aliens;
– Chibi-Robo watches the event from a spaceship in the Earth’s orbit and decides he must take on the alien threat by himself;
– In the opening tutorial at E3, Chibi-Robo uses his outlet plug to break boxes and attach himself to walls to climb up to higher platforms;
– You collect upgrades as you progress, which will allow you to fire off your plug in more directions and have a longer cable;
– In another level, Chibi-Robo attached himself to a jetski barreling through the water, You stay afloat by collecting battery power collectibles and pressing the jump button at the perfect moment when hitting ramps;
– Chibi-Robo can run out of battery resulting in restart, but the battery power seems ample to complete a level without you having to rush.

Assistant producer Risa Tabata also explained why the game is an action-platformer:

“One of the first things Skip suggested was having Chibi-Robo throw or spin his cord instead of having it plugged into the wall. From that, we began thinking about different actions that Chibi-Robo could do to interact with a stage. Maybe he can destroy enemies with it, or throw it toward a panel to scale an insurmountable wall.”

“This wasn’t enough, though, so we decided to also have items that could change the length of Chibi-Robo’s cord. We also added the ability to perform Zip-Lashes, by which Chibi-Robo can charge up and throw his cord so that it bounces off of surfaces.”

Here’s the Facts Sheet and other assets: 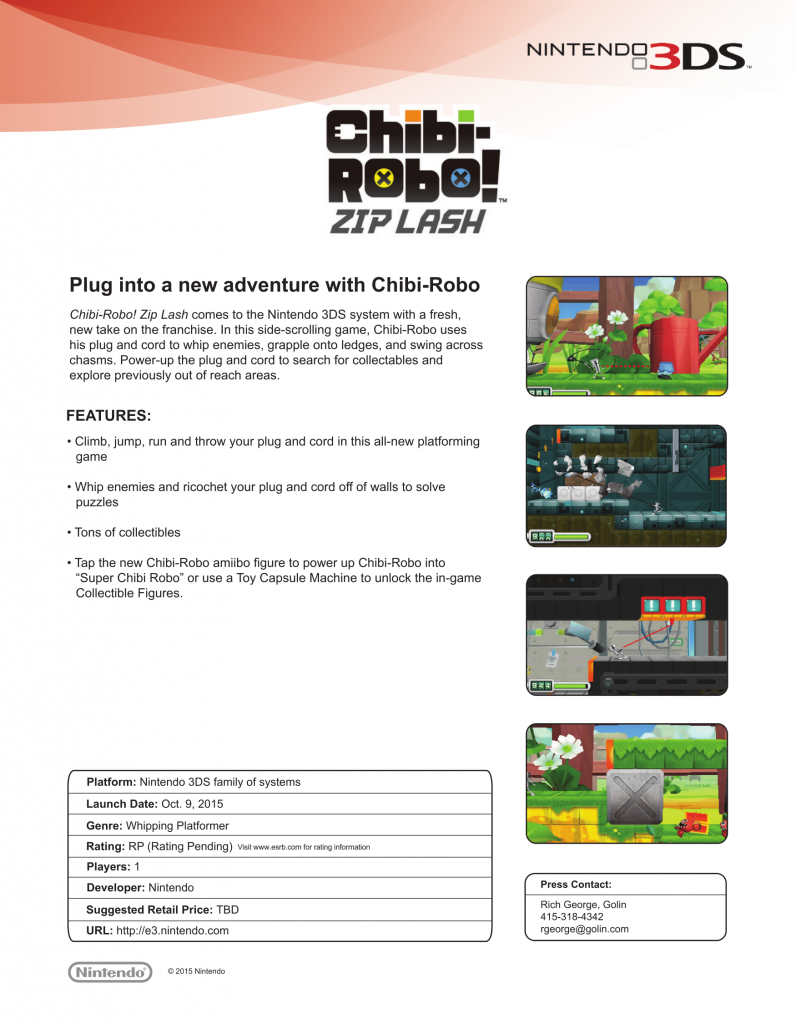