Hiromasa Shikata, the game’s director, confirmed to Kotaku that if one of the three players quits the game while playing, you will be presented with a Game Over screen, but your progress still will be saved.

Lots of new information and footage from the game has come to the surface. Keep reading below.

In the demo I tried, two players had the Gust Jar, an item that shoots a blast of wind, while one player had bombs.

– 2 players have the Gust Jar;
– 1 player has bombs;
– Gust Jar shoots wind;
– Trio of Links split up;
– One player needs to use the Gust Jar to send two of the Links over a pit;
– Link with the other Gust Jar can send the player carrying bombs over another gap;
– With all three players separated by bottomless pits, the player with bombs can use their item to hit a switch which eventually opens paths for the two other players to move forward;
– Later on, the 3 Links need to step on a platform that moves when a Link used the Gust Jar like a rocket engine;
– Each time the Gust Jar was used, the platform would go forward a little bit;
– Links with the Gust Jar need to move the platform in a spot for the bomb player to toss a bomb to hit a switch;
– Still on the platform, all three Links had to trip another distant switch with a bomb;
– With the second switch, need a 3 Link totem;
– Bomb player goes on top;
– Boss battle has players battle two bomb throwing enemies;
– These monsters are protected by a pit so you can’t slash at them with your sword;
– The Links with the Gust Jar need to use their item to blow bombs back to the monsters;

Details from the The Verge Interview with Hiromasa Shikata:

In a lot of multiplayer games there are a lot of people, but they’re not really playing together, That was the main focus — building a multiplayer game that requires cooperation At its heart, Four Swords was kind of a party game.

On how you can use the touch screen to send pre-selected Link messages with emotions:

It’s actually creating a new form of communication. I believe it might be a little bit stressful for players to try to figure out how to communicate what they want to do, but I think that because of that feeling, when you’re able to do it successfully there’s a level of satisfaction that you don’t find in other games.

More information about The Legend of Zelda: Triforce Heroes has now been released thanks to some interiews.

– Zelda dress offers the appearance of more hearts;
– Another outfit is fashioned like a wearable bomb;
– One puzzle requires the three Links to form the totem and fire an arrow through a tall flame to light an out-of-reach unlit torch;
– Need to make sure the right person goes on top and only the person on the bottom can toss everyone back down;
– If you’re on top or in the middle, you are at the whim of the lowest man in the totem;
– Margoma boss: get a bomb thrower on top of the totem to throw a bomb at its eye;
– Once this is done, you need to switch out the totem to get an archer on top to fire arrows at the beast eyeballs;
– Share hearts in the game;
– Touch the icon of the other players on the lower screen to see exactly where they are;
– Use emoticon-style icons to communicate and cheer on your friends;
– In single-player, you can have two AI Links.

During yesterday’s Treehouse Live we learned that the game has online play but no voice chat.

We also learned that both a Challenge mode and Arena mode will be included in the game.

“In the Coliseum, you’re fighting in a limited space. It’s an enclosed environment and items are placed around that you can pick up to increase your chances of winning. In some of the stages, the terrain will transform.”

– Inflict the most damage on your opponent as possible;
– Once the time is up, the player that has received the least amount of damage will win that battle;
– Collect material to make outfits in Zelda: Tri Force Heroes;
– The outfits provide the player with enhanced abilities;
– Ex: an enhanced spin attack or bigger bombs;
– Shikata said that high-level materials are necessary to make the best gear, but the ones you find in PVP have a distinct advantage;

“There are materials that you can only get by competing in the Coliseum. Those material allow you to make clothes that are highly beneficial to competing.”

The story takes place in a world that is not Hyrule. It’s a kingdom that is sort of fashion-obsessed and in that kingdom, an event happens involving the princess of the kingdom –

On whether the princess is Zelda:

No. The king, of course, wants to solve this problem so he puts a general call out to the kingdom for heroes to assemble, and who answers the call, but Link and that’s the beginning of your adventure.

On where it fits into the Zelda timeline:

That’s a tough question. The Zelda timeline is “complicated” and if you look at the history of Zelda you will see there are three branches. I can’t really designate which one of those branches we’re looking at, but as far as the design itself, we looked to Link Between Worlds. But it’s not – as far as a timeframe – it’s not before or after. We haven’t really settled on that.

On whether it takes place in the same universe as a Link Between Worlds:

With the history of Zelda we have these three parallel worlds. I can’t say which one it’s on/in at this point.

– Play along two paper dolls called “dopples” in single-player;
– Can’t play the game as two players and bring along a single paper doll dopple;
– It’s either 3-player co-op or single-player;
– If you want to play with only one other player, you can duke it out in the game’s coliseum mode;
– Again, Download Play supported.

– Vote on a level to play;
– Votes are randomly selected;
– Each dungeon is structured into four main sections;
– One dungeon: forest;
– In the forest stage, the group is separated;
– Start out by finding each other;
– Reach a floating balloon with the key to the next area by forming a totem;
– Walk up to a Link and press “A” to hoist them up on your shoulders;
– The top Link in a Totem can interact with off-the-ground elements;
– Second section of the dungeon has a room full of ChuChus;
– Bow assigned to “Y”;
– Third area has a puzzle;
– Need to activate 3 switches on high pillars guarded by enemies and surrounded by a dark abyss and moving platforms;
– Switches snap shut if you get too close;
– Solve the puzzle by forming a totem formation with the bottom Link walking and aiming, the top Link firing an arrow at the right time, and the middle Link providing crucial height;
– Fourth area has an enormous electrified ChuChu;
– ChuChu is a see-through yellow blob with a red weak spot inside;
– The boss sends steady streams of electricity out from four sides;
– Hit it with arrows, and the boss will bring its weak spot up off the ground;
– Form a totem two-high for the next hit, and three-high for the eventual third;
– Send out 8 messages on the touch screen via different images;
– Some of the available images help with practical concerns, like the Totem request or Throw suggestion, while others are more for fun.

Here’s the Facts Sheet with some details on the game: 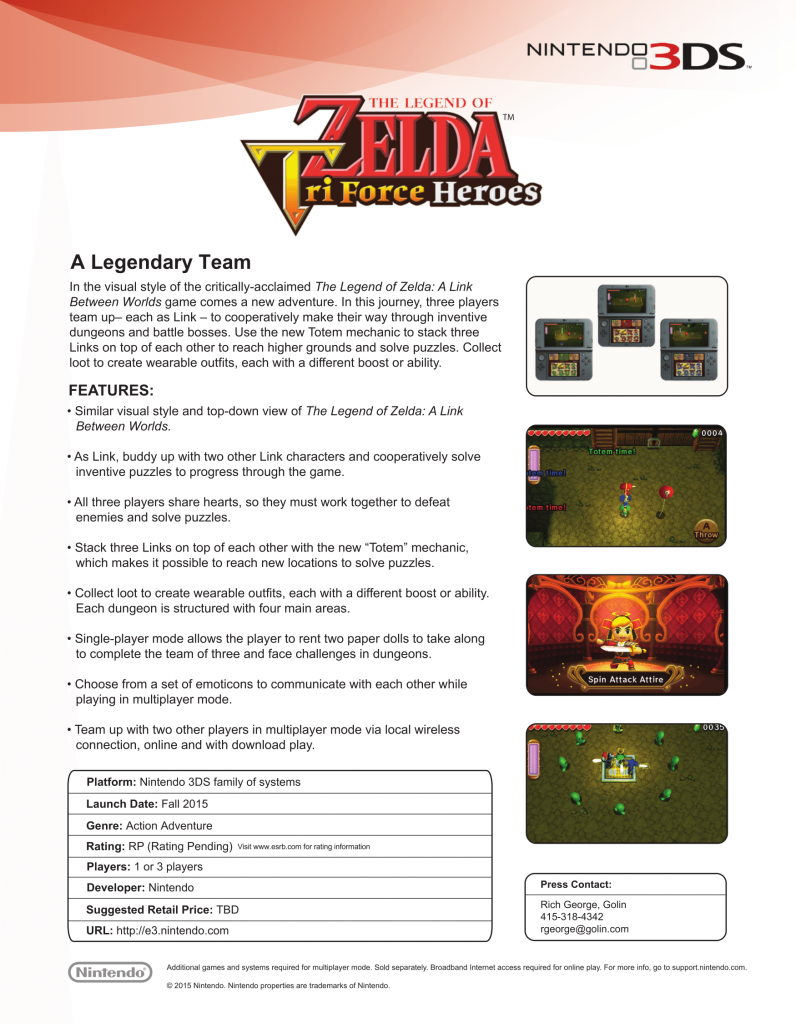 And here’s the trailer, followed by a gallery containing some artwork and screenshots: