A new Minecraft update, version 1.8.8, was released on December 18 on most consoles. It adds new items, blocks, mocks, biomes and plenty of other features. The patch is said to be the “biggest update ever, bringing the console versions closer to the current PC build than they’ve ever been before#. However, Mojang says that it won’t be hitting Wii U “until some time next year”. You can still find a trailer showing the game’s 1.8.8. version update for consoles below, followed by some footage of the Wii U version of Minecraft.

Here’s a roundup of the details:

– The silver-haired protagonist is on a journey to recover his memories;
– He is a monster master and can trigger the “Scout Attacks” thanks to this;
– Scout Attack: a skill in which his monster companions make use of his power to unleash a special attack at the opponent. If it’s a success, you can recruit the enemy monster as an ally;
– A gauge on the screen shows your scouting success rate. Even at a small percentage, it’s possible to scout a monster;
– A new “Strategy” command is available in battle. When you choose this you have a total of six options, such as “Accumulate Tension” or “Use Special Skills”;
– If your “Tension” is accumulated, your attack will be more powerful, and the scout gauge will rise more easily.

– As you battle with your monsters, they will continue to level up, which will increase their attack power and other statuses;
– Each race of monster also has a variety of skills. You allocate skill points to learn these special skills and spells;
– Examples include: “Dragon Kid” has the skills “Drago Force” and “Speed +1”. If you allocate your skill points to Drago Force, you’ll learn a powerful breath attack. However, if you allocate your skill points to Speed +1, you’ll be able to attack enemies more quickly;
– You can have two of the same monsters raised in completely different manners from each other.

In addition to all of this, Square Enix debuted Dragon Quest Monster: Joker 3’s final official package shot at Jump Festa 2016 and a first trailer for the tittle too. The image, drawn by Dragon Ball creator and Dragon Quest character designer Akira Toriyama, can be found below, followed by the debut trailer and a new batch of screenshots. 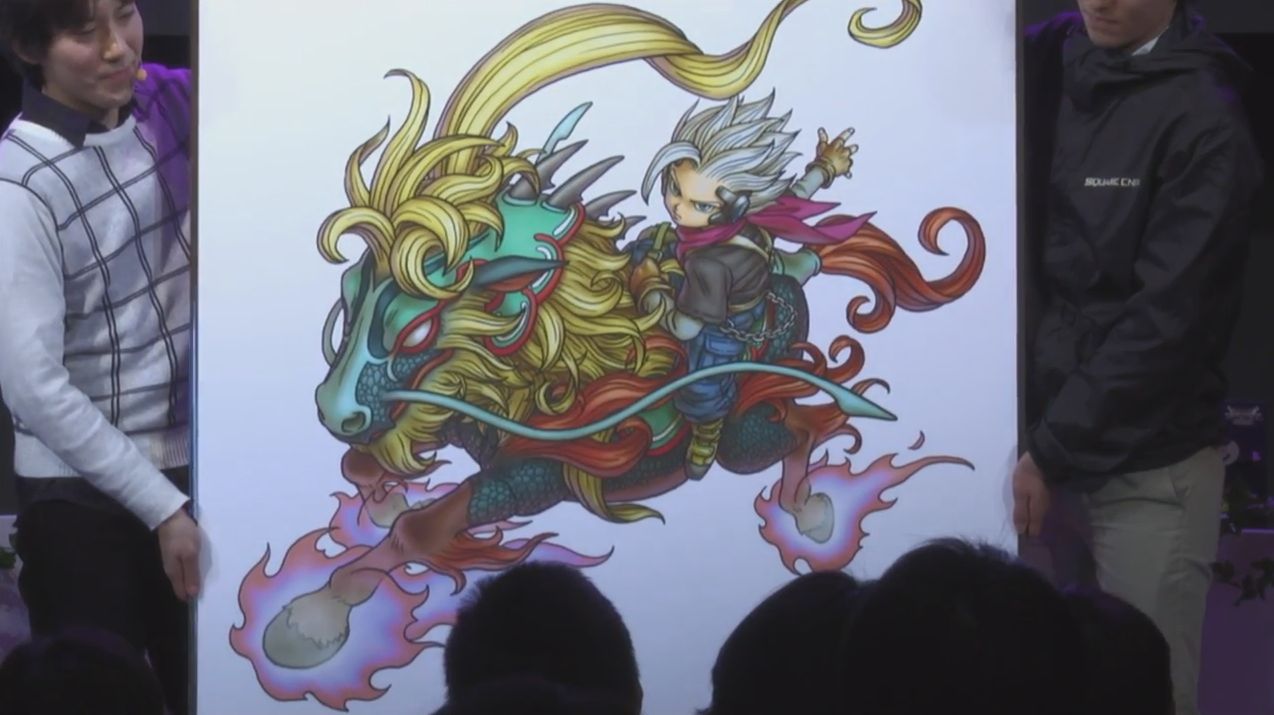 Square Enix recently uploaded a new trailer for Final Fantasy Explorers, this time showcasing the game’s multiplayer aspects. Check it out below:

Like in the manga, players become students of Class 3-E in the game. They’ll be spending time in school from entrance to graduation while attending school events, trying to kill Koro-sensei, and taking tests. It’ll be possible to train with Nagisa Shiota, take on missions with Karma Akabane, and enjoy communication among classmates.

A few details about Ace Attorney 6 were shared by Capcom at Jump Festa 2016.

First, it seems like Athena Cykes will be returning in this game. She previously appeared in Phoenix Wright: Ace Attorney – Dual Destinies. Also shown in a demo at Jump Festa, is that free investigations from previous titles will be possible.

Also recently confirmed was the studio and voice cast behind the upcoming Ace Attorney anime. 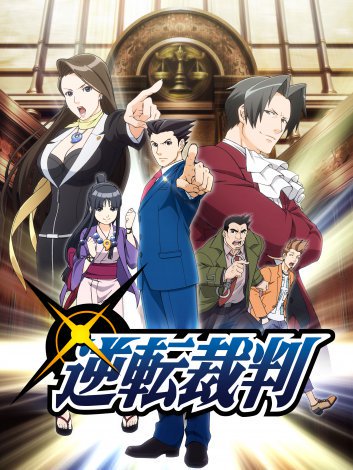 A-1 Pictures (known for Fairy Tail, Sword Art Online, and lots more) is the studio handling the Ace Attorney anime. Ayumu Watanabe is directing and Kaoru Wada is composing.

The Ace Attorney anime will air on Saturdays via YTV starting in April 2016.

A new trailer for SEGA 3D Reprint Archives 2 is now out and curiously the video itself actually supports anaglyph 3D. check it out below:

Announced earlier this year, Yo-kai Sangokushi is the latest Yo-kai Watch spin-off / crossover title and Level-5 recently revealed that the crossover between Yo-kai Watch and Romance of the Three Kingdoms will be released for Nintendo 3DS in Japan in 2016 for 4,600 yen. 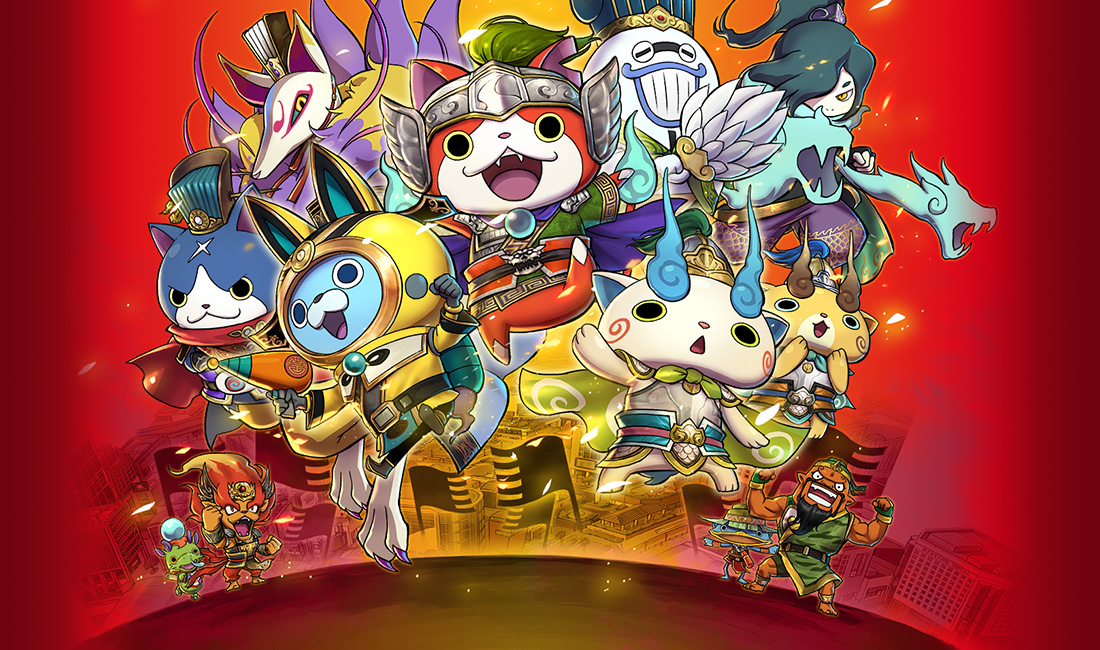 The game will be playable for the first time at World Hobby Fair Winter 2016, which will take place in Tokyo on December 23 and 24, Nagoya on January 31, Osaka on February 7, and Fukuoka on February 14.

Yo-kai Sangokushi puts the yo-kai of Yo-kai Watch in the roles of military commanders, who must fight for the unification of “Sakura Country”. Over 400 yo-kai will appear in the game, including:

Doraemon: Nobita and the Birth of Japan

FuRyu is working on another Japanese Doraemon game for 3DS, called Doraemon: Nobita and the Birth of Japan. It is based on the upcoming movie of the same name and is slated for release on March 3. 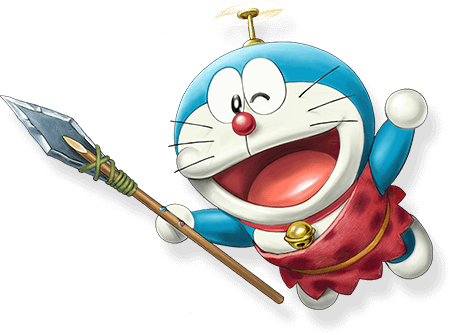 Doraemon: Nobita and the Birth of Japan is a “Primeval Life Adventure”. The single-player game lets players take control of five characters: Doraemon, Nobita, Gian, Suneo and Shizuka. Adventuring in the world of 7,0000 years ago, using Doraemon’s secret tools, you can fight against enemies and wild beasts, cook, and decorate your room. Appearances of the antagonist “Immortal Spirit King” Gigazombie, as well as the “Great Spirit King” Dorazombie are also confirmed.

You can find a few screenshots in the gallery below:

Food Wars: Shokugeki no Soma: The Dish of Friendship and Bonds

Furyu’s Food Wars: Shokugeki no Soma: The Dish of Friendship and Bonds recently debuted in Japan, so you can find some footage of the game below:

Mixi has once again released a new commercial and a batch of screenshots for Monster Strike. Check them out below:

Rocket Company recently shared a new commercial for Medabots 9.Check it out below:

Aksys Games has pinned down a release date for Langrisser Re:Incarnation Tensei. The game will not only be released in North America, but also digitally in Europe and Asia on April 19.

Deep Silver and Comcept have shared a new batch of screenshots from Mighty No. 9. Give them a look in the gallery below:

Natsume recently shared another developer diary post and the first official gameplay video from Harvest Moon: Seeds of Memories. Although it’s from the iOS build, the footage might give us an idea of what to expect from the Wii U version.You can find both below:

Hello, everyone! This is Taka, the producer of Harvest Moon: Seeds of Memories, a new Harvest Moon game coming to iOS soon as well as Android, Wii U, and PC in 2016. We know fans were very excited by our reveal of our first screenshots for the mobile versions, and we’re excited to bring you a new treat today. To show you how Harvest Moon: Seeds of Memories looks in action, we’ve made a little video for you of the iOS version.
But let me step aside and have Mike (that is what I named him, but you can name your character whatever you want) take over…
—–

Hey there, everyone! Mike here! I thought it might be cool to show you my average day here in Chestnut Town, so let’s get right to it.

I start the day off by taking care of my pets. I have two: a bobcat and a dog. I still dunno how I was able to train that bobcat, but hey, it hasn’t tried to eat me yet! I make sure to feed them both before I leave for the day.

After leaving the house, it’s time to take care of my crops! Luckily, Brutus has upgraded several of my tools, so watering is a cinch! It looks like there’s some spinach that’s ready to be harvested today. Perfect timing! I also take this time to clear my land of any stray rocks or weeds that may have popped up overnight.

Next, it’s time to take care of my animals. First, I clean up the barn using my pitchfork. I can use the compost I clean up as fertilizer, though, so it’s not as bad as you might think. Some of my animals need cleaning as well, so I take the time to do that too. Normally, I would also milk and sheer any animals that need it, but it doesn’t seem like they do today. Naturally, before I leave, I make sure to leave feed in their feedbox, as they’re quite hungry in the morning!

After that, it’s off to my chicken coop. Just like my barn, I clean it up using my pitchfork. You might not think it to look at them, but chickens need to be loved and held, so I take the time to do that before gathering the eggs they’ve laid. Just like the animals in my barn, my chickens are hungry in the morning, so I feed them before I leave.

Next, it’s off to the mountain to see the girl I’ve got my eye on, Andrea! She’s an ore researcher, but also likes to relax at the bar after work. My kinda gal! In any case, I make it a point to talk to her every day, as well as give her a gift. I still haven’t confessed my feelings to her, so get kinda nervous when I talk to her these days…

While I’m at the mountain, I figure I should get in some fishing for the day. Let’s see what I can catch today… A crucian carp? Not bad. And a pretty big one, too!

Now it’s time to head to Chestnut Town. I want to sell Sam some broccoli, so I talk to him first. Boy, that Sam sure has a unique way of talking! At first, it was a bit difficult to understand what he was saying to me, but now I gots it down, capisce?

Next, it’s off to Iris’ Flower Shop to pick up some flower seeds. I’ve had my eye on these white rose seeds for a while, so let me get…let’s see, how about 15 of them? Oh no! My bag is full! But that’s OK! The seeds I just bought were sent directly to the storage in my house, so I can just take them out from there when I get home.

After that, I think I’ll stop by Hanna’s Restaurant to say “hi” to Hanna and her daughter, Emily. Hanna’s food is amazing! I’ve bought some of her recipes so I can cook her dishes at home. Anyway, her daughter Emily is great, too. She’s a bit too hyper for my tastes as far as romance goes, but some people like that in a girl. She’s a great friend, though!

Finally, it’s off to bed for the day. *Whew*! I’m exhausted! Farmwork starts early in the morning, so it’s best to get to bed around 10 PM or so. And who knows what tomorrow may bring? I need to be prepared for anything!