Source Gaming has once again translated the latest Famitsu columns by Masahiro Sakurai, and you can find 495 here and 496 here.

The first one was written before the final presentation and Sakurai talks about the matter of criticism and how difficult it is too please everyone, in is case, when choosing and adding characters. The second one goes over the three last characters that are being added to the game, Cloud, Corrin and Bayonetta, and why they were chosen over others, basically, what makes them unique. It is also mentioned that the ballot collected approximately 1.8 million votes worldwide. Overall, both articles should prove an interesting read if you are interested in Smash Bros. and its development, so give them a go.

Another new weapon has been added to Splatoon, the Rapid Blaster Pro Deco, which is a variant of the standard Rapid Blaster Pro, with the Disruptor and Killer Wail sub and special weapons instead. You can find some screenshots and an overview of it below:

If you haven’t played much Splatoon so far, you might want to watch the Super Play Time series to learn some basic tips from Nintendo’s JC. You can find the first two episodes below:

Next, we have the results of the 9th Japanese Splatfest, which you can find below: 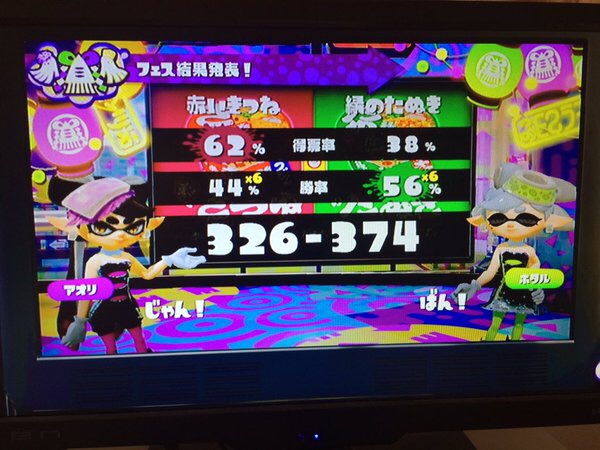 Additionally, Europe’s 9th Splatfest has now been confirmed for next weekend, and will begin on January 1 at 6 PM in the UK / 7 PM in Europe. The Splatfest topic asks players if they’d rather be fit or rich. 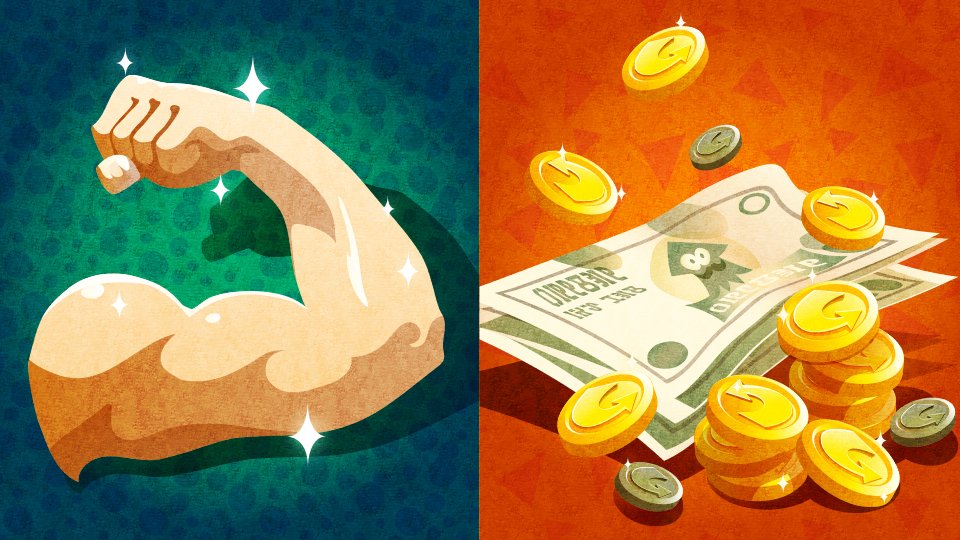 Finally, this week’s issue of Famitsu featured another a 4-page interview with Splatoon’s developers. The magazine caught up with producer Hisashi Nogami plus co-directors Tsubasa Sakaguchi and Yusuke Amano. They discussed some interesting topics, like background information on the development of certain stages and the end of updates and why they’re coming to a close, among others. You can find a translaiton of the interview at Nintendo Everything, over here.

Three new Mystery Mushroom costumes are coming to Super Mario Maker, and like previous ones you will need to beat an Event Course to get them. Captain Toad is now available since December 25th and Birdo and Excitebike will be available on December 31st. You can find an overview of the Captain Toad course below, followed by a trailer for the costume.

“Search every angle in a puzzling adventure! In Captain Toad: Treasure Tracker, the Toad Brigade’s lovable Captain explores a variety of miniature Mario courses. And now he’s tackling a real Mario course in search of shiny golden coins! Usually Captain Toad can’t jump with his heavy backpack – can you clear this course without jumping?”

Nintendo of Europe also recently posted a new video in which Takashi Tezuka and Shigeru Miyamoto play Super Mario Maker. Tezuka makes a course, and then Miyamoto tries to complete it, but not with its share of course restructuring as you can see below.

Finally, Bloomberg published a new article about how Nintendo has been reinventing Mario to better suit the current times, featuring some brief comments from Nintendo developer and Super Mario Maker producer Takashi Tezuka. You can go give it a look, over here.

Another new patch is now available for The Legend of Zelda: Tri Force Heroes, bringing the game up to version 2.1.0, which mainly features the introduction of hero points. The patch takes 1,108 blocks of space, amounting to roughly 138.5MB. You can find the full patch notes below:

Additionally, Nintendo Everything translated an interview that came with last month’s issue of Nintendo Dream which is centered around the costumes found in The Legend of Zelda: Tri Force Heroes. The Japanese magazine spoke with director Hiromasa Shikata, designer Keisuke Umeda and producer Eiji Aonuma about some of the interesting costume designs and even shared several pieces of concept art from the game. You can check it out over here if you are interested in learning more about the game’s development.

Dark Horse has teamed up with Nintendo to release a new art book in North America, The Art of Fire Emblem Awakening, which will be available in August 2016.

Here’s the official overview of the book:

The Art of Fire Emblem Awakening contains an in-depth, behind-the-scenes look at the smash-hit 3DS game, from beautifully illustrated renditions of your favorite characters, to storyboards for in-game events, character designs, weapon designs, character profiles, and the entirety of the script with every possible branch of dialogue! Relive some of the most poignant moments of the game, or see what might have been if you had made different in-game decisions with the Art of Fire Emblem Awakening!

The Art of Fire Emblem: Awakening is due out in comic shops on August 17 and in bookstores on August 30. You can also pre-order it on Amazon.

IGN has recently released a couple of videos taking a look at the first moments of Fire Emblem Fates and the My Castle functionality within the game, including the use of amiibo. You can give both videos a look below:

With the recent release of Genei Ibun Roku #FE in Japan, some video footage of the game has now shown up online. Below, you can find two videos showing mostly cutscenes and a last one comparing the loading times of the physical and digital releases of the game.

According to a notice on HORI’s website for the Pokkén Tournament Pro Pad Limited Edition Controller the Wii U version of Pokkén Tournament will have local multiplayer. However, one of the players has to use the GamePad as their controller perspective while the other uses the TV screen as their perspective. Two of the HORI controllers can’t be used at the same time in local multiplayer. You can find some package shots of the controller in the gallery below:

You can also find a gameplay video featuring Sceptile below:

Below you can find some trailers for recent Virtual Console releases on the eShop.

The Legend of Zelda: Ocarina of Time (Japan, N64)

The final video in the Game of the Year series of Nintendo Minute is now out. Kit and Krysta, along with MatPat “The Game Theorist”, Lamarr Wilson and Jirard “The Completionist”, present their picks for 2015 and fan categories. Check it out below:

On Christmas day Nintendo updated its investors site with a new message from company president Tatsumi Kimishima. In it, Kimishima touches on the plans to make further use of Nintendo IP. He also briefly brings up the NX and smart devices, among other things. You can read the full message below.

Since the launch of the Family Computer System (called Nintendo Entertainment System outside Japan) in 1983, Nintendo has been offering the world unique and original entertainment products under the development concept of hardware and software integration. In the field of home entertainment, the video game industry is one of the few industries established in Japan that spread around the world, and Nintendo has established itself as a well-known brand truly representing video game culture throughout the world.

With the belief in our mission to put smiles on people’s faces around the world through products and services, we have followed our basic strategy of expanding the gaming population by offering products that can be enjoyed by everyone regardless of age, gender or gaming experience. We now want to take this mission a step further by increasing the number of people who have access to Nintendo’s intellectual property (Nintendo IP).

We are actively offering Nintendo IP in a variety of different ways so that not only current players of our video games but all consumers – including those who used to play but currently do not and even those who have never played our video games before – will also come in contact with Nintendo IP.

For our dedicated video game platform business, Nintendo is currently developing a gaming platform codenamed “NX” with a brand-new concept and our unique software-led hardware-software integrated business will continue to constitute the core business for Nintendo. For the purpose of maximizing the population that interact with Nintendo IP, we will also enter into the smart device gaming business and aim to generate revenue and profit from it as well as to create synergy with the dedicated video game platform business.

As for other initiatives to use Nintendo IP actively, we launched a new product called amiibo – Nintendo characters that come in figure or card form that work with our video games. They have been well received by many of our consumers. Furthermore, our endeavors will not be limited to video games. We are planning to offer new attractions at theme parks by using Nintendo characters. We will also strive to further increase opportunities for consumers to come in contact with Nintendo characters in their daily lives, such as through visual content and merchandising.

Thus, we are now expanding how we leverage Nintendo IP in various ways beyond our traditional use of them predominantly within the dedicated video game platform business. Furthermore, in our attempt to establish a sustainable and continual relationship with our consumers, we are creating a new membership service called “My Nintendo” and a new account system, which should work as a bridge between our dedicated video game platforms and other devices, or even environments where our consumers can get in touch with Nintendo IP and, thus, will work as a mechanism to maximize the number of people that interact with Nintendo IP.

Nintendo will continue to flexibly transform itself by adapting to changing times while constantly valuing the spirit of originality based on the belief that the “true value of entertainment lies in its uniqueness” – and will continue to provide products and services that people will be surprised and delighted by.

Nintendo intends to make progress with the support and encouragement of its shareholders and investors. 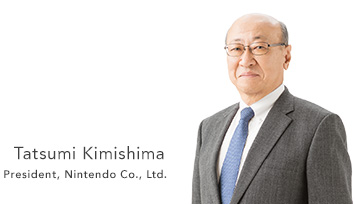 The Wall Street Journal recently interviewed DeNA president Isao Moriyasu. Much of the discussion pertained to Miitomo and the partnership with Nintendo. Moriyasu talked about the user experience and how it’ll separate itself from other social networking/messaging services, among other things. You can read the interview over here.

Mr. Kimishima’s message really makes me excited for the future, even though it’s the typical public relations press release. Maybe it’s just because he mentioned the theme park attractions; and I’m really excited for that. Although, seems like another 3-5 years before anything is physically started on that front.
The increased leverage-ing of IP has already been present, as we both know, since we’ve mentioned the new Mario products within the past weeks and I really love the last paragraph: ^ _ ^

“Nintendo will continue to flexibly transform itself by adapting to changing times while constantly valuing the spirit of originality based on the belief that the “true value of entertainment lies in its uniqueness” – and will continue to provide products and services that people will be surprised and delighted by.”