Note: This post contains some extra news from the week before the one it is dedicated to because I didn’t post anything that week. I only included the most relevant stuff from then though.

Below you can find more gameplay footage from the game:

Below, you can find the launch trailer for the game, some gameplay footage, and the latest episode of the Engine Room video series, where the developers go over some of the gameplay basics of SteamWorld Heist.

Shovel Knight’s latest update (version 2.1) allows for new functionality with amiibo and is now out in Europe on both the Wii U and 3DS. According to Yacht Club Games, North America will have to wait until around January 8 for the patch and amiibo to release.

Below, you can find Shovel Knight’s version 2.1 update notes, and an instruction manual for the amiibo here.

You can also check out some of the Shovel Knight amiibo functionality in the trailer and gameplay videos that follow.

During the Nindies@Night event a few months back, amiibo support was announced for the indie game Hive Jump. Recently, Graphite Lab has shared a bit of additional information about what we should expect from the functionality during an interview with Shigeru Reviews. It was stated that you can use amiibo to unlock “custom challenges and unique treasures”. It’s a work-in-progress though, so Graphite Lab can’t share any other information just yet.

“Let me start by saying we would LOVE to have Samus in the game, but I don’t know if that is on the table. There are a lot of very good reasons why a cameo might not make sense for our game right now. We are planning on including custom challenges and unique treasures which could only be unlocked with amiibo. This feature is still in development so we’re not at a point where we can share more just yet.”

Dementium Remastered is now out in North America, so Renegade Kid developer Jools Watsham put together a couple of developer videos showcasing the remastered scenes as he plays through the game. You can check them out below:

You can also find some screenshots from the game below, in addition to an infographic featuring the different available control schemes.

The Delusions of Von Sottendorff and his Square Mind

The Delusions of Von Sottendorff and his Square Mind recently released on the 3DS eShop on December 17. You can find 4 making of videos by Delirium Studios below:

Below, you can find a trailer and a comprehensive overview for the game:

Reach directly into the world of Terraria with uniquely-tailored touchscreen controls, fashioning elaborate structures and fighting off enemies with an intuitive swipe of the stylus. Explore vast fantasy worlds by soaring up to floating islands in the sky or excavating down to the depths of the earth. Wage war on hundreds of different enemies – ranging from Zombies to Goblins to Unicorns to Wyverns – with weapons and armour you’ve crafted yourself. Build amazing structures and dwellings with ease, laying brick and stone with the responsive touch interface.

The Nintendo 3DS version of Terraria offers the ideal introduction to the franchise for the young and old player alike, and a fresh way to play for veterans of the franchise. Share the adventure with your friends, with four player sessions supported through Local Play; a safe and sociable multiplayer environment where players only engage with real-life acquaintances.

With over 1,300 crafting recipes, 150 enemies and 15 bosses to battle, players will have endless hours of fun as they literally dig to the ends of the earth, crafting amazing armor, weapons and other items with what they discover. Players will explore vast and vibrant worlds, encountering treacherous perils -including hundreds of twisted foes, magical creatures, and mighty monstrous bosses like the Eye of Cthulhu – to provide the ultimate test of the player’s combat ability. There may be a few Nintendo surprises in store, too!

An official FAQ was posted on the game’s forum after the release, discussing topics such as future title updates, the possibility of bigger worlds on New 3DS, lack of 3D and block size, among others. You can read a part of it below and find more over here.

What content is included?
Terraria 3DS includes all the content from 1.2 with the exception of Dyes which are excluded on technical grounds*. To make up for that, we’ve added Minecarts, Fishing and a few 1.3 UI options like the ability to quick stack to a chest. The 3DS version also features a completely overhauled interface, making full use of the two screens. You can cycle the bottom screen between an intuitive touch to build interface; a world map; or as a quick-select inventory bar. It’s the most intuitive Terraria has ever been on console, and we’ve included a few surprises for the Nintendo fanbase.

Will there be variable world sizes?
At launch, there is a single world size of 1750×900. You can save up to three Worlds and three Characters per console. This is as large as the original 3DS can handle. We are investigating the possibility of introducing larger worlds as a New 3DS-exclusive feature in future, but for launch we felt it was important to start everyone off on a level playing field.

Any other technical stuff I should be aware of?
This game plays in 2D ONLY. This is for a couple of reasons: the way the graphics layers work on 3DS was not conducive to a really exciting 3D effect; and the technical overheard required to run the game in 3D would have meant compromises in terms of world size and other gameplay-damaging areas. The game runs on ALL models of 3DS (original, XL and New) and also 2DS. The framerate on original 3DS is 30fps, whereas the New gets a boost to 60FPS.

Any other New 3DS benefits?
For launch, we wanted a single version that could be enjoyed by all players. There are different control possibilities for New, but nothing that will unbalance a multiplayer game with people on an Original or 2DS.

How does multiplayer work?
Multiplayer is 1-4 players via Local Play. Each player needs to have their own copy of the game.

Will there be a demo on the eShop?
There are no plans currently to offer a demo. I encourage people to seek out the opinions of their peers – there are a handful of people on the Forum playing this already.

Will the 3DS version be updated post launch?
We are planning to support both Nintendo versions post-launch, as we have done with the console versions. Update 1 is already specced out and scheduled, and we’ll be listening for community feedback from the moment the game goes live.

Will there be cross play between the Wii U and 3DS versions?
This is not possible owing to the smaller world size on 3DS.

When will the physical/retail version launch? Wii U?
Both of these are still planned for an Early 2016 launch.

How much free space do I need to install this game?
The game itself is around 80MB, which @Spectra tells me is 640 blocks. The save game and any subsequent content updates will be saved to the SD card.

I have a technical issue or feedback – where can I provide this?
You can always leave a post on TCF, and/or we would encourage you to utilize our new Customer Service Portal: http://support.505games.com/support/home

We will be gathering any additional bugs from our ongoing play/testing as well as your experience and rolling fixes into that first Update.

*We use pixel shaders to implement dyes on the other platforms, but 3DS does not have this capability.

Cinemax’s Rytmik Ultimate is now out on the 3DS eShop. The app lets you “play with samples and musical instruments” as well as “mix them together, shape them and create music clips or tracks for your Friday night set-list”. You can find a trailer and a comprehensive overview of the title, below:

Rytmik Ultimate has taken music creation to one level higher thanks to new features. It allows you to share your songs with other users through the Rytmik Cloud. Rytmik can serve as a music player of songs uploaded on Rytmik Cloud with it and on top of that, users may exchange their songs and cooperate on their composing.

Another new feature, which is also the most desired one among fans, is exporting and saving music to a local storage. Once your work is complete, you can save it in WAV format.

That’s not all! Every instrument is now a wavetable synthesizer. With the advanced effect module you have more power to shape sounds with the ADSR envelope, vibrato, portamento, noise shaper or digital delay.

In addition to that the drawable waveform synth module allows a user to draw and modify their own wave and use it as a sample oscillator – with that you can use Rytmik Ultimate as a sonically unique chiptune synthesizer.

Rytmik Ultimate comes with a sound library of more than 750 instruments containing the libraries of the previous Rytmik series (Rytmik, Retrobits, Hiphop King and World Music) and adding a brand new set of samples ranging from deep dubstep kicks and basses to cutting synth leads and special effects.

Rytmik Ultimate with Rytmik Cloud will of course include more features and additions to the popular series to enrich your experience with playing with sounds and creating music on the go.

RCMADIAX’s Avoider and Tabletop Gallery are both coming to the North American Wii U eShop on January 7, the developer has recently announced on Twitter. 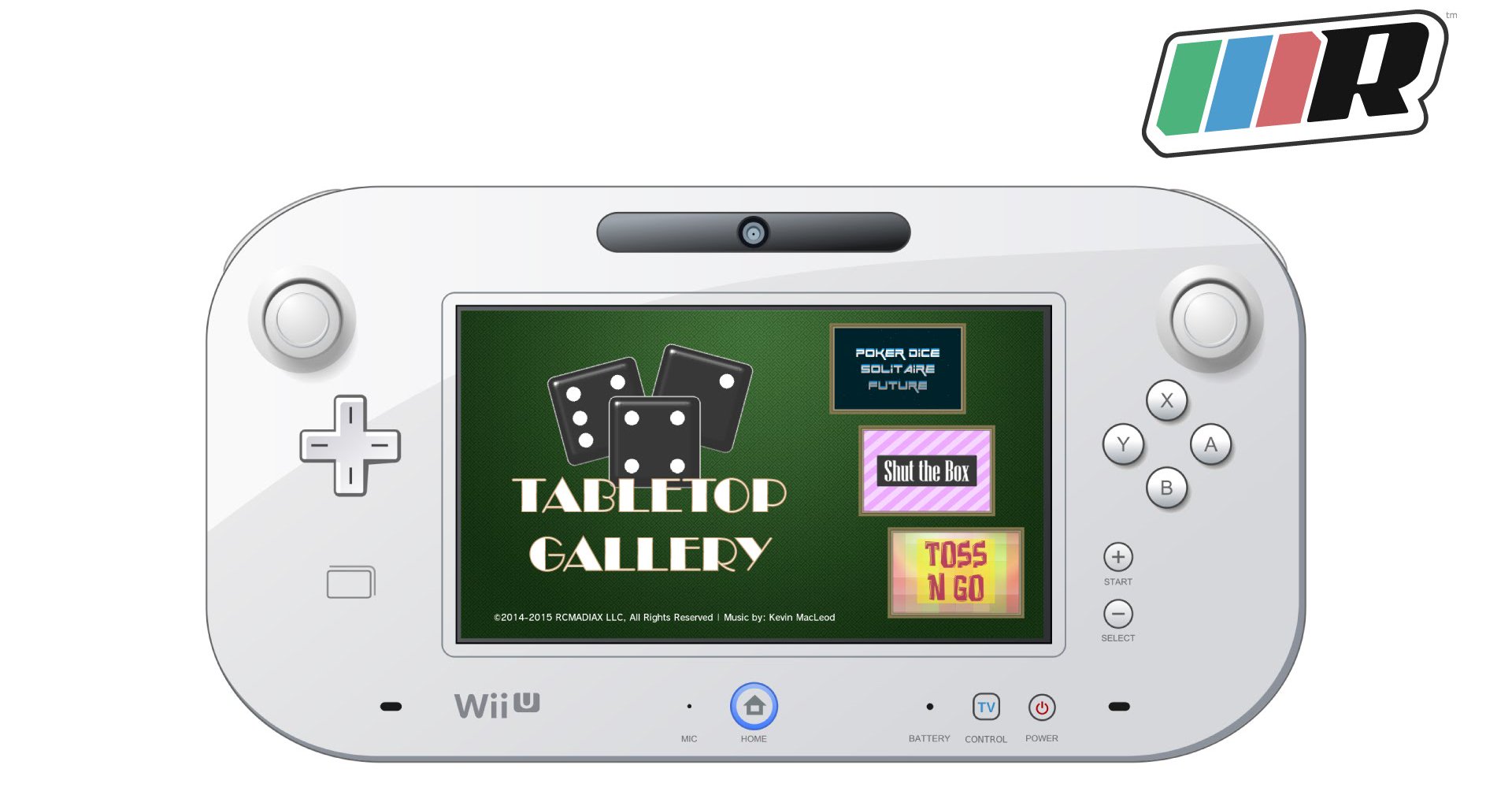 Two Tribes has provided an update on RIVE, covering the game’s release date and some other details. RIVE is now officially slated for 2016, since Two Tribes hoped to have it ready by this year but couldn’t because they are “not done yet” with development.

“Since moving to a three man team early last year we had to rediscover how to handle things with less man-power. This means a lot of tasks have to be handled sequentially, instead of spread throughout the team. If we need a new trailer, the level designs stall for two weeks. If we decide to attend PAX or EGX with a booth, the entire project is paused for several weeks. It’s frustrating, especially since it means we can’t let you play the final game yet, but it’s our current reality and we are adamant to make RIVE the absolute best game we’ve ever created.”

Remember to also check out Two Tribes’ website for a breakdown of the latest RIVE screenshots and some information about the game’s story.

FreezeME is now available on Steam, so a new trailer for the 3D platformer is out and you can watch it below. It will soon be arriving on the Wii U too.

Varia Games has uploaded a new trailer for ReVeN: XBridge to their Youtube channel. Check it out below:

Sydney Hunter and the Curse of the Mayans

Collector Vision Games recently released some new footage from Sydney Hunter and the Curse of the Mayans, which is coming to the Wii U, NES and possibly the 3DS in the future. The console version of the game is targeted for April/May of next year. Check out the footage below:

Old Moon Games recently released a new video for its Metroid-inspired indie game Ghost Song. This one focuses in an area known as Centaur Lab. Check it out below: