Square Enix has released new details and screenshots from Dragon Quest XI: In Search of Departed Time. Most these details are about the 3DS version, but naturally some will apply to the Switch version as well. Thanks to Gematsu we got a translation of the information.

The protagonist is a young man from the village of Ishi who, on the day of his 16th birthday, learns that he’s the reincarnation of the “hero” that once saved the world. He carries the burden of a major mission, and leaves his hometown in order to face his fate. He has a birthmark on his left hand, which glows in times of crisis, as a mysterious power awakens inside him.

Emma is the protagonist’s childhood friend, and was born on the same day. They both underwent their coming-of-age ceremony together on the day of their 16th birthday.

Dragon Quest XI is set in the world of Lotozetasia, where a sacred tree called “The Great Tree of Life” is said to be the source of all life in this world.

This great tree that floats in the center of the world is said to have some kind of connection to the hero and that the hero can commune with its soul.

Ishi is a small, quiet village in the corner of a valley, where the villagers worship the spirits of the earth. Mostly a town of farmers, there are few shops and other facilities here. When villagers reach the age of 16, they must undergo a coming-of-age ceremony which requires them to climb a mountain called “God’s Rock” and offer their prayers to the spirits of the earth while there.

You can find screenshots of the 3DS version below.

Meanwhile, during NHK’s Dragon Quest 30th anniversary special program, some footage of Dragon Quest XI was shown, giving us a brief look at both the 3DS and PS4 (and possibly Switch) versions. You can watch it below.

This special program revealed some new details too.

We learned that camping is in the game, since one image from the PlayStation 4 version features a “Camp Menu”. While camping players can rest (heal HP and MP), do “mysterious smithing”, pray to the statue of the goddess, and patrol the area.

One other screen shows the player being asked what they want to create, and the following options are shown:

Each item in the smithing menu also has a list of required items to create that item, a description, and a difficulty level for the creation process.

NHK’s program also showed that players will be able to ride dragons in Dragon Quest XI.

In the 3DS footage it’s also noticeable that your party members are all shown as you move throughout the world.

Some news about Dragon Quest XI’s music was also shared. Every piece in the RPG is newly written. Also, while both versions share the same music, there will be different arrangements for each platform.

Sugiyama also mentoined that he needed to finish composing everything for the original Dragon Quest in one week, and that the Dragon Quest theme was actually written in just five minutes. When asked how he felt when he heard he would only have one week to work on Dragon Quest’s music, Sugiyama said he believed he could do it.

The initial part focuses on activities that can be done by the player’s partner Nochorin. There are three new things that the players can request of Nochorin:

1. Want to take a shortcut: Nochorin will allow players to skip parts of the story, be it to the following story section or to the next boss. It’s useful for those who have already played the original Dragon Quest Monsters: Joker 3 and don’t want to waste that time.
2. Want to scout: Nochorin will scout monsters instead of the player whenever asked. It may fail when trying to scout strong monsters though. However, some monsters might only be scouted by Nochorin.
3. Want to pick up items: Nochorin can pick up items required by players. Depending on its mood, it may obtain a number of items in one go.

Next, the new Ride Combine feature is detailed. Ride Combine combines two monsters – one ridden by the player and one ridden by Nochorin – into a single stronger monster. However, it only seems to be available during battles. When combined, the player’s monster will become bigger and more powerful, and might even gain special skills and abilities that are exclusive to Ride Combine.

Examples of these exclusive skills include:

– Toumabakuenzan (Fighting Demon Explosive Fire Slash): engulfs the surrounding area in an explosive fire. The lower the user’s HP, the more damage will be dealt.
– God’s Judgment: Drops fierce thunder from above, and deals enormous physical damage to all enemies.

And examples of abilities include:

Finally, you can find several new screenshots related to this coverage in the gallery below.

Capcom has prepared a special Monster Hunter XX video in celebration of the start of 2017. Check it out below.

Level-5 is currently working on the next big update for Yo-kai Watch 3.

The company has now announced version 3.0 for the game, which will feature new versions of the Enma Daiou Yo-kai depending on the game you are playing. These are: 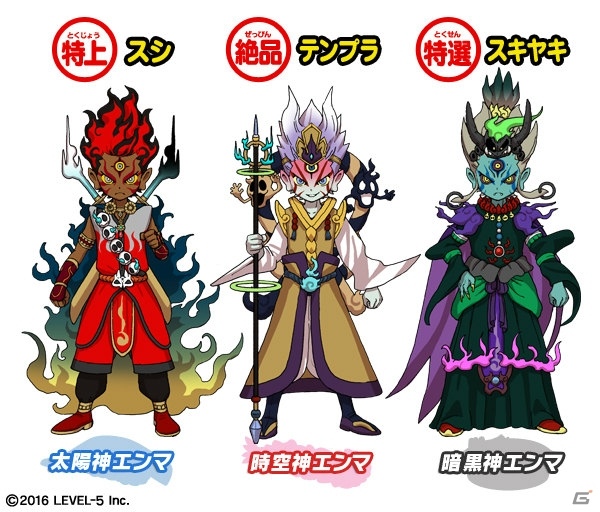 That’s all the information available at the moment, but further details will be shared in 2017. 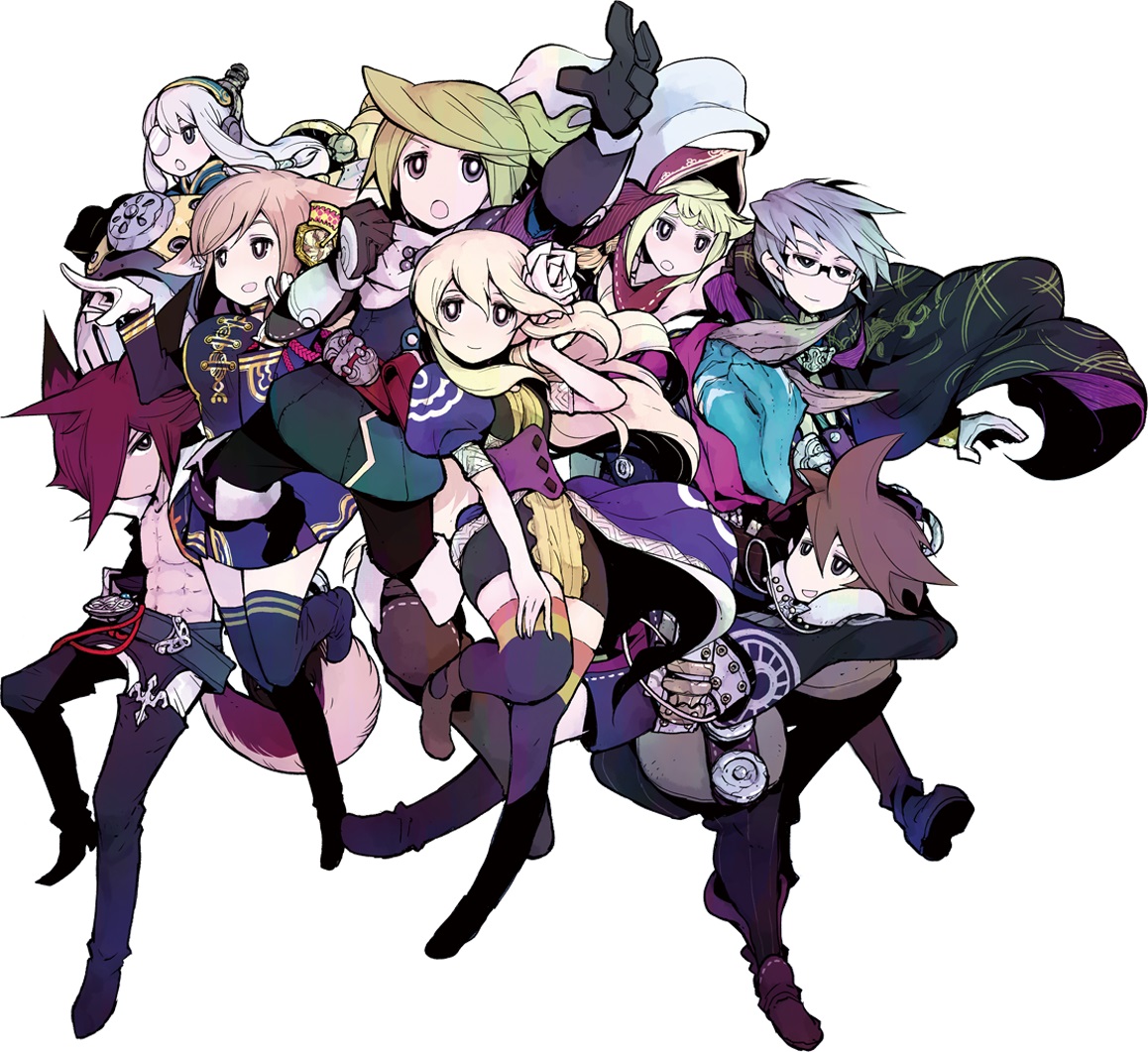 The latest issue of Famitsu featured another report on The Alliance Alive. This information batch covers various aspects about the game, including weapons and magic, among other things. Here’s the information based on Nintendo Everything‘s translation of the magazine.

Brionac is the only ark ship in this universe that can go through the Black Current to travel between worlds. It was created by an unknown civilization, and many features are included. It will become the player’s moving base after it’s obtained, allowing for destinations to be chosen as well party preparations to be made. Brionac’s bridge looks like a shrine, and each character will have their own personal room in it.

A one-man flying machine used by a certain intelligence organization. By flapping its wings during flight, the ornithopter can execute detailed corrections to its trajectory. The wings can also be folded, so it can be carried anywhere.

The machine cannot simply fly on its own however. First of all, players need to find a high place on the world map, then unfold Ornithopter’s wings, and ride to a rising air current to fly with it. The Ornithopter can only be used to glide down to places lower than the launch point.

There are seven weapon types available in the game next to Martial Arts. Each character will have two kinds of weapons at the start, but everyone can equip any kind of weapon.

– Axe: Overwhelmingly destructive power, but also very low accuracy.
– Sword: Easy to use and versatile. Has variations like short sword and curved sword.
– Staff: Low attack, but can use support techniques like lowering enemy stats.
– Bow: High attack and easy to launch an early attack, can also launch attack on all enemies. Cannot use defensive techniques.
– Great Sword: Destructive power which is useful in defense and horde battles, but low accuracy.
– Shield: Aimed for Guardians, excels in defense power. Can also be used as a weapon while parrying enemy attacks.
– Spear: Relatively easy to use, and since it has long reach, it’s easy to launch an early attack. It’s also important for horde battles.
– Martial Arts: Attack is not high, but can learn many techniques like stealing enemy stats or avoiding attacks.

Tiggy, one of the protagonists, fights with an exclusive Power Suit called Swansong. Swansong has Wind Cannon as a weapon, which can switch between three modes of Precision Shooting, High-Pressure Shooting, and High-Speed Shooting. Each mode has powerful mode-exclusive battle techniques.

There are two kinds of magic in the game, and both of them use SP.

Seal Magic is mainly used by humans, and can be bought at a certain shop in cities, but requires a specific weapon called the Creation Vessel. These Creation Vessels are mostly Staves, but they also exist as other weapon types like swords and spears. The character needs to own a number of Creation Vessels in accordance to the amount of Seal Magics they want to use.

Seal Magic includes healing magic within its list of spells. They have low power, but also use fewer SP, so their strong point is that they can be used repeatedly by the player.

The other type of magic is Demon Magic, which is used by demons and phantoms, who draw the magic on space to activate it. It’s very powerful, but also consumes a lot of SP, so it’s best used in crucial moments.

Demon Magic can be used without a Creation Vessel. The enemy demon Glossa Radan is known for using it quite often.

Each protagonist has talents marked as Qualifications, which can also be obtained by using Talent points obtained from battle rewards. There are many kinds of Qualifications, such as making it easier to trigger Awakening with certain weapons or magic, reducing SP consumption, and making it harder to be detected by enemies on the map.

Qualification for a weapon type will only apply when using that weapon type, therefore it is recommended to focus by giving qualifications for one or two weapon types for each characters.

A new Story of Seasons: Trio of Towns localization blog has now been posted on XSEED’s Tumblr. You can read it over here for details about gameplay features and translating the title into English.

Some new screenshots from the localized build have also been released which you can find in the gallery below.

– New song: Stratosphere (150 yen) – plays when Kudos is over 1,000. It’s Joule and Lola’s new song.
– Dev Recipe 4: Nebulous Clock and Scorching Journey (150 yen) can be heard when Kudos is over 1,000. Both songs are by Lumen. Equipment boosts credit and experience obtained by 150%.
– Two new score attack missions in three sets (300 yen each): Merak and Carrera, Jota and Elise, Viper and Stratos.
– Two missions with hardest difficulty in score attack (300 yen): if you clear them, something good might happen…
– New Speed Run Mode (300 yen) – included in Challenge Mode. Checks time for clearing all stages. Using Electromagnetic Barrier and saving is forbidden, and attack power will raise based on Kudos.

You can watch a trailer for the DLC content below.

This DLC is also planned for North America and Europe, and Inti Creates has confirmed it’s targeting a January released in these regions.

You can also download a New Year’s wallpaper over here.

Creeping Terror is now confirmed to drop on the Japanese 3DS eShop on January 18.

You can take a look at the game’s trailer below.

Silver Star has now released Drone Fight on the Japanese 3DS eShop. There’s currently no word on a western release of the title, but you can take a look at the trailer below to get an idea of how it plays.

Below you can find a trailer for the New 3DS Virtual Console version of Konami’s Castlevania Dracula X which is now out.