Eclipse Games will be publishing Spheroids on the European and North American Wii U eShops on January 5.

You can find an overview and trailer for Spheroids below.

“In Spheroids you take control of Lucas, a jumpy Canadian boy who sets out on an adventure with his crazy scientist companion Otto after it’s discovered that the government has been hiding alternative universes from the cubic world they live in. Unfortunately, these alternative universes contain spheres that wish to turn everything round, so it’s up to Lucas to save the world from these dangerous aliens: the Spheroids.

Throughout Spheroids’ 32 levels, you’ll encounter many different environments, with multiple hazards to avoid and enemies to destroy. Items such as the “Modified Drilling Hoo”k Otto lends Lucas will help you traverse the environment with ease, with many more to find throughout.”

ZeNfA Productions is now ending development on Drop It: Block Paradise! and plans to release it in early 2017.

You can watch the final trailer below. 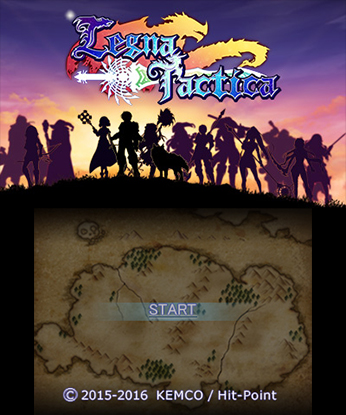 Legna Tactica, which Kemco just recently released in Japan, will be receiving a western localization soon according to the studio. Nintendo has also listed the game on its website, further confirming the news from Kemco. The title will be likely released in the west sometime in early 2017, but there’s no confirmed date yet.

Here’s the official overview of the title:

“In the lands of Feyzum, where the Kingdom of Legna is drawn into the chaos of battle against the Empire of Izmoot, Leck and his friends Miana and Astar are engaged in field training as trainee soldiers. Suddenly, it is decided that they will accompany the Hero of the Kingdom of Legna, General Varrius, and the Azure Hawk Brigade which he leads, on a mission to suppress the bandits. However, they know nothing of the inescapable destiny that awaits them…

Legna Tactica is a full-scale strategy RPG with an orthodox system where players can choose party members to join turn-based tactical battles on isometric grid.

Not only the game features multiple endings based on the player choices during the story, but also titles to achieve and engaging skill tree system to customize characters as you like!

It is time to witness the fate of the lands of Feyzum!”

Indie developer Cragworks is now preparing its next release for 2017 titled Reversi 32.

Cragworks put up a Miiverse post about the project, which contains a brief look at the single-player mode where you play against Bigley in the board game, Reversi. Players have black tiles while Bigley uses white tiles.

Ratalaika Games is currently wrapping up work on updates for two of its previous eShop releases, Defend Your Crypt and Blasting Agent: Ultimate Edition. These patches will be released in early 2017.

Defend your Crypt’s update is fairly substantial, since new maps will be added, and various tweaks will be implemented. The update should be submitted to lot check very soon.

Blasting Agent’s update is softer, and should be adding Russian as a supported language. It’ll be submitted in early January, and Ratalaika will also be working on a Japanese version of the game in the meanwhile.

Circle Entertainment has finally posted the very first screenshots from Go! Go! Kokopolo 3D. The game was announced to be in development four years ago, so it’s reassuring to see some proof of its existence. You can find the screenshots below.

The Unlikely Legend of Rusty Pup

Gory Detail has shared some new screenshots from its upcoming title The Unlikely Legend of Rusty Pup. You can take a look at them in the gallery below.

Shovel Knight has been making cameos left and right in various games, including in Azure Striker Gunvolt 2 earlier this year. In 2017, Shovel Knight will be showing up in Yooka-Laylee as well.

That said, David D’Angelo of Yacht Club Games was asked about all the Shovel Knight cameos in a recent feature on Nintendo Life. He shared the following thoughts on the character being featured in other studios’ games:

“Typically with our cameos the developers have reached out to us as they were excited about the possibilities of having Shovel Knight in their worlds. It’s really thrilling for us to see Shovel Knight in new environments, so we’re happy to be a part of the fun. Honestly, we usually don’t have to do much from our end as all the developers we’ve worked with have been top notch and very respectful of the IP. Yooka-Laylee was an especially fun one though as we created the 3D model in-house. It was enjoyable to leave the second dimension for a bit! Gunvolt was incredible – it was amazing to work with Masaya Suzuki to design the Shovel Knight sprite. What a legend!”

If you would like to check out the remainder of the interview, you can do so over here.