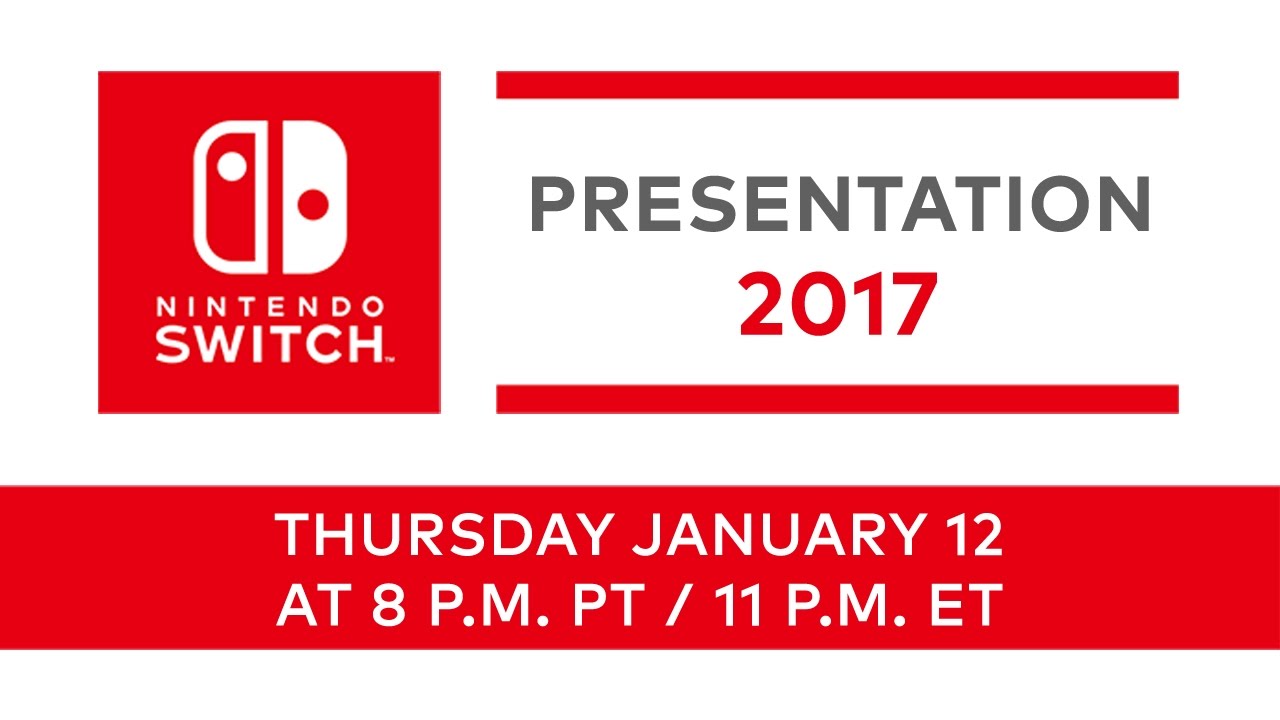 Nintendo spent last week preparing for the Switch reveal event. The company has now launched official websites and social media accounts for the event. You can find the Japanese site here, and the North American site here. No dedicated European site has been shared yet. You can also check out the Japanese Twitter account dedicated to the event and console over here.

When it comes to the presentation itself, Nintendo president Tatsumi Kimishima will be hosting it, as confirmed by the invitation on 1-UP Studios’ Facebook page. However, it’s possible that Kimishima will be joined on stage by other Nintendo faces. The presentation will last for about an hour, and will be broadcasted in Japanese with english voiceover for Europe and North America.

Reception for the event opens at 12 PM local time on January 13, but the event itself officially begins at 1 PM at the East Hall 8 of Tokyo Big Sight. This is equivalent to 4 AM in the UK and 5 AM in Europe on January 13, and 8 PM PT / 11 PM ET in North America on January 12.

The official Japanese site mentions that there is a chance the presentation will contain software with age restrictions, meaning there might be games that may not be suitable for children.

Once the presentation is over, Nintendo will be putting up a list of playable software and stage times for its hands-on events in Japan. Sessions will be held on both January 14 and January 15.

Attendees will be able to take photos and videos inside the exhibition except for the stage shows. Close shots of game footage are forbidden.

My Nintendo members can also participate in a lottery to win a Switch system, through which 10 units will be given away each day. Attendees can register for this using the QR code feature recently added to Nintendo Accounts.

Following the reveal event, the Nintendo Treehouse Live will be back on January 13 to give fans a better look at some of the upcoming titles for Nintendo’s new system. The stream will be held on both YouTube and Twitch at the following times:

On other Switch relevant news, we now know that Circle Entertainment has attempted to apply for a Switch licence. However, CEO Chris Chao says “Nintendo wants us to be patient”. Chao shared his concerns about the Switch with Nintendo Life:

“Right now we are focusing on 3DS, Steam and PlayStation (probably VR); we tried to apply for a Switch license and Nintendo wants us to be patient. Personally I am a little bit worried about Switch (not the hardware), but I’m still willing to work on the platform.

If you want to know my worries, I have to say that if this platform can easily port the likes of Unity and Unreal, for gamers that’s cool to see so many titles come out, but how can we make sure game quality will stay at a high level? Maybe some indies will port 5-10 titles in 2 months; it’ll be hard for small developers to survive on the platform with such huge competition.”

Nintendo Switch Starter Kit
Featuring all the essential accessories a gamer could ask for, the Starter Kit features a Carry Bag, Stereo Earbuds, Cleaning Cloth, Screen Protector, Control Caps and Game Cases to allow for an enhanced gaming experience and protection for the tablet screen and games.

“Nintendo has a tradition of honouring the past while forging a bold future, and with the release of the NES Classic Edition as well as the forthcoming Switch, we believe that gamers everywhere will respond positively to the new hardware Nintendo are introducing. We expect our range of Switch accessories to be high quality and thoughtfully designed, ideal for a day one purchase alongside new console sales. We believe that the new products announced today will allow us to continue growing market share in our gaming hardware business and look forward to sharing further details soon.”

You can take a look at those Snakebyte Switch accessories in the gallery below.

Snakebyte isn’t the only one investing in Switch accessories though, since Hyperkin also announced its own line of accessories for the platform.

Hyperkin’s offerings include a 5 ft. USB Type-C charging cable, a USB-C AC adapter with a 4 ft. cable, a car charger adapter for the console that has a 5 ft. cable. There’s also a screen protector, a hard shell carrying case, and a travel bag with padded storage, that are all still in the works.

Take a look at the gallery below for some extra details about these products.

Nintendo fans on Reddit have recently come across a hidden message after poking through the contents of the Nintendo Classic Mini: Famicom. This entails a special note left behind by the developers, which you can see below, signed off by the “hanafuda captain”, which is likely a reference to Nintendo’s old days when the company used to produce Hanafuda playing cards. Check it out. 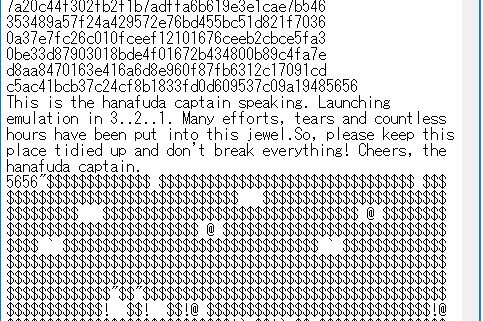 Nintendo has once again shared a new screenshot from The Legend of Zelda: Breath of the Wild on Facebook, which you can find below. Interestingly, like many fans have noticed, it looks like the man carrying a backpack could be Beedle, or at least related to him. 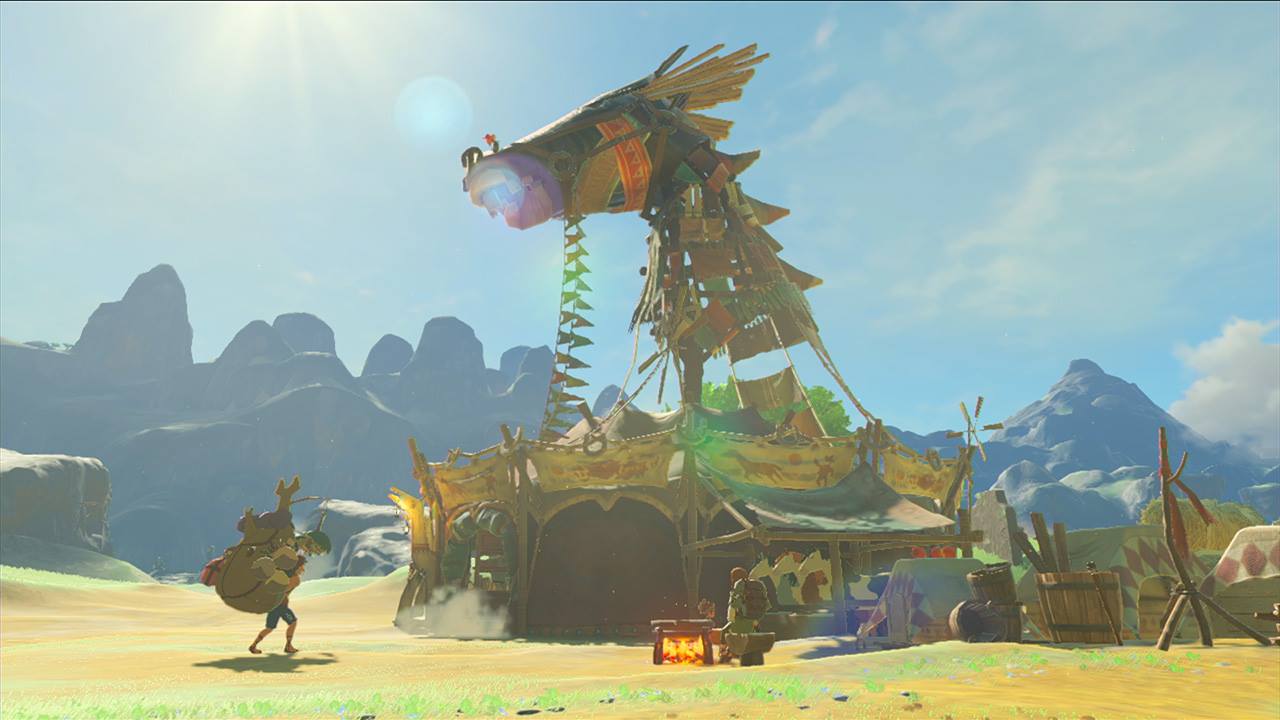 Defenders of the Triforce

Defenders of the Triforce, the upcoming puzzle experience by Nintendo and SCRAP, will start in just a few weeks. The highlight will be solving a mystery in a huge area within a set time limit, however those who are participating will be able to purchase some exclusive merchandise as well to sweeten the deal.

A first look at the various items that will be on sale has now been shared. Here’s the lineup and some photos of the items:

Takara Tomy Arts has announced that a new set of Pokémon Sun & Moon figures is now in production. These are based on some of the Alolan Formes introduced in the games.

All of these figures will be releasing in Japan in April, and will be priced at 300 yen each.

You can take a look at them in the picture below. 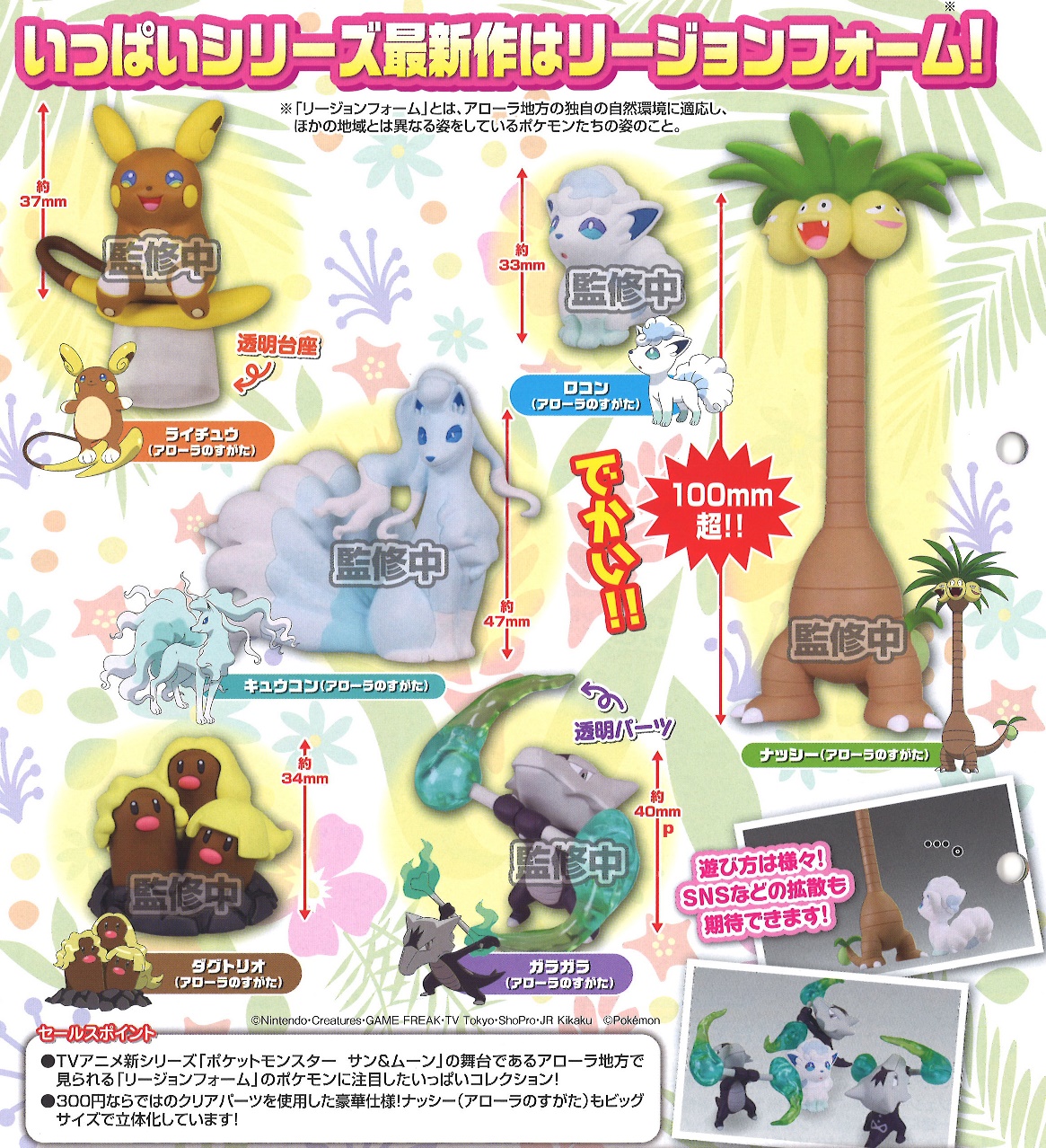 Nintendo has now uploaded a new commercial and animated short for Poochy & Yoshi’s Woolly World. You can check them out below.

On another note, Tomoya Tomita, who has worked at Good-Feel since the Wii era in collaboration with Nintendo, has now decided to depart from Good-Feel to work as a freelancer. Tomita is now taking on requests, and has clarified that he will still work with Good-Feel as a freelancer. He also uploaded 6 unused music tracks from Yoshi’s Woolly World, which you can find on his Youtube Channel in the following playlist.

San-ei Boeki has announced a new line of All Star plushies, featuring a mix of characters from the Mario and Kirby franchises such as Rosalina, the Hammer Bros., Dry Bones, and even Kirby.

The plushies will start shipping around March 18th, so make sure to pre-order them until the deadline of February 7th (you can try ordering the plushies from places like Play Asia). You can also view various pictures in the gallery below.

Once again, Miitomo has been updated with the usual new and returning Miitomo Drop and Miitomo Shop content.

You can find a list of the additions below. 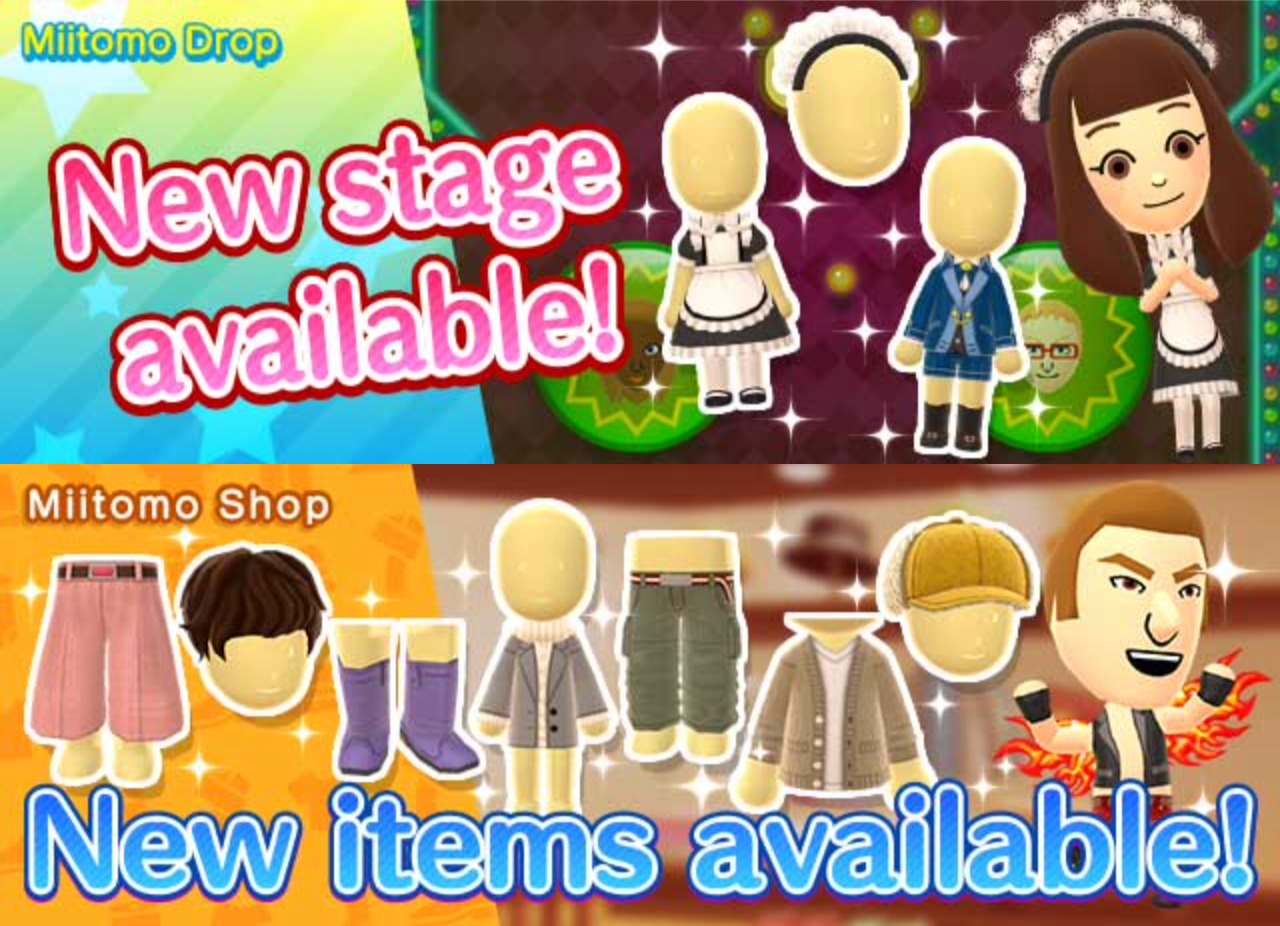 Pokemon Snap is now out on the North American Wii U eShop, so a trailer for this Virtual Console version can be found below.

According to market research firm Newzoo, it’s estimated that Super Mario Run has generated over $30 million in gross revenue, and has been downloaded 90 million times. That would mean that 3 million players have paid the full $10 price for all of Super Mario Run’s content.

Apple also announced that Super Mario Run was among last year’s top 10 most downloaded apps, despite the fact that it debuted in December. It also set a new record, with over 40 million downloads in just four days following its release. The game was the most downloaded app globally on Christmas Day and New Year’s Day. Pokémon GO, however, took the spot of the most downloaded release on the App Store worldwide in 2016.

Meanwhile, the latest issue of Hobby Consolas revealed Spain’s best-selling games of 2016 through December 10. Pokémon Sun & Moon came in second, while Yo-kai Watch managed to get the 8th place. The magazine also labeled Skylanders Imaginators as a “flop”, with only 10,000 copies across all platforms.

Meanwhile, in Japan, Famitsu revealed the best-selling games of the region during 2016. The lineup is mostly made up of 3DS titles, as you can see below.

And when taking a look at the hardware totals for all platforms the 3DS once again comes out on top (note that numbers in parenthesis are from last year):

Nintendo has released a new video showcasing a few of the European digital game highlights from December 2016. Check it out below.

The latest episode of Nintendo Minute is now available and features Kit and Krysta sharing their gaming resolutions for 2017. You can check it out below.