Here’s some gameplay footage from GameXplain and Nintendo World Report:

Below you can find some details about the game, and after that the usual assets.

– 1-on-1 (2 players) and doubles (four-player) matches on display at E3;
– Giant Mode: Mega Mushrooms are occasionally thrown onto the court, seemingly at random;
– By nabbing a Mega Mushroom your character will grow huge for an extended period of time;
– Shots become more powerful and your reach much longer;
– This mechanic requires some strategy, as hitting a power shot as a giant can knock back your opponents during their return shot, potentially leaving them vulnerable to a well-placed drop shot;
– Grabbing the Mushroom pauses the action abruptly to play an animation;
– When this happens, the game resumes the action a split-second in the past, allowing you time to get your bearings and get your timing right;
– Mario, Bowser, Peach, and Toad are present in the demo;
– Use combinations of button presses for a variety of trick shots, including top spin, side spin, lob shots and drop shots;
– Charge up shots for a bigger bang at the cost of reduced mobility if you misjudge ball placement;
– Only one court in the E3 demo;
– Fast-paced, arcade-style tennis game;
– E3 matches are a part of Mega Battle mode;
– This has the previously mentioned giant mode mushrooms wandering onto the field from time to time;
– When bigger, the increased reach and wingspan makes it easier to return wide shots, but Mario’s head can get in the way;
– Always have the same techniques regardless of size;
– You also have the Topspin and Slice shots at all times;
– These are the A and B buttons respectively;
– Ultra Smash: keeps the multi-button shot combos from Mario Tennis Open;
– ‘A’ followed by ‘B’ sets up a Lob, for instance, and ‘B’ followed by ‘A’ a Drop Shot;
– One new addition for Ultra Smash is the Jumpshot;
– By pressing ‘A’ or ‘B’ twice in a row you can return the ball from mid-air;
– Chance Shots: sometimes see differently colored spotlights appear where the ball is about to land;
– If you make it to the ball in time and pull off the particular shot indicated by the colour in the circle, you’ll send back your return with a massive boost;
– Red for Topspins, white for Drop Shots, etc.;
– Play with a Pro Controller;
– New dive button assigned to “R”;
– Tap “X” to activate the best shot for the situation every time, including during Chance Shot opportunities; 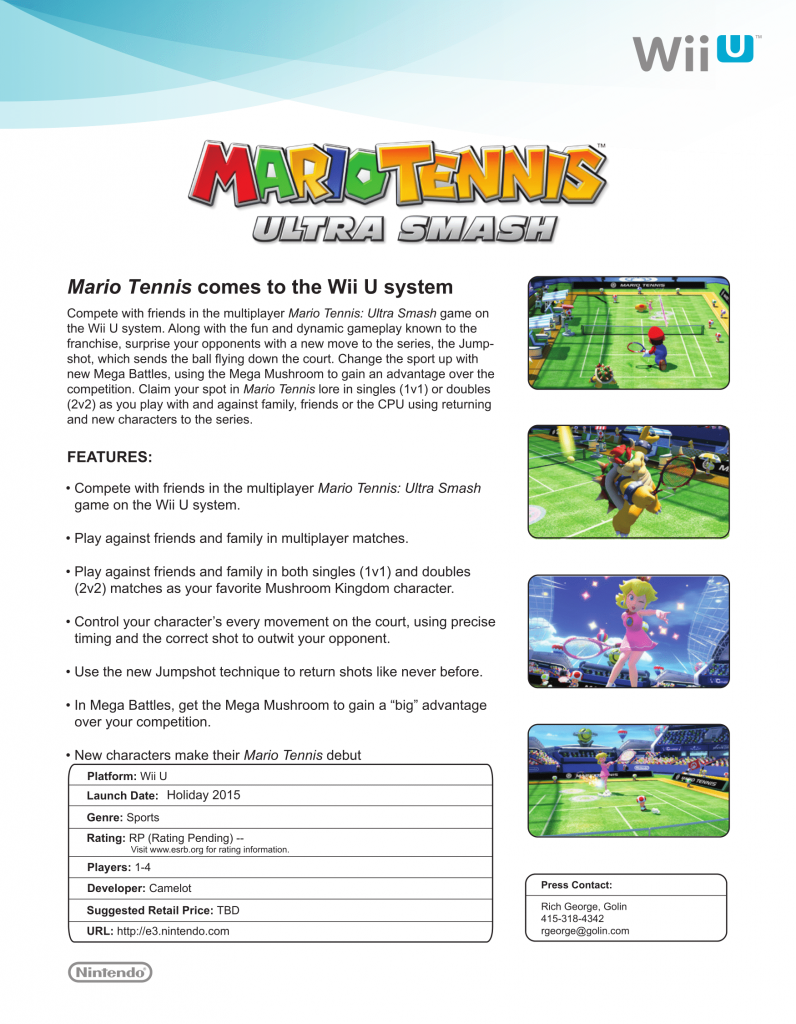