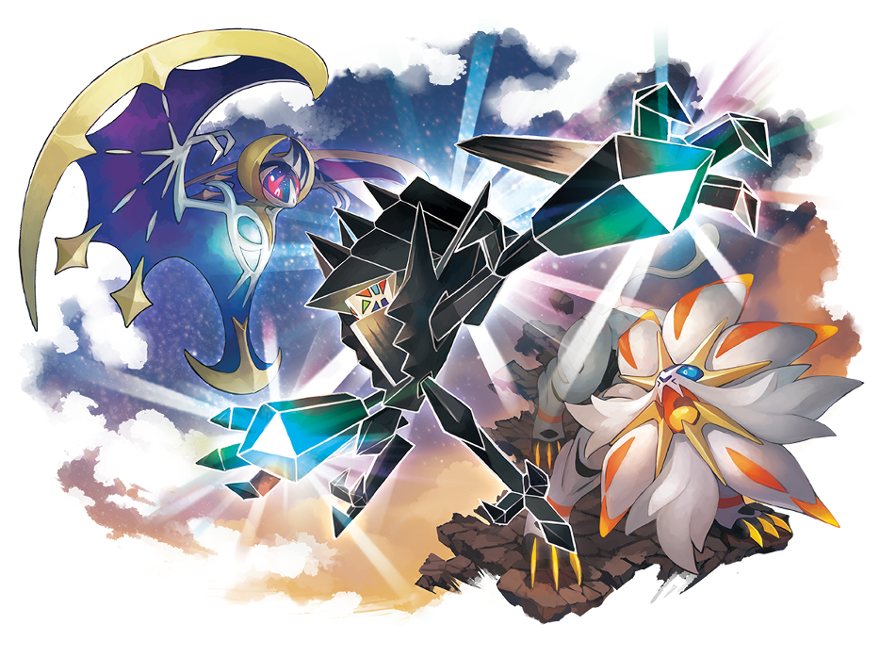 Since the interview had some interesting new tidbits, I decided to translate those relevant parts, and highlight the new information in red. You can find it below.

In the initial versions, after defeating the Pokémon League, we could further explore the region and catch the different Ultra Beasts. When it comes to the end game, what will there be that is different in these new versions?
Kazumasa Iwao: In the previous games you had Solgaleo and Lunala, the two Legendary Pokémon of Sun & Moon. This time you will be able to ride on top of these Pokémon and explore the Ultra Worm Holes. As you probably know, Solgaleo and Lunala have the ability to open these portals and in the new versions you will be able to explora what is inside them. On the other side is the world of the Ultra Beasts, where you can find them. Besides the Ultra Beasts, there are other places where you can encounter strong Pokémon. For example, Mewtwo is in the game.
Still when it comes to the post game, there is a lot of content after the main story ends. For example, Ultra Sun & Ultra Moon have more than 100 small events that you can find while navigating the map. There’s really a lot of content in these versions that players will be able to explore.

Could it be that Necrozma is an evil Pokémon? In Pokémon games until now, we have had powerful Pokémon that are used for evil reasons by people with bad intentions, but Necrozma seems to be the first Pokémon that is genuinely evil. It’s all black, and it even sucked all the light in Ultra Megalopolis.
Kazumasa Iwao: That’s an excellent question! Until now in the Pokémon series, like you said, we never depicted any Pokémon as if it were necessarily evil. In Necrozma’s case, depending on your perspective, you might think that it’s evil, but from another view point it might not be. In fact, there are certain things that Necrozma has to do to survive, but there is a natural conflict with the characters that appear in Ultra Sun & Ultra Moon.

Were there any changes made to Festival Plazza? I think the space is a little confusing and didn’t understand its purpose. I know it was possible to train Pokémon, but think that Poké Pelago was an easier and more effective system.
Shigeru Ohmori: Festival Plazza is an important part of the world we built, therefore, it’s still back. However, we added some features like the Alola Photoclub, where you can take photos and save them and/or share them with other players. The basis for this is Festival Plazza. There’s something else new in this area, but we can’t talk about it at this moment. We can only say it’s related to the battle system of previous games.
When it comes to Poké Pelago, we are happy that you say you like it. There were a few changes this time to make it even easier to evolve your Pokémon there. Let’s hope you like the changes.

Going back to Necrozma. On one side we have Pokémon and on the other we have Ultra Beasts. Might Necrozma be the lost link between these two types of different creatures?
Kazumasa Iwao: We didn’t give Necrozma that particular role, but when it comes to the Ultra Beasts, you will be able to visit their world. By doing that you will learn more about them, the place where they live and why they exist. You will also find out what type of relationship Ultra Beasts have with people as you advance through the story.
In one of the most recent videos we announced UB Adhesive, which comes along with the Ultra Recon Squad. This Ultra Beast has a different relationship with people which you can find more about in the story of Pokémon Ultra Sun & Ultra Moon.

I noticed that you added a Surf mini-game where at the end, depending on our performance, we are attributed a score. Is there any reward for completing this activity?
Kazumasa Iwao: Like you saw, in Mantine Surf you can make use of various techniques to obtain high scores. In the end you receive points and can use them to pay the Move Tutor, which can teach your Pokémon different moves they couldn’t learn in Pokémon Sun & Moon. You can also exchange the points for useful items.
There are various places where you can enjoy Mantine Surf, namely in areas that connect the two islands. We want players to use this activity to help them advance in the story.

Translation Notes: The points awarded in Mantine Surf might be Battle Points since those have been used before to pay for Move Tutors and acquire various items at Battle Shops.
They also mention “areas that connect the two islands”, as if it were between two islands in particular, but they probably meant areas that connect any two islands, allowing you to travel between the four of them using Mantine Surf.