Renegade Kid has recently announced that Dementium Remastered will be coming to the North American 3DS eShop on December 3rd. You can find a trailer for the game below:

Image & Form has released a new batch of screenshots from SteamWorld Heist. You can find all the images in the gallery below and view them in 3D on a 3DS by scanning the included QR codes.

13AM Games is currently working on another update for Runbow, which will be adding some new online functionality, including the ability for 2-player matchmaking when playing online. This is in hopes of addressing issues some gamers have encountered in finding others to play with via the Internet. New fixes have also been implemented, and the studio is teasing “something little” which will “give you a hint about what’s to come”.

First off we want to make a heartfelt thank you to everyone that took the time to play with us online in Open Party Runs last week. We gave away a lot of soundtrack codes and had a ton of fun. We also learned a bunch about how to improve the Runbow experience for you!

A lot of people ask us to get more people online. I wish I could just go “yes, here you go,” and dump 1000 concurrent users on the servers for you at any given time. Since that’s impossible with my current level of income and free time (who will walk my dogs?), we can see if we can get more people excited about being online in general.

One of the main factors that deters people from getting online is the worry that there will be no one to match up with. This means less people go on because there are less people, and the cycle continues forever. Matching rooms with up to 4 people is still hard (and we shipped with 5-player matching!).

To fix this, we’re going to set up the lobby to match 2 consoles into a game. This way we can always be sure that any match-up the server makes will lead to a chance to play Runbow. 2 Player matches are a blast (get the swapper, run to the back or throw yourself off a pit. Top-tier kill) and we hope that everyone starts getting excited about being able to turn on Runbow and match up immediately.

While 2 player matches might not be everyone’s cup of tea, the more players that are on the server, the better chance there is of forming bigger and bigger games.

And once you have the game created, we’re designing it so it’s harder to lose the people in that party. More games constantly going will hopefully bring more people onto the servers, and that cycle will hopefully continue forever (in a good way).

It’s going to be a lot easier to start playing and continue playing. We have a few fixes in place to help address a few well-known issues that our community will be happy to see go, and we hope these demonstrate to you guys that we are constantly working to make this game work for you. We’ll start to announce what these things are as reports start coming in that our fixes have worked, but since a lot of issues can’t be tested until we see them with different types of hardware, suffice it to say that no news will be good news on this front.

We’ve also added something little… but hopefully it’ll give you a hint about what’s to come. We appreciate you guys taking the time and bandwidth to download our updates, and after this next functional update we’re going to rewarding that loyalty by bringing you some really exciting stuff. Stay tuned to us for news.

And as always, get ready…

Tomorrow Corporation has now confirmed that Human Resource Machine is due out on December 3rd in Europe. The game will be playable in several languages: English, French, Italian, German, Spanish, Dutch, and Russian. 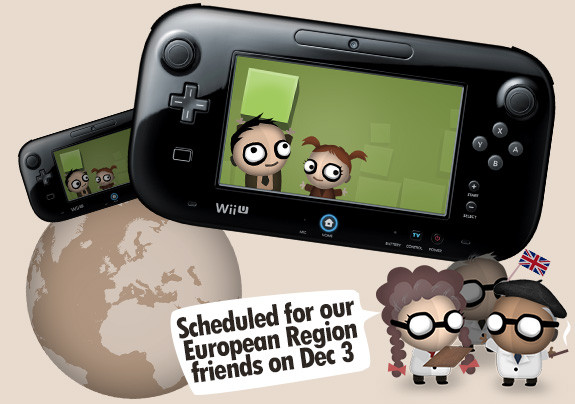 Moreover, a patch for the game will be arriving in North America on November 24. This brings the game up to date with the other versions, including the addition of the French and Brazilian Portuguese languages, plus a “slight tweak to jump arrows to make them easier to keep track of”.

Renegade Kid co-founder Jools Watsham recently shared some news on Twitter regarding the release date of Mutant Muddds Super Challenge. Apparently, the game won’t be releasing this year as expected, since it has suffered a bit of a delay, and will now launch in early 2016 for both the Wii U and 3DS.

Cypronia has been working on Cube Life: Island Survival’s version 1.1 for a while now and intends to have the patch ready for December, having submitted it to Nintendo, instead of September/October like originally planned. Here’s the official rundown of the situation:

We apologize for all the delays on Cube Life update. Development of an open-world, sandbox game with more than 300 items and tools to craft, including many elaborate maps, and perfect multiplayer gaming with several controllers support is difficult. As we promised, we even have Wii Classic Controller Pro support in there, too!

Believe us, it is not easy… Creating an update of this magnitude is very challenging. Testing alone is a very daunting task–we do not want to release an incomplete product. As you can see, there were some attempts by others to do something similar… UCraft has been delayed for years, and Minecraft for the Wii U seems to be a false rumor.

But we at Cypronia are still alive and hardworking. We thank everyone who is still with us… Your patience is going to pay off. We have included some great new features in Update v1.1: Create and play custom maps for Deathmatch Mode in Multiplayer! We simply cannot wait for you to get your hands on this update–we know it will be worth the wait.

The update for the North American and EU versions have been sent to Nintendo Lotcheck and we are patiently awaiting their approval. We will keep you posted with the release date as soon as we know it. It’s coming VERY soon… Get excited!

RCMADIAX recently shared a trailer of their upcoming Wii U eShop game Avoider. You can watch it below:

Avoider is not the only Wii U title in the works by RCMADIAX though, since the indie studio has plans to bring out “Skeasy”, a high score chaser, sometime during Q1 of next year. You can find a few screenshots below:

Team Cherry has recently released the “Ferocious Foes” trailer for their upcoming Wii U title Hollow Knight. The game features hand-drawn Gothic style graphics and fast paced platforming action. You can find the trailer below:

AckkStudios recently shared a new short video from its upcoming RPG YIIK. Check it out below:

Midgar Studio, the developers behind Hover: Revolt of Gamers, are still hard at work on the title, including the console ports. However, in a recent interview with WCCF Tech, Jérémy Zeler-Maury explained how the game will need to be remade from scratch for the Wii U “in terms of graphics” as some of the rendering techniques used apparently don’t run too well on Nintendo’s console.This means the Wii U version will be taken care of last, but Zeler-Maury promised that it won’t be a “cheap port”. You can find his comments below:

“The WiiU version of Hover is the most complicated thing and will be done after the console releases on PS4 and XB1. It will require us to recreate the game from scratch in terms of graphics. We’re using Physically Based Rendering and other rendering technologies that don’t really run well on WiiU. Also, we promised during the Kickstarter campaign that we would tune the gameplay properly, we don’t want to do a cheap port, so it will take some time.”