The latest issue of Famitsu magazine has uncovered even more details about Monster Hunter X, so once again gaijin hunter has translated and compiled all the new info in one of his videos, which you can find below:

Besides the Famitsu coverage, gaijin hunter also took the recently released demo of the game for a 2-hour spin. Check it out below if you want to see some footage of the game in action.

Capcom also uploaded one last gameplay video that you can find below:

The first of these collaboration is a partnership with CoroCoro that allows players to give their Felynes a set of equipment based on the magazine’s Zozozozombie-kun, as you can see in the render below. 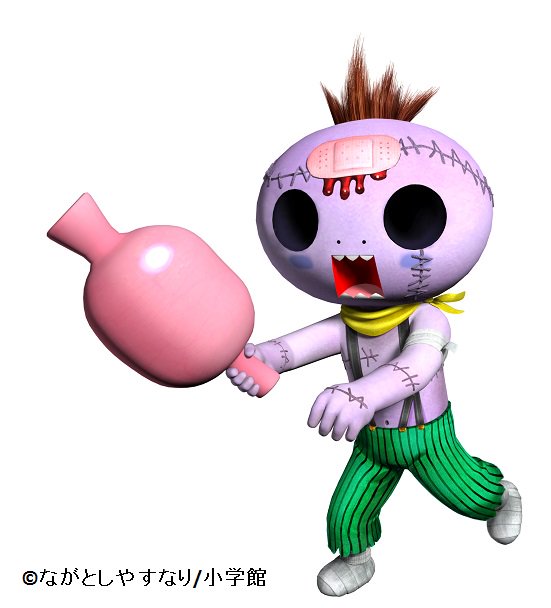 The second is a collaboration with Universal Studios Japan. Starting on January 15, players can obtain special equipment, guild cards and partake in a new quest. Here’s a render of the equipment: 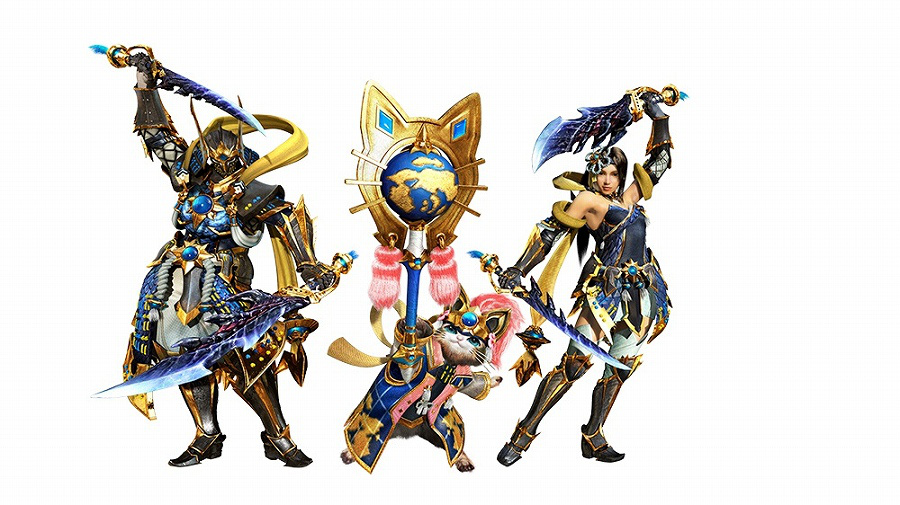 The third collaboration was revealed in the latest issue of V-Jump and lets players dress their Felynes in armor inspired by Yu-Gi-Oh!’s Dark Magician. Materials for the creation of the costume can be obtained after completing an original quest.

Finally, you can find below a new batch of screenshots from the game that was recently released by Capcom.

Nintendo recently released official trailers for Mega Man Battle Network 6 Cybeast Gregar and Cybeast Falzar on the Japanese Wii U Virtual Console. You can find them below:

Super Street Fighter II Turbo Revival, a GBA port of the original game, recently was released on the North American eShop for $7.99. You can find an overview of the game below, followed by a trailer and some gameplay footage:

“Choose from over 16 brawlers from the Street Fighter universe. The original eight world warriors are back, along with four playable boss characters and four newcomers. Execute special moves and super combos to wreak havoc on your opponent. There can be only one street fighter champion!”

Square Enix has released a new infographic for Final Fantasy Explorers showcasing the various jobs available in the game. There are 21 in total, with each of them sporting their own unique abilities and skillsets.

The western version of the game includes the Blue Mage and Samurai jobs from the start, while they were only available through DLC in Japan.

During the week, Bandai Namco announced a pre-order bonus for Project X Zone 2. Those who reserve the game in North America will receive a rare item pack, containing: 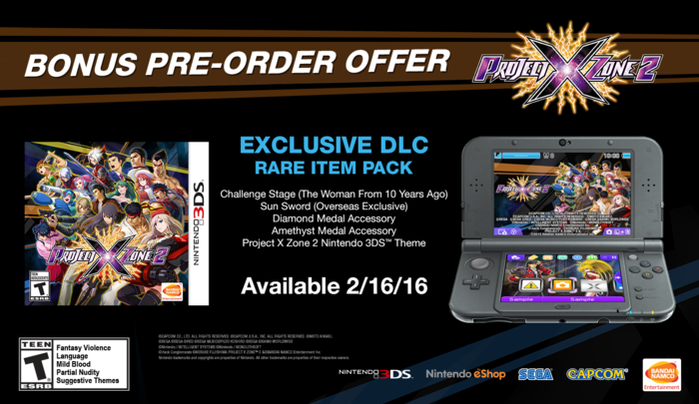 You can pre-order Project X Zone 2 at various retailers, including Amazon

Bandai Namco also uploaded a new trailer and commercial for Haikyuu!! Cross Team Match! during the week. You can view both of them below:

In the latest issue of Jump, it was revealed that a game is being made for the 3DS based on the manga My Hero Academia, written and illustrated by Kohei Horikoshi. 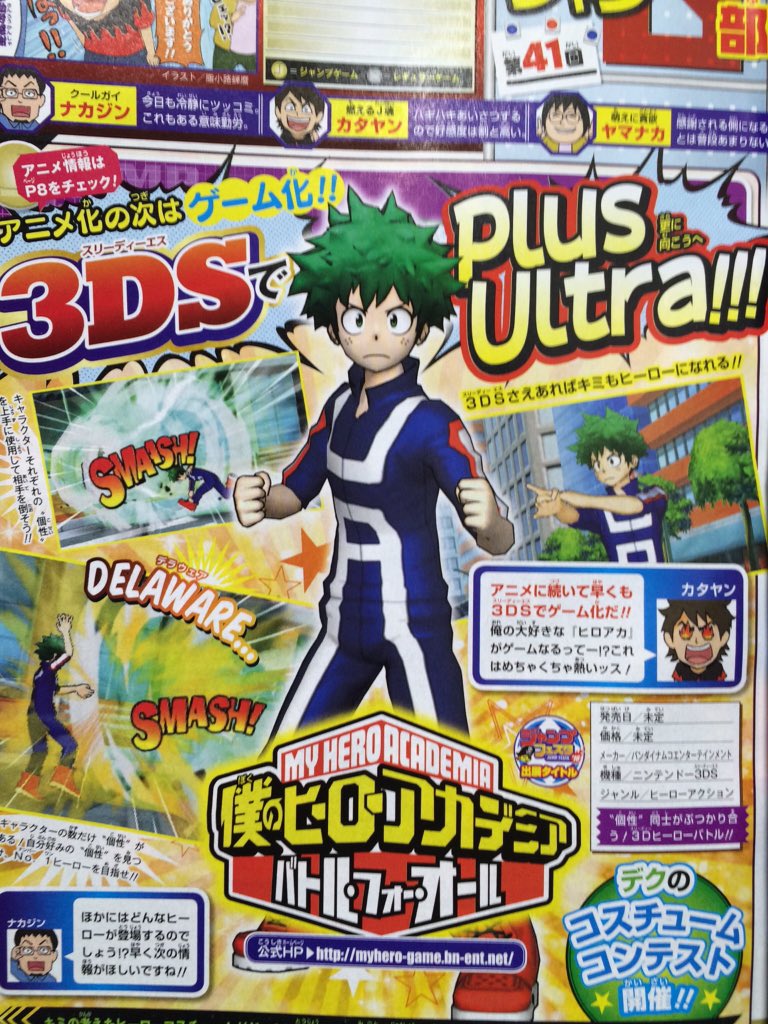 My Hero Academia: Battle for All is an hero action title in which players aim to become the No. 1 hero. Several characters from the manga will appear featuring their unique powers.

It’s currently unknown when My Hero Academia: Battle for All will be released, but the game is being published by Bandai Namco in Japan.

Imageepoch’s swan song of a game, Stella Glow, is now out in North America for the Nintendo 3DS, so Atlus released a new launch trailer for the game. Check it out below:

Famitsu also revealed that if you have save data from Shin Megami Tensei IV on your 3DS, you can transfer it and receive some items and equipment as a bonus.

Aksys Games recently released Moco Moco Friends in North America. To commemorate the company uploaded a new gameplay trailer showing off the beginning of the game. You can watch it below:

Nintendo has now confirmed the release dates for Story of Seasons in Europe and Australasia. Europe will be getting the game on January 8, while Australasia will receive it on January 9. You can find an official overview of the game below: 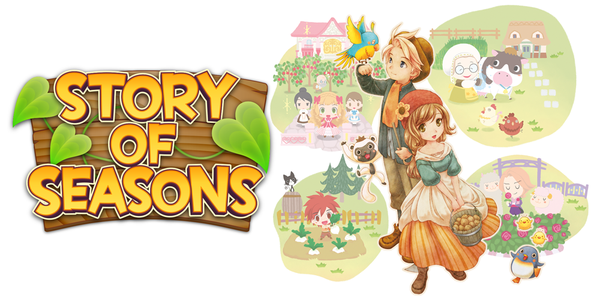 20th November 2015 – Get ready for a walk on the rural side in Story of Seasons, launching exclusively on Nintendo 3DS family systems on 8th November. Take control of your own farm in Oak Tree Town, make friends and help the community thrive again in Marvelous Inc.’s latest farming and life simulator. Story of Seasons is the beginning of a new chapter in the ‘Bokujo Monogatari’ series, which has been reborn in the West under a new name, but continues the well-loved traditions of the long-standing franchise.

Once players have arrived at their farms, it’s time to decide which crops to grow and animals to raise. As their farm grows, they can participate in the town’s annual competitions, make their own furniture, and even set up a wildlife safari full of exotic animals for fellow villagers to explore. Budding farmers can also go online to visit their friends’ farms, help harvest each other’s fields and even exchange gifts.

As players become part of the community they’ll have plenty of opportunities to show off their personality by giving their character a customised look. New outfits can be unlocked through play, allowing them to impress the locals – not to mention any eligible bachelors and bachelorettes on the path to blissful family life. Some accessories can also bestow extra stamina and health, or increase the price that produce can be sold for. A farmer’s life isn’t one of idly sitting about, after all!

When the time comes to sell produce, players can take advantage of the Trade Depot, allowing them to trade with farmers in all kinds of exotic locations outside of their village. The traders’ desires will change over time, and it’s up to budding entrepreneurs to decide when to sell in order to make more money. Trading a wide variety of products like fertiliser, fish, and milk, while buying items like silk and blueprints to create new tools will attract more merchants to the village, encouraging players to branch out and experiment in order to maximise their profits.

By snapping up some Mystery Seeds, crops can be grown that look remarkably like some famous Nintendo items. Immediately grow all nearby plants by sprouting a Super Mushroom, keep your crops fresh for up to thirty days and make them more valuable with the Super Star, or rid yourself of any wilted crops with the Fire Flower.

While the game still has the traditional match-3 gameplay, it now contains classical RPG elements like the focus on story and character progression as well. You can choose to play as either a male or female character, and the game will feature a full 3D overworld.

The game takes place on Dorogoza Island, a place with a lot of “Drop” energy. There are over 500 monsters in the game and, like in previous Puzzle & Dragons games, many of them can evolve. Furthermore, the main character can wear pieces of armor that were strengthened with the monsters’ energy, allowing him to use their skills in battle.

You can find some new screenshots and artwork in the gallery below:

Another week, another batch of Monster Strike screenshots and artwork were released by Mixi. Check them out  in the gallery below:

Silver Stars’ Noah’s Cradle recently hit the Japanese 3DS eShop. You can find a trailer for the game below: