Splatoon got another two new weapons during the week, these being the Bamboozler 14 Mk II and the Hydra Splatling. You can find some screenshots and a look at both weapons below:

Next, Japan received a new commercial for the game, that you can watch below:

Also, the results of the 8th Japanese Splatfest are now in. You can find them below: 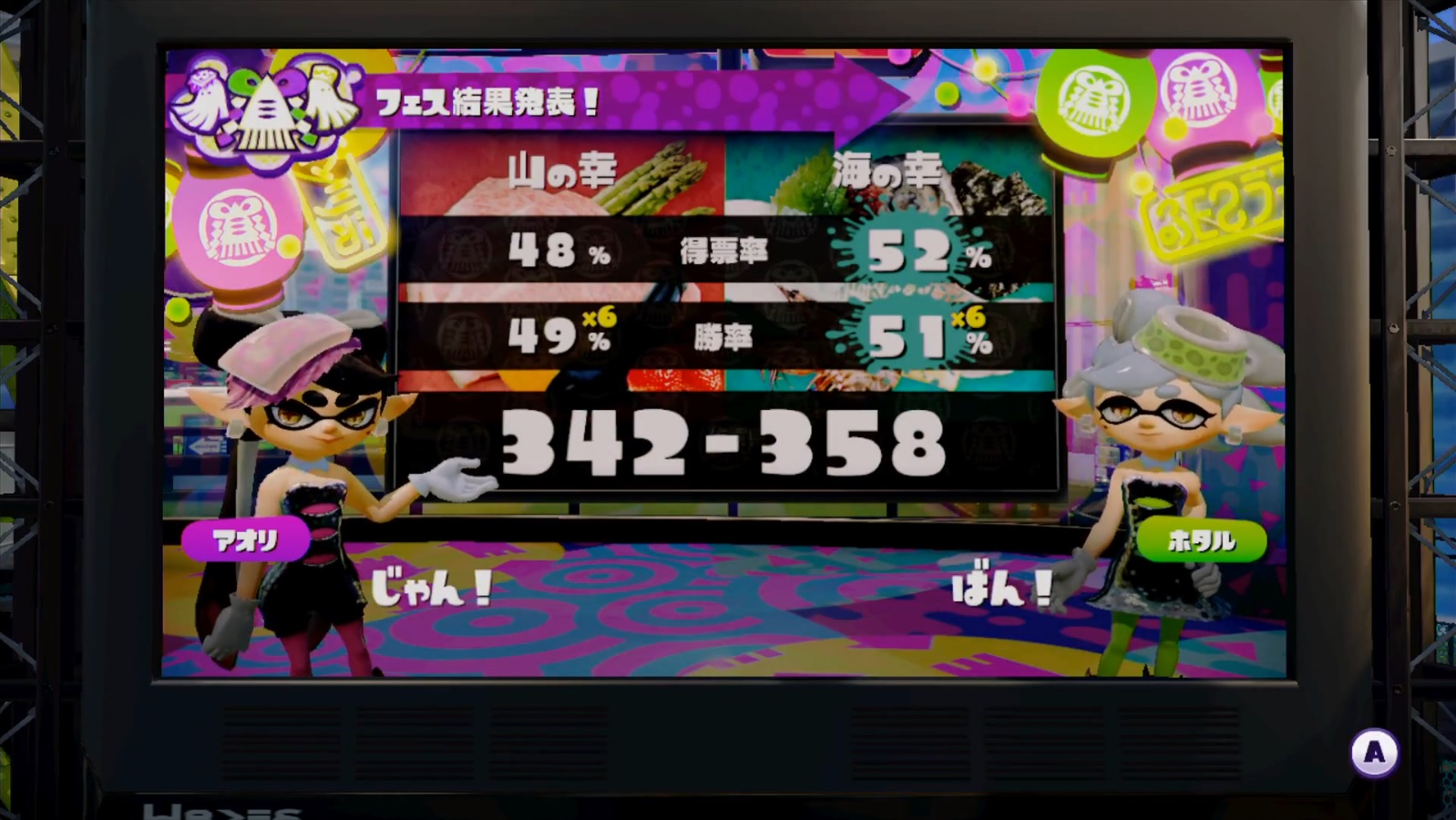 Super Mario Maker added a new Event Course on November 17th, the level that was featured in the final round of the PAX West 2015 Omegathon. You can find some footage of it in the video below, courtesy of GameXplain:

Japan also got a new Super Mario Maker commercial this week. You can watch it below:

Finally, you can find a new interview with the developers of the game from Japanese magazine Nintendo Dream over at Nintendo Everything, here. During the interview, the developers explain how difficult it was to implement Yoshi in the game and discuss some of their favorite characters in the franchise.

Nintendo World Report have published a new preview article for Mario & Luigi: Paper Jam, revealing some new details about the game in the meanwhile. Here’s a roundup of the details:

In Japan, Nintendo also released a new trailer and commercial for the game, which you can find below:

Finally, you can find below a playlist of NintenDaan’s videos from his Nintendo World Report preview of the game mentioned above.

Pokémon Super Mystery Dungeon has recently been released in North America, so The Pokémon Company shared a launch trailer with us. You can find it below:

You can watch the fist 110 minutes of the game in the video below by TiLMENDOMiNATiON:

Since New Style Boutique 2 is now out in Europe, NintenDaan uploaded a couple videos taking a first look at the game and showcasing the various items you can get via the amiibo support in the game. Check them out below:

In the latest episode of Nintendo Minute, Kit and Krysta cover the upcoming Wii U title Xenoblade Chronicles X. Check it out below:

Nintendo has also released some new commercials for the game recently, which you can find compiled in the video below thanks to NinEverything:

Linkums (WhatTheyCallGames) also put together a video showcasing all the available base arts to each class in the game, which you can find below:

Next month, Kadokawa and ASCII Media Works are publishing Xenoblade Chronicles X: The Secret File Art of Mira in Japan, a softcover art book for the game. It contains official publicity art, unpublished setting material, storyboards and other planning material. It’s slated for release on December 25 for 3,240 yen. It’s up for sale on Amazon Japan over here.

Finally, Nintendo UK product manager Gemma Hall spoke with MCV about who Xenoblade Chronicles X is intended for, and how the company will go about marketing the title from now on. You can find some coverage of this interview over at Nintendo Everything, here.

This week some new details about Hyrule Warriors Legends were revealed through Famitsu and the game’s official website. You can find a roundup of those details below:

– The introduction of the new Wind Waker episode, will bring a slight change in atmosphere to certain stages that players can look forward to. For example, Lake Hylia has an evening scene added, while Valley of Seers has a blue sky again due to being liberated from Cia’s magic;
– Once again, all characters will be available in the 3DS game as well as the original Wii U title, but the Wind Waker and Linkle stories will be exclusive to Hyrule Warriors Legends;
– Linkle keeps an important compass with her that has been passed down since ancient times. She’s described as a bright and free-spirited young girl, that travels around in order to save those in need, aiming to be like the heroes of Hyrule;
– Hyrule Warriors Legends will contain a new story featuring Linkle. During the story, she’s on a journey to Hyrule Castle with the aforementioned compass. It’s said to be a behind-the-scenes story. Characters such as Midna (in her true form), Skull Kid, and others, will appear as playable characters during her story as well. Famitsu wonders how Linkle’s adventure will tie into the main story;
– Linkle is based on a concept for a “female version of Link”, and was already considered during development. Her popularity exploded from the designs seen in the art book, so she was implemented due to fan wishes.
– As previously mentioned, Linkle uses a pair of crossbows, and can attack with them in midair or while moving. Between those two ways, she’s able to deal great damage. Linkle can send enemies flying with a number of speedy attacks, and follow up with an attack that can cause an explosion, via bomb arrows. Players can later learn about all the different types of arrows in her arsenal;
– Midna can be returned to her true form by freeing her from her curse. She holds a sacred mirror left behind by the gods. Midna summons beings from both the worlds of light and shadow for support;
– Finally, some characters will be receiving new weapons in the game. Famitsu shows us a trident for Ganondorf, which is a three-headed spear, which is capable of unleashing rapid attacks and ranged lightning attacks. Based on what’s shown in Famitsu, it seems that these new weapons will eventually be offered in Hyrule Warriors on Wii U, too.
– The website also reveals some information about Skull Kid, saying that when he meets Linkle, he steals her precious compass and she has to get it back from him.

You can find a new batch of screenshots in the gallery below, followed by a recently released trailer for Toon Link:

Several new details about Genei Ibun Roku #FE’s Mirages were discussed during the latest Japanese Nintendo Direct. Now that Serenes Forest has translated those for us, here’s a roundup of all the details:

– Characters acquire skills as they battle with their Mirage;
– These skills can be used during battle to cause various effects and many of the skills on offer are derived from the Shin Megami Tensei series, such as Sukunda and Bufula. There are some from Fire Emblem games as well, such as Flux +1;
– Kiria receives the Tarunda skill from Tharja;
– There is a partially filled bar for the next skill Agilao;
– Tharja has a “Carnage” called Vajra equipped, which seems to be what is granting her the skills;
– Players can speak to Tiki to undergo “Carnage Unity” or “Radiant Unity” (or ask her for Unity-related help);
– Carnage Unity uses materials earned from battle or by other means to create weapons known as “Carnage” for Mirages to equip;
– Each Carnage has its own weaknesses and resistances, Attack rating and set of skills;
– It seems like once all of the skills have been learned, the Carnage is considered “Mastered”;
– For example, Chrom currently has an “Iron Sword” Carnage equipped and it seems he starts with the “Sealed Falchion” Carnage (just like in Awakening);
– If you want to upgrade to the stronger “Épée Rapier” Carnage, you’ll need to hand over 1 Blade Force, 1 Deep Sea Illumination and 2 lots of 1-Star Stardoms;
– Mirages can Class Change like in the Fire Emblem games they’re from;
– Caeda (a.k.a. Shiida/Sheeda), Tsubasa’s Mirage, is shown changing class from a Pegasus Knight to a Falcon Knight or Dracoknight using a Master Seal;
– Falcon Knights have improved Speed and Resistance, while Dracoknights boast higher Defence and Skill;
– Changing classes improves stats and alters the character’s Mirage Attack;
– As a Pegasus Knight, Tsubasa has the “Aerial Dance” attack, while she has “Grand Finale” as a Falcon Knight;
– Achievements of some form will be featured;
– After changing class to Falcon Knight, a pop-up appears in the bottom-right corner displaying the “Birth of a Falcon Knight” achievement (“Play Record”);
– After walloping a whole bunch of enemies at once with Grand Finale, the “Performance Beginner” achievement is earned;
– From December 1 2015, three songs from Genei Ibun Roku #FE will be released in Japan for Wii Karaoke U: “Reincarnation” by Kiria, “Feel” by Tsubasa and “Beastie Game” by Tiki.

The latest issue of Famitsu also featured another update on Genei Ibun Roku #FE. The magazine introduces the location known as Bloom Palace, and also shares more information about some battle elements (some of it is a repeat of the Nintendo Direct info above). You can find the information covered rounded up below courtesy of DokiDokiKusoge’s translation (with some naming adjustments by me based on my FE and GIR#FE knowledge):

– Bloom Palace is basically your home base in the game;
– It’s run and managed by Tiki, which is the key visual character for a voice software (in this game);
– This is where you can talk to your Mirages and it’s an important place to them;
– This is also where you strengthen your characters;
– As your characters become better Mirage Masters, you gain the ability to use Radiant Unity;
– You can then have your characters learn various abilities and skills that activate in battle;
– In battle, your Mirages can wield powerful weapons known as Carnages;
– Carnage Unity is a system designed to create new Carnages;
– Each weapon has a different attack rating, element and skills Mirages can learn;
– The key to all of this is the previously mentioned “Performa”;
– “Performa” is an energy that is gained largely through defeating enemies, and depending on the enemy you fight, the kind of “Performa” that can be gained varies;
– Mirages can undergo Class Changes as well, which happens in largely the same way as in FE;
– You need Master Seals and once you’ve obtained these, you can perform class change;
– For example, Chrom going from Lord to Master Lord or Overlord;
– Pegasus Knight can class change to Falcon Knight or Dracoknight;
– Cavalier can change to Paladin or Dark Knight;
– Knight can change to General or Berserker.

Most of this information about Tiki and Bloom Palace was also shown in two new trailers released by Nintendo in Japan, which you can check out below:

Animal Crossing: Wild World released for the European Wii U Virtual Console on November 19. You can find a trailer and some footage from it below: