In a recent interiew with MTV, Miyamoto and Tezuka shared their interest and openness to the idea of making films based on Nintendo IP, and even talked about how they would go choosing actors for the roles of Link and the Mario Bros.

You can watch the fun interview below:

Nintendo recently released a new patch for Super Mario Maker, bringing the game up to version 1.10. With this 223MB update “Adjustments have been made to make for a more pleasant gaming experience”.

Apparently the Super Mario Bros. 3 goal star sprite has now been fixed as you can see below.

A notice was also introduced saying that courses made by Nintendo cannot be reported, and that additional Nintendo-made course support was added to the game.

The only other files that seem to have been touched are related to menus.

Meanwhile, in an interview with EDGE, Takashi Tezuka explains why Nintendo chose to use New Super Mario Bros. U physics in all Super Mario Maker game styles:

“In the end we used the New Super Mario Bros. U system for all of the game styles. There was quite a lot of discussion about this within the team. Staff who had strong attachment to the original games expressed a strong desire to see implemented the same system they remembered. However, when players who are used to the modern Mario physics tried playing with the old physics, they found it much more difficult than they remembered. The original Super Mario Bros would only scroll to the right, so we tentatively made it so that it doesn’t scroll left in this game style. However, many people on the team complained that it was less fun to play. Still, we have left in some unique aspects to each game style, like how you can carry shells from Super Mario Bros 3 onwards, but you can’t throw them upwards until Super Mario World, and you can only wall-jump in New Super Mario Bros. U.”

He also commented on why they chose to have a day by day unlock system at first:

“This decision was part of our basic policy. We wanted the rewards to increase as you became more familiar with the game and to look forward to what would unlock the next day,” he says. “From our testing, we learned that if too much was available all at once then many players weren’t sure what they should do and didn’t have as much fun with the game. However, I do understand the feeling of wanting to unlock things earlier.”

Splatoon has added another weapon to its inventory this weekend, the Tri-Slosher.

You can find the official overview, screenshots and some footage of the new weapon, below:

“The Tri-Slosher is a Slosher-type weapon with three angles of attack! The individual splashes lose a little bit of power, but the wide spread makes it very handy in a tight spot! The Disruptor sub and Bubbler special make this set perfect for in-your-face splatting.”

Nintendo has announced that free DLC is coming to Animal Crossing: Happy Home Designer for the game’s European launch next week, on October 2, and North America on October 6. Players will have access to a new character, Louie, and a few new items you can see in the image below.
(Strangely enough, this “DLC” was in the Japanese version from the start and is being launched on the release date… the question is “WHY?”) 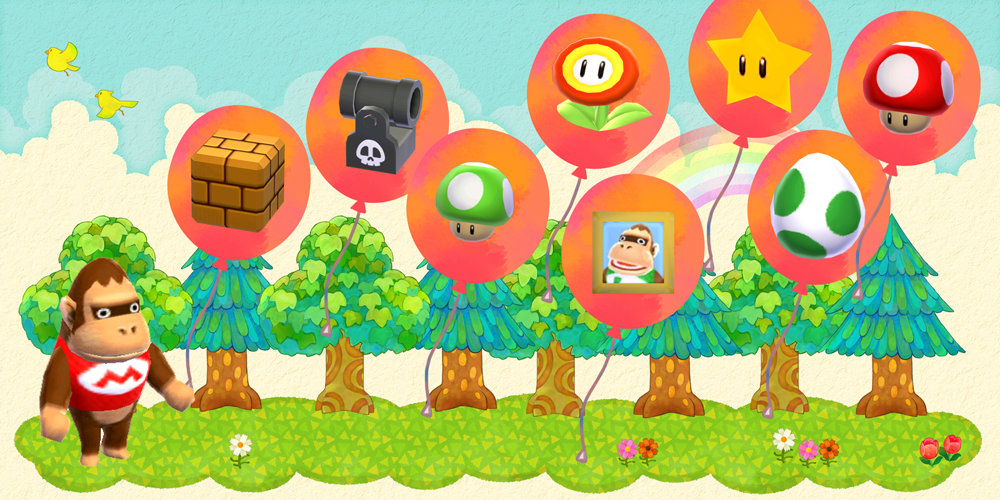 You can also find two new trailers below, and an unboxing of the Animal Crossing: Happy Home Designer New 3DS bundle.

As the release date for New Style Boutiwue 2: Fashion Forward approaches, Nintendo released a big overview of the game and a lot of screenshots to complement that.

You can find it all below:

Nintendo presents: New Style Boutique 2 – Fashion Forward gives players the opportunity to rise to the top of the fashion world as the manager of their very own boutique. The fun goes far beyond the shopfloor, as players can also let their creativity loose in four additional roles: hair stylist, make-up artist, model, and designer.

This third instalment in the fashion simulation series that has sold over 1.5 million units across Europe to date* lets budding fashionistas run their very own chic boutique in the bustling Beaumonde City, home to hundreds of colourful personalities. Characters visit the shop and describe what they’re looking for, and it’s up to the player to pick out the perfect look, choosing from 19,000 items like casual dresses, eye-catching t-shirts, and those all-important accessories including bags and earrings. Make the right recommendation and the customer will leave thrilled, sure to spread the word!

On top of the thousands of in-game items with which to style customers, there are special pieces that can only be unlocked by tapping compatible amiibo during gameplay, including Peach’s Princess Crown, Mario’s M-Hat, Yoshi’s Egg Hooded Jacket and more. New items will also be available to download after the game’s launch, while regular online themed contests will challenge stylists to show off their very best outfits. Couture connoisseurs can even organise their own contests for other players to join – perfect for finding inspiration and comparing ensembles.

In addition to the fun shop management gameplay of previous titles, four exciting new professions await dedicated followers of fashion, with the freedom to switch between them whenever they like:

· Hair stylist and make-up artist: Styling clients goes far beyond clothes, with a huge range of make-up looks to apply at the beautician’s and countless creative hairstyles to delight customers at the hair salon.

· Designer: Imaginative style enthusiasts can build their very own fashion house by designing a unique clothing and accessories line. Fashion labels are always on the lookout for up-and-coming designers, and often commission new items to complement their existing collection – a great opportunity to get noticed and spread the word about the boutique.

· Model: Players can also show off their sartorial savvy as a model for in-game brands, each with its own vision and needs. It’s all about pairing the right outfit with flawless hair and make-up, then bringing it all together with the perfect pose. Images from photo shoots might even appear on billboards and advertisements around the city for everyone to admire!

Lastly, a retreat from the hustle and bustle of the fashion world awaits at Caprice Chalet. Here, anyone with a taste for decorating can transform the rooms of a dollhouse into anything from a relaxing bedroom to a trendy boutique, then share them online or with other players met via StreetPass.

Nintendo has released some new commercials and footage from Picross 3D 2 in Japan. Check it out below:

The Japanese site for Tri Force Heroes recently updated and confirmed and revealed some info about the game and its modes.

The game consists of 32 levels, and at the beginning of each stage, each player picks one out of the following nine weapons:

The additional game modes available include:

The website also reveals that you can take screenshots at any time and post them to Miiverse after completing a level.

Finally, you can find some new screenshots in the gallery below:

The official North American website for Chibi-Robo!: Zip Lash is now open and you can find it here.

You can also find some new screenshots from the game below:

This one comes from composer Yoshiaki Fujisawa, where he talks about his experience of transition from producing tv anime music to video game music, and how the creative environment at Atlus helped him with that while granting him a sense of fun.

You can find an overview translation of Fujisawa’s post at Siliconera.

The official website for the Yo-Kai Watch cross-media project, called Yo-Kai World, is now open. You can find information about the games, anime and other franchise related products in there.

You can also find the first trailer for the English version of the anime below: