Thanks to the image below, we have found out that some of the character costumes in the game might be available in more than one color. Check it out:

Also, we now have a confirmation that each different style of Mario game present in Super Mario Maker will retain the physics of that particular style!

And here’s another piece of gameplay footage by Nintendo World Report:

Some extra details on how to make a good level and the e-manual have been revealed during a Polygon interview. Check them out.

This information comes from Takashi Tezuka:

In Mario games, each one has 60 to 80 courses, and each course needs to have its own unique defining element. If you build too many elements into every course, they start to feel the same. That’s something you need to be careful of. To me, the real trick is limiting [the number of] course objects. That’s what makes it really special.

People try to have a tendency to cram every cool feature into one. The role of Super Mario Maker isn’t trying to recreate a course or compete against something that you would purchase created by a professional level designe. It’s trying to do what you haven’t seen in a game and make it your own, to have fun. I think it’s great to find something that you think that works really well, copy it, mimic it and try to think of ways you can improve it. It’s a good way to learn.

I think the book that comes with the game will help people hone their skills and learn techniques they can add to their own courses. If we were to name this book, we would call it ‘The Seeds of Super Mario Maker.’ We give you all the basics to make something great.

Tezuka and fellow director Yosuke Oshino on the e-manual:

“We’re actually really, really proud of our e-manual because we found that players get stuck in creating a course, they can look to it for inspiration again and again in getting them on their way.” – Oshino

“With a browser-based e-manual, we can make anything we want. We have a lot more creative freedom to design [compared to a text-based manual]. We made it so that it’s something enjoyable all on its own. E-manuals aren’t known for being the most interesting reading. We don’t know people who read them, but we think you can read the Super Mario Maker manual all day. It’s going to be packed with all sorts of interesting content.” – Tezuka

– e-manual has tips and tutorials explaining the best practices of Mario level creation;
– Brief videos that players can watch, teaching the basics, like where players should place coins and how to build objects for Mario to jump on or over;
– There’s even an advice column included in the digital manual;

– Access online features in the “Course World” menu;
– “Makers”: see creators that you’ve chosen to follow;
– Tap on the names to get a close look at the levels they’re created;
– See how many people have played the level and what they’ve rated said level;
– Will always be updated on the courses created by makers you follow;
– “Courses” provides a wider selection;
– Browser courses featured by Nintendo on the “featured” tab;
– “Star Ranking”: view courses as ranked by popularity;
– “Up & Coming”: view new courses;
– Sort view by difficulty, location, and time period;
– People can name their levels whatever they’d like;
– Star or comment on the course after beating a level;
– Make comments during play, which stick around the world;
– These comments can be toggled;

To celebrate the 30th anniversary of Super Mario Bros. these two amiibo will be released on 11 September, one of them as part of a limited edition Super Mario Maker bundle. Tap these amiibo to add a Big Mushroom power-up to your course and add a retro visual filter to the game!

From NintendoWorldReport, details on BestBuy Demo:

– 10 worlds;
– 4 levels apiece;
– The Mystery Mushroom levels “Body is Ready” (with Wii Fit Trainer) and “Adventures of Link” include nice touches like WFT’s voice coming out of the GamePad and Link drawing a sword when he comes to a stop after running;
– “10 Mario” mode makes you clear eight random worlds (complete with a requisite Peach kidnapping cutscene), within 10 levels;
– The quick test the representative did before the demo had the Adventures of Link, then “Automatic Mario 4”, and the tech got 1-ups when he completed the second level without getting hit;
– “Leap of Faith” level: sets up a death jump unless you can fit through a one-block wide gap to hit the flagpole;
– “Beetle Surfing”: sets you up with a Buzzy Beetle helmet, then has you jump on another Beetle and ride it for half the level;
– Other demos feature speed challenges;
– In one level, a Star was provided and had you sprint to the finish in under 10 seconds;
– “Swim Faster!”: swim through a field of the Jelectro from Super Mario Bros 3 and get to the end in 50 seconds using Super Mario World physics;

Takashi Tezuka said the following when Game Informer asked about the ability to upload Super Mario Maker creation videos and replays to YouTube:

We thought about having YouTube uploading, but it’s not in our game. The reason for that is other than just watching movies of courses, we’d rather players play them and experience them in that way.

Here are a few more details compiled by Nintendo Everything, including on online functionality:

– Follow your favorite makers;
– Can see how many people have played each of your courses;
– Nice pictures showing an overview of the course;
– Can name your course whatever you want (Nintendo will have fun with this one);
– Star Ranking – essentially courses ranked by popularity, give stars to what you’ve played depending on how much you liked it;
– Featured – levels picked by Nintendo to be featured;
– Up & Coming – things that haven’t been ranked, or just came out;
– Can filter by difficulty (easy, normal, expert), by time period or by location;
– Difficulty determined dynamically by how many people completed the course;
– Can see clear rate (both percentage & number of attempts and number of completions;
– Can leave comments on level at any time (while playing or after completing it);
– Seems like there’s a search option;

– The various Mario generations have different rule sets;
– Ex: 8-bit Mario can’t pick up a koopa shell, while the others can;
– When you upload a level, it must have been beaten at least once, by you;
– This is an effort to avoid totally unbeatable levels;
– The disc will ship with several levels on it;
– Levels can be downloaded and altered, but never re-uploaded;
– This is to ensure that a level remains locked to its rightful owner;
– You can only upload 10 total levels at one time;
– This number can increase though if your levels are popular and receive lots of positive votes;
– There is a 100 Mario challenge that involve playing randomly selected courses from across the internet;
– There are curated lists by Nintendo, you can track a specific uploader, or browse using all kinds of specific filters;
– A stage’s difficulty rating is dynamically set;
– The more players who can finish it, the easier the rating will be;
– The Mystery Mushroom changes Mario, but only cosmetically, so he will still function the same for all gameplay purposes;
– Scan amiibo to play as them, but only when you find a Mystery Mushroom;
– Link, Marth, Isabelle, Yoshi, Luigi, Wii Fit Trainer are confirmed amiibo thus far;
– It is unclear if these other characters can also grab power ups, or how long you will even remain in this form;
– Enemies can be spawned from blocks, even from power up blocks;
– Mario can utilize various transportation items, even Bowsers floating ship from the end of Super Mario World;
– Enemies can be placed in the water even if they don’t naturally live there, examples being Goombas and Bowser;
– Enemies who didn’t normally have 8-bit sprites now have them, such as Wiggler;
– Baby Bowser is in the game;
– Enemies can appear from pipes, even if they don’t belong in there, such as fish or Koopas;
– Magi Koopa is also in the game;
– As if Bowser needed help, but it was shown that players can place items on him;
– Playtest the game immediately by double tapping the screen;

According to them, the game will come with some pre-loaded courses for people to play and build from, in addition to a book that will also help inspire them while creating their own courses.

We also learned from the Treehouse show in a spontaneous announcement that the four Nintendo World Chapionships courses will be included in the final version of the game.

Here’s a fact sheet with an overview of the game: 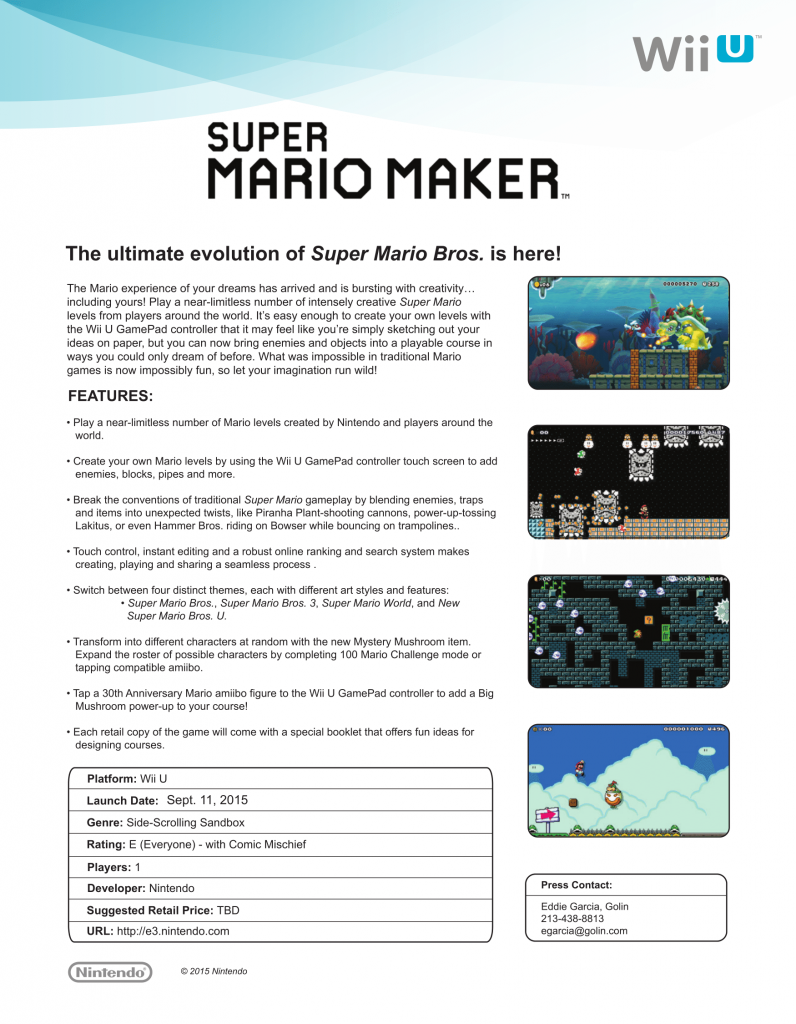 And here’s a gallery with lots of screenshots and artwork, including the 8-bit 30th Anniversary Amiibo: