Square Enix’s details focus on the various multiplayer aspects of the game. Here’s a rundown of the details.

– Players can have battles and trade monsters with each other;
– This is done through Local battles, which consist of “1-on-1 Battles” or eight team maximum “Grand Prix Battles”.

– You can battle against rivals and compete for the title of ultimate monster master;
– Deciding which monsters to ride in “Team Organization” is an important element;
– “Judge Points” are displayed at the bottom of the screen and are the key to victory;
– Your Judge Points will increase by attacking, using special skills and effects, and defeating your opponent’s monsters.

– Through Streetpass you can fight other players teams that you pass in the streets;
– Like with Local Multiplayer, you can still test your skills and win Communication Coins;
– You can also scout rival team’s monsters throughout the whole town;
– You can set a team of monsters in the menu to be passed along via StreetPass;
– When you’re set to ride a monster in battle, your character will appear riding that monster;
– Your customizations and such will be reflected;
– You can scout a single monster up to Rank A in battle, so when you come across a monster on a rival team that you want, attack it boldly.

– If you activate SpotPass, you can receive valuable items, treasure chests, and various other good things;
– Sometimes a Stealth Box will appear in the Internet Multiplayer Plaza;
– Special battles with special teams including rare monsters may also be triggered.

You can find the screenshots Square Enix shared with this update in the gallery below:

Jump magazine touches on another game feature called the Great Riders Cup, which can be accessed by going through the story up to the point where you meet a Nochora who organizes the event named Chomach.

The Great Riders Cup is made up of battles with up to four participants, with each riding a monster. The objective of the matches is to gather slimes that are spread around the field and carry them to your goal to rack up points.

Each monster type has its own moveset of two attacks that can be done with the X and Y buttons. They also have stat distributions that don’t depend on the monster’s level, but solely on their monster type. The lower right of the screen has a tension gauge which can be used to make the monster dash when a stock box is filled.

The field will also have items with helpful effects, such as “Shield” which protects you from an attack once, and “Bomb Stone” which reduces an opponent’s score if thrown towards their goal. If you win the complete match, you’ll earn experience points for your monster and sometimes items in addition for use in the main game.

Finally, the Great Riders Cup can be played not only solo with CPU opponents, but also in multiplayer through local and online connections.

Here’s the magazine scan related to this information: 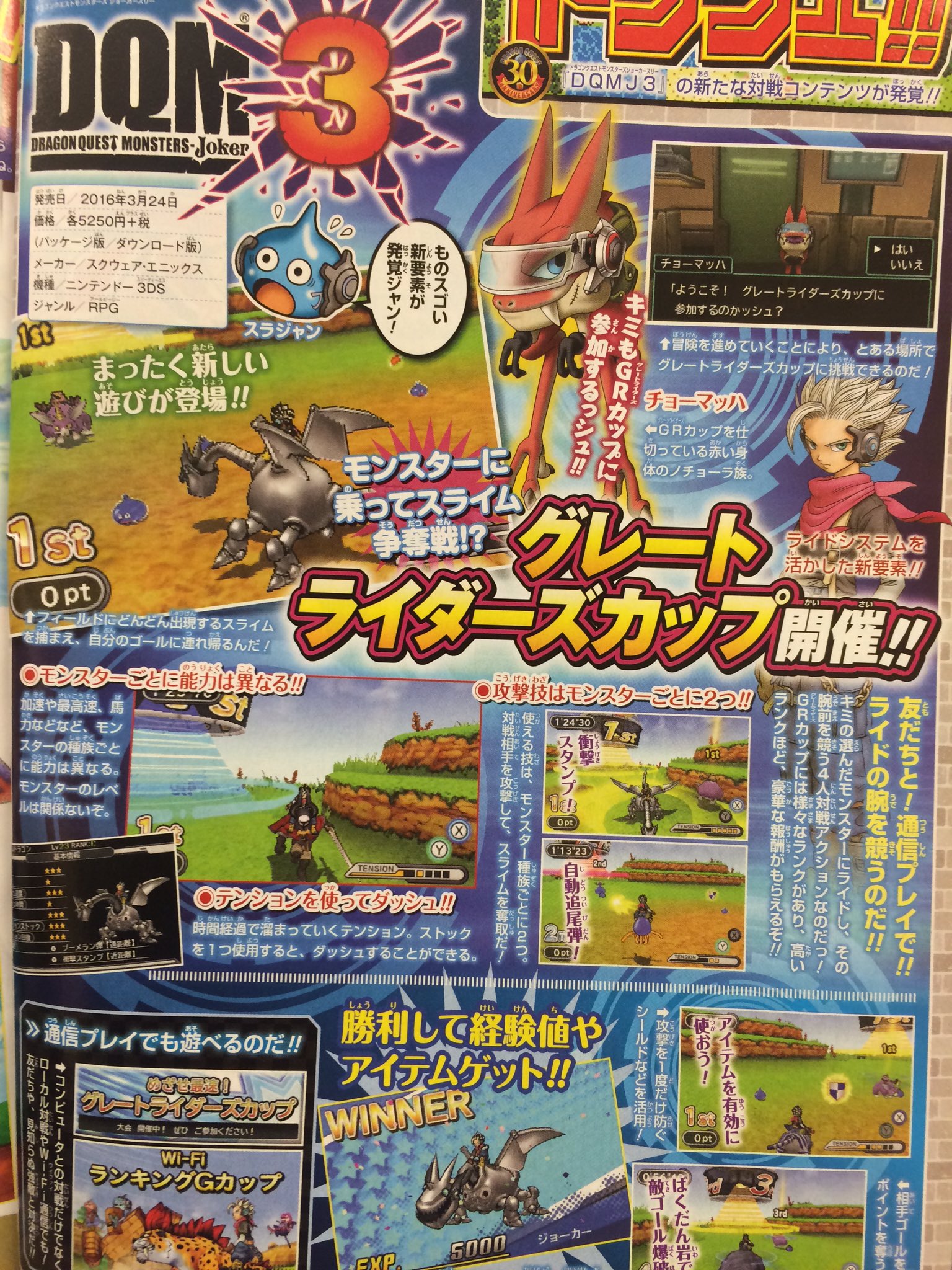 Nintendo has finally launched the European website for Bravely Second: End Layer. You can find it here.

You should probably take a look at the Battle section for the Advanced Techniques videos and an introduction to the game’s various jobs.

Nintendo UK also uploaded a brief video showcasing a sneak peek at the Bravely Second art book, which will be included in the North American and European versions of the game’s collector’s edition. Check it out below:

The unboxing video below by Time to Level Up, also gives us a good look at the Agnès Oblige figure included in the Collector’s Edition. Take a look:

Capcom released a new batch of screenshots from Ace Attorney 6 during the week. Take a look at them in the gallery below:

In them, we can take a look at the Gold Mega Man amiibo, which seems to come in a generic unbranded package that you have to open to use the amiibo. The box also includes six postcards with art from each game, on top of sticks, a card to download 18 tracks from the soundtrack, and two 3DS themes inside the game box.

You can take a look at the photos in the gallery below:

It is stated in the magazine that Dragon Ball: Project Fusion features your own main character, but it’s still unknown if you can really modify him similar to the series’ lastest entry, Dragon Ball Xenoverse. Jump also mentions that you’ll be the one doing the adventuring, and you’ll meet with legendary fighters.

A first look at a brand new character called Pinijji is also shared (he’s the character with spiky black hair in the scans). Jump doesn’t say who he is or what his role will be though.

Below you can find the magazine scan: 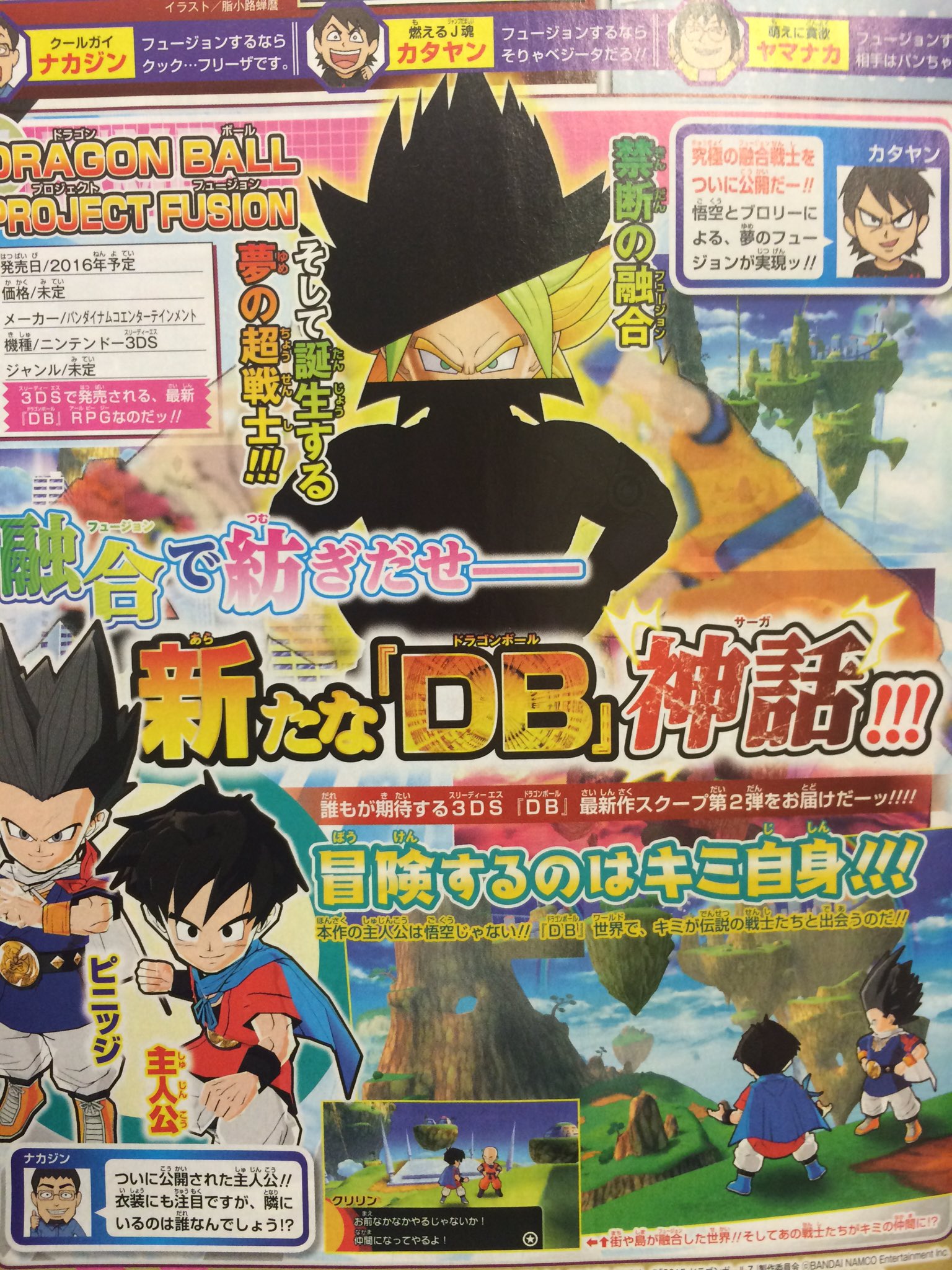 Bandai Namco has recently released a demo for Haikyuu!!: Cross Team Match in Japan, so you can find a new trailer and some demo footage below.

Bandai Namco has recently released a new batch of Assassination Classroom: Assassin Training Plan screenshots and art. Check them out in the gallery below:

SEGA has recently released the first English 7th Dragon III Code: VFD trailer. The publisher showcases the role of the dragons in the game in this video, which you can find below.

Now that Shin Megami Tensei IV Final is out in Japan, Famitsu magazine interviewed some of the developers behind the game, including character designer Masayuki Doi, producer Kazuyuki Yamai, and sound composer Ryota Kozuka.

During the interview, they talk about the franchise in general and Shin Megami Tensei IV Final specifically. The team also spoke about what elements define the series, character design and music composition, among other things.

If you are interested in reading the interview, check out the full translation at Nintendo Everything.

You can also find the firsts 70 minutes of the game in the video below, courtesy of TiLMENDOMiNATiON.

In it, we learn that the game will feature online and local multiplayer, where up to four players can participate in battles.

Marvelous’ Return to PopoloCrois: A Story of Seasons Fairytale is now out on the European 3DS eShop. You can find the game’s launch trailer for the region below.

Marvelous recently launched the website for Story of Seasons: Cherished Friends of Three Towns, which offers an overview of the game’s systems and provides a look at two new characters from Tsuyukusa Village – Kasumi, a marriage candidate for the male main character and Yuzuki, a marriage candidate for the female main character. Gematsu has translated some basic info about these new characters, which you can find quoted below. 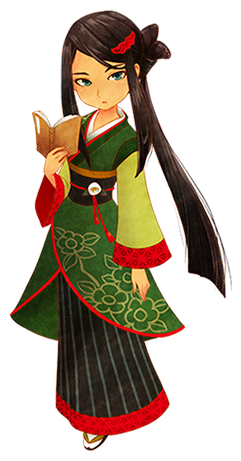 Kasumi is a teacher in a private school outside of Tsuyukusa Village. She’s a quiet girl who rarely talks to men her age, but she loves riding horses. 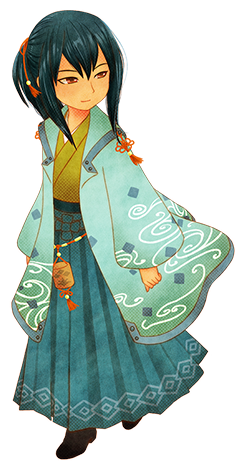 Yuzuki is a gentle but frail young man who makes metallic ornaments for a living. He likes sweet foods and can usually be found at his workplace.

The website also features some new video clips showcasing the character creation process, how tending to animals and crops works, and a bit of farm creation. You can find them below:

Kotaro Uchikoshi has recently announced on Twitter that he’ll be visiting San Francisco for an “unveiling presentation” dedicated to Zero Time Dilemma. This will happen during the time of GDC, which runs between March 14 and March 18.

Meanwhile, the CrashKeys Twitter Account has posted another character artwork for “Participant 3”, which you can see below. 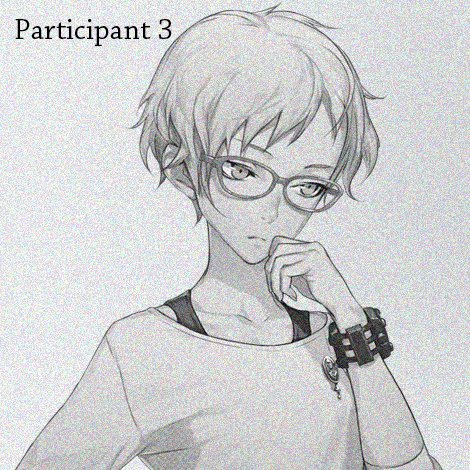 Aksys Games, SCRAP Entertainment and Spike Chunsoft have also announced that an escape room based on the Zero Escape series will open on April 15 at Weller Court in Los Angeles.

“Real Zero Escape: Trust on Trial” will offer “an all new custom scenario centered in the Zero Escape universe and puts players inside a locked room with a mere 60 minutes to escape”. 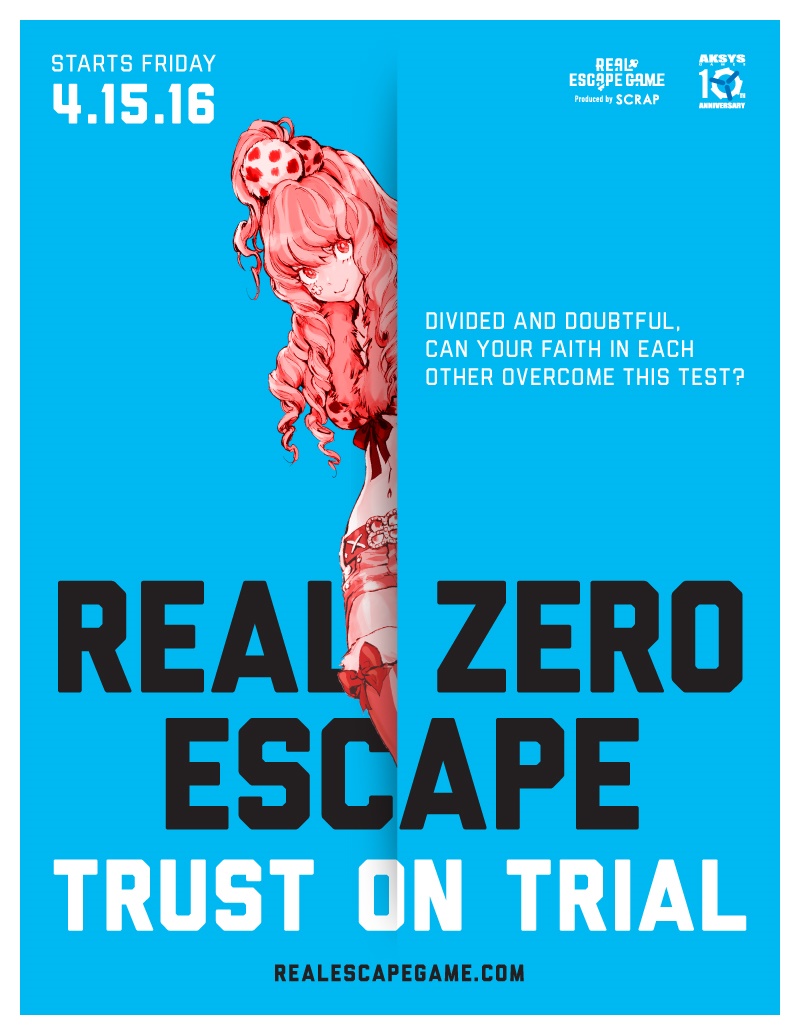 GungHo Online Entertainment has recently announced that Puzzle & Dragons X is launching in Japan on July 28. The retail version will be priced at 4,800 yen while the digital release will cost 4,074 yen. Reservations for the title begin on March 16.

The game will come in two versions, God Chapter and Dragon Chapter, with each one having some unique monsters. The games also feature a Capture Mode, co-op, and a battle mode.

Meanwhile, the manga adaptation by Momota Inoue in CoroCoro is starting with the April 15 issue, and the anime by Studio Pierrot is planned to start on July 4 on TV Tokyo.

You can find the first trailer for the Puzzle & Dragons X game below:

Badai-Namco recently announced that the mobile game Atsumete! Ojipockle (Finding Ojipockle!) will be getting a Nintendo 3DS version in Japan, come next month. It’s to be called Mitsukete! Ojipockle Plus, and will cost 600 Yen. The title will be released on March 2nd.

You can find a trailer and music video for it below:

During last week’s MAGFest event, Keiji Inafune and Inti Creates hosted a panel. In it, Azure Striker Gunvolt 2 was featured and an update regarding what’s happening with the project has been given.

It has been revealed that Gunvolt will have a new design in the sequel game and that Inti Creates redid all of the character sprites in order to achieve this. The company also teased “a whole lot of stuff” that fans have yet to see. The team is spending a ton of time to create “the best high-quality game they possibly can”. No release date was given yet again, but Inti Creates CEO said the developers are “working very hard to be able to get you guys the sequel to Azure Striker Gunvolt as soon as we can”.

Most importantly, the first gameplay trailer for Azure Striker Gunvolt 2 was shown, which you can find below, followed by another video with the game’s main theme:

Below you can find a trailer for the Japanese Virtual Console version of SEGA’s Shining Soul.