Updated with the daily japanese video below:

As various media formats have started getting their ends on Super Mario Maker and exploring the game, we now have some extra details from the instruction manual.

It seems like players will only be able to upload up to ten courses initially, but that number can be increased if enough users “like” the player’s courses. The manual also states that unpopular courses will be deleted after a certain period of time. Moreover, in courses that use recorded sound effects, they will be replaced with a generic parrot’s squawk when played online.

One player has also found out the shortest possible course you can make, which you can see in the picture below: 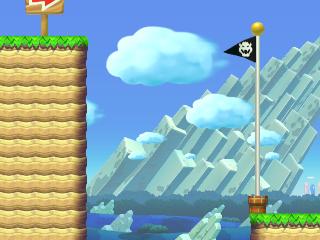 It has also been uncovered that Super Mario Maker features a fly-swatting mini-game, just like Mario Paint on the SNES did. You can watch some footage of it below:

Finally, you can view some screenshots of the various available costumes below, followed by some videos which contain most of the amiibo costumes too.