Moreover, in their most recent update, they also share new information regarding the post release DLC in Europe. You can read it below:

Perhaps now that you’re a little sated after seeing the unboxing video, (and we hope to see your own come launch!) SENRAN KAGURA 2: Deep Crimson will be launching on the 27th August, 2015 for £24.99/€29.99 on the Nintendo eShop – alternatively we have the physical version available on our own Marvelous Store, and the Standard Edition also available on Amazon at launch (although without the lovely art-cards!)

The Additional Chapter Add-On Content come in three entirely different flavours, titled ‘Waist Deep’, ‘Hipster’ and ‘Busticated’ – each containing five missions, as well as a plethora of weapons, illustrations, backgrounds, clothes, hairstyles and more! ‘Waist Deep’ follows the hijinks of Mirai as she afflicts the SK girls with a certain “ailment” in her quest for a bigger bust – ‘Hipster’ looks to an alternate reality as Hanzo battle a world dominating HEBIJO in a bullet hell-like setting with a SENRAN KAGURA twist. Finally ‘Busticated’ follows Asuka and Mirai’s quest to achieve their most dream bust sizes, completion of this jovial story arc will reward you with a certain “modifier” in the Dressing Room!

Look forward to some preview videos of each Add-On Content as the release schedule roles around!

Well the 27th is just around the corner, and we’ve still got plenty of boxes to pack and ship this week, so we can guarantee you will all have your lovely editions next Thursday! We hope you’re all looking forward to it.

Finally, XSEED has announced that the game has gone gold and is to receive a “Double D Edition” at retail, which comes with two music discs containing a total of 60 tracks that represent the game’s entire score. Price is to be set at $49.99. Senran Kagura 2 will also be sold on the eShop for $39.99. 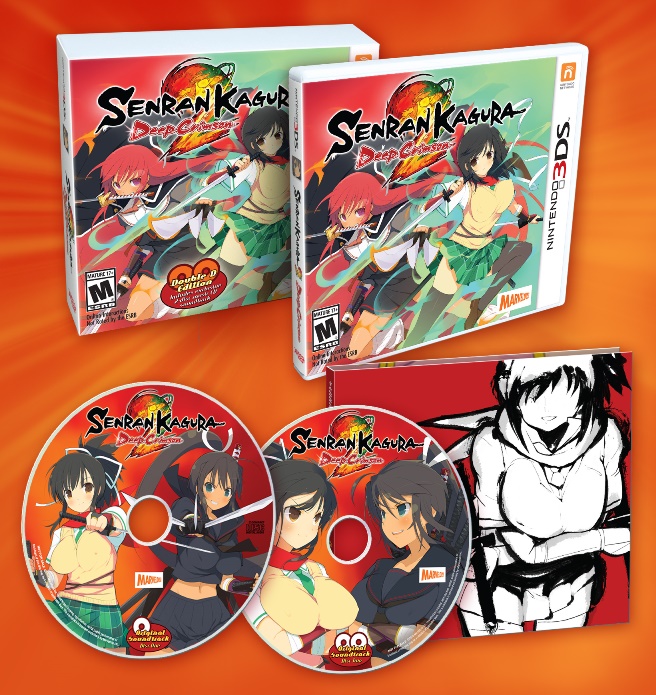 XSEED is also celebrating today’s news with an eShop discount on Senran Kagura Burst. It will be on sale through September 14 for $19.99 (normally $29.99).

You can also find a final official overview and trailer of the game below:

Once again showcasing the series′ trademark high-flying, clothes-ripping battle mechanics, SENRAN KAGURA 2: Deep Crimson follows the events of SENRAN KAGURA Burst, sending all 12 of the original cast members on another supernatural martial arts adventure through modern Japan. For the first time in the series, shinobi can fight in pairs, covering each other’s backs and combining special techniques as needed, or fight alone to give their partners time to recover after bouts of intense combat. One player can control both team members, switching back and forth at will, or two players can fight side by side in local or online co-op mode.